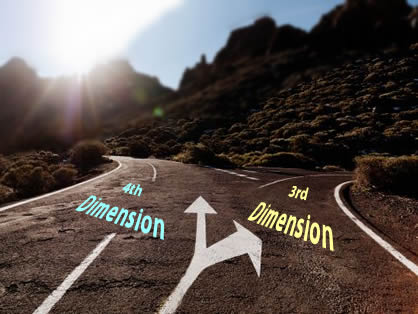 The fourth dimension is now our arena.

When asked to give a simple definition of this dimension, Edgar Cayce answered with a single word: “idea.”

The fourth dimension is the realm of ideas, the world of the imagination where we can make anything happen. It’s a big world, infinite; certainly big enough for one to get lost within it unless you know the secret of navigation.

Because of the octave leap in vibration from third to fourth dimension the Astral Body is of a higher vibration known as etheric and fourth dimensional perception of past, present, and future is more fluid, as the laws of time and space change.

On the fourth dimension, we can reintegrate our group identity without the loss of our personal ego, as it is the last vibration where physical vehicles are used to contain individual consciousness. However, because of the fluid nature of time and space our astral forms naturally morph. Hence, there is a huge mobility of form. It is the realm of the “shape shifters” of which mythology speaks. A shaman or holy person who can shape shift has learned to ground their astral form upon the third dimension so completely that they can temporarily change their third dimensional form.

Drunvalo Melchizedek, author of several books on consciousness, tated that the fourth dimension is “a thousand times more interesting than here [3rd dimension]. Every breath is like an eternity; it’s so special. We have lost our connection to God here and we don’t remember what it’s like to have God in and around us, moving through us, and to be intimately connected with God, so that, whatever you’re thinking and whatever you’re feeling is directly created. You could go into the fourth dimension and actually recreate the third dimension….you quickly realize that whatever you’re thinking starts happening, and the whole idea that we are separate becomes meaningless very quickly.”

This amusing paradox shows the problem of discussing the fourth dimension with terms derived from the three dimensional world.

Contemplating the fourth dimension is a very useful exercise. The fourth dimension offers a novel and intriguing addition to our worldview that is becoming particularly important today. It provides the necessary stage upon which we can experience the reality of the soul. At a time when more and more people are wanting to have a relationship with soul, it is important to reckon with its fourth dimensional nature.

Much of our third dimensional life also exists upon the fourth dimension in a format of a higher vibration, but we are not aware of it because that reality is NOT in sync with our physical time and space. We can have a dream of an entire lifetime and wake up to find that only five minutes of our physical time has passed. Our astral reality, as well as our other physical incarnations, is not perceivable to our third dimensional self unless we have remembered our Multidimensional Consciousness.

Author of Spiritual Unfoldment: A Guide to Liberating Your Soul, Richard Barrett stated that “we have blocked out this perspective with three dimensional conditioning.” when asked why we are not more aware of the fourth dimensional realities.

Three-dimensional awareness has the basic qualities, Barrett explains, of time, space and matter. These qualities creates the experiences of separation, death and mass. Fourth dimensional awareness, on the other hand, has the basic qualities of timelessness, spacelessness and energy. These qualities create the experiences of unity, being and flow. In the fourth dimension, there is consciousness of eternity, where past and future simultaneously co-exist.

There is consciousness of omnipresence, in which everywhere is located right here.

However, our astral body does exist and its highest vibration is our Spiritual Guidance. Much like a person upon a mountaintop can observe and guide the residents of the valley below, our higher astral self can observe us upon the third dimension and give us guidance. Through the expanded perception of our fourth dimensional self we can create great changes in our physical world.

The emotion of fear and a fixation on external circumstance are symptoms of attachment to the 3-D world.

♥ Love is an expression of the fourth, a shared awareness with all energy forms of our essential unity.

♦ Intention is the secret of navigating in this realm.