Awakening the Energies of Love 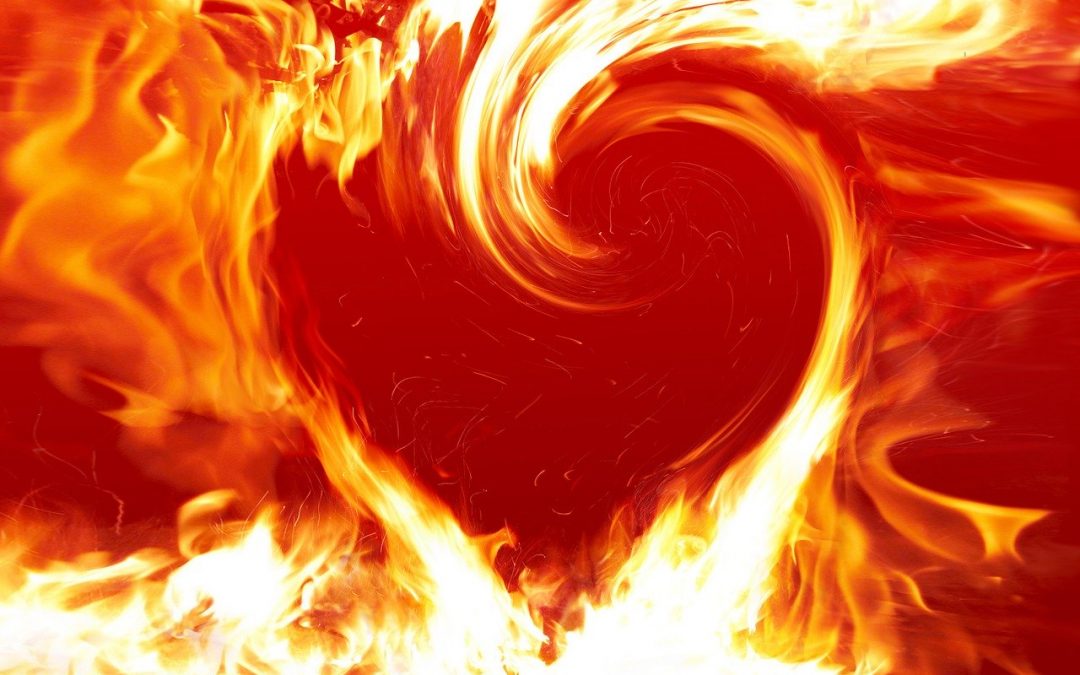 Awakening the Energies of Love
By Anne Hillman

At a national professional conference thirty years ago, I stood
before a hand-painted poster that so captivated me, I wanted it the way a
child wants a treasure found at the beach. Since then, that sheet of
newsprint has hung where I see it every day. The paint is faded and the
paper worn, but Teilhard de Chardin’s message is timeless:

When man discovers Love,
He will have discovered Fire for the Second Time.

I didn’t know
the quote or realize it had been distilled from a longer one, but the
power of the single phrase that called Love ‘Fire for the Second Time’
never left me. I recognized in its simplicity something I had always
intuited—that this kind of Love was not the romantic love I’d sought as
an adolescent, nor was it the love of a woman for her husband, or a
mother for her child. It was something more—something at root, seminal,
and forever indefinable. Later, when I saw Teilhard’s original words,
they gave voice to a much larger vision—one that spanned the story of
the human race:

Someday, after mastering the winds, the waves, the tides,
and gravity, we shall harness for God the energies of Love,
and then, for a second time in the history of the world,
humanity will have discovered Fire.

Then I
understood. The awakening of Love in the human heart was the spiritual
journey of our Time: it heralded a transformation that would be as
life-changing for each of us—and for all those we subsequently
touched—as the taming of fire had been for our ancestors in the wild.
Deep within me, I knew that this Love called Fire had wooed me from the
earliest days of my childhood—I had felt it in my bones. Still, I longed
to understand what Teilhard meant, for it was clear that the Love he
described in such vivid language was more than a feeling, more than
consolation, companionship, or goodness. It was a great Power.

I spent the
next thirty years living into the questions his koan raised. It shaped
my life. What was this kind of Love? How do we harness it? Why energies?
Why Fire? To put what I eventually realized into words—to say what Love
was not, as well as to express the depth of transformation it
implied—became my soul’s imperative, and was eventually given form in
Awakening the Energies of Love: Discovering Fire for the Second Time.

There is only
one ancient and forever work of art: the slow fashioning of life and the
gradual awakening of Love. The invitation to participate in Love’s
measured emergence is our call; our yearning is to meet it face to face.
We can’t avoid this transformation! Although we might resist (however
unconsciously), we are all already awakening, all being carried on the
same tide, drawn by the call and our yearning as inexorably as the moon
draws the movement of the waters. Still, it is so gradual a process, we
don’t ordinarily notice what is happening within us.

There are those
in every period, however, who awaken quite suddenly—not only spiritual
masters, but our greatest poets, philosophers, mathematicians and
countless ordinary people. These spontaneous awakenings are occurring
more frequently today than in the past, and they are quickening all of
us. If you are one who ‘wakes up’ abruptly, you become aware of the vast
difference between having thoughts about love . . . or feelings of love
. . . or sensations associated with love . . . and coming into a deep
relationship with Love itself. In such a moment, you have awakened to
the felt energetic connection between human beings and the whole of
creation.

The power of
Love may leave you streaming with energy, but this is not a momentary
‘high’—it’s more like a continuous ‘refining fire’ that works within you
at a fundamental level. An awakening burns away all your old ideas
about who you think you are—an undressing that takes your identity
apart, recreates it, and leaves you vulnerable to the greater life. The
self that emerges is not really what you’d call an identity; it’s more
like a sense of personhood that includes all you know yourself to be—and
more. The late Irish poet and philosopher John O’Donohue called this
quality of self ‘soul.’ “The soul is not simply within the body, hidden
somewhere within its recesses. The truth is rather the converse. Your
body is in the soul, and the soul suffuses you completely.” This self
provides an alternative way of relating to others, a new and tender
connection with life. You live not in but as relationship.

Probably most
of us got our ideas about relationship, how life works and who we are
from parents, caretakers, and teachers, and later, from respected
professionals like historians, economists, or sociologists who appeared
knowledgeable about navigating the world. Today, however, these experts
understand the new terrain no better than we do. If we are to respond to
our increasingly urgent challenges, we will need to find a different
way.

Transformation
is most profoundly catalyzed at the great hinges of Time—times like ours
in which everything around us is radically changing. Our present moment
is filled with conflict: between countries, between religions, between
people with conflicting beliefs, opinions and solutions. If we are to
embrace our many differences, we need to hold them in a way that unifies
rather than separates, that frees us from judgment, fear and
prejudice—and the suffering and violence they spawn.

Awakening
offers that way. Its gift is the possibility of a new orientation that
provides the necessary energy, motivation, and power to support creative
responses to threat. Then we need to learn how to live within that
Field. The real transformation does not begin for any of us until we
take responsibility for the quality and direction of our attention: when
we soften our focus, remain alert, and drop deep into the silence of a
self we know well enough to be able to let go of the slightest
aggression in mind, heart, and body. This is not a matter of thinking
differently. It is a matter of learning to inhabit our selves. We do
that by becoming as honest as we can. Ours is a creative inquiry with no
map. As we grow in truth, however, we come to access life in a far more
immediate way. We turn our attention to the Field in which we live and
listen, not with our ears, but with a self that is vast. Our entire
organism has become an instrument within which and with which we note what is happening—then ‘listen’ for Love’s way of responding.

No matter where
you are in the awakening process, there are countless doorways to this
orientation. In my own spiritual practice, I needed to be embodied. I
learned to drop, first, from a head full of thoughts, down into a
breadth of human feelings. They took me down into the darkness of my body—and then beyond, to the wordless depth—stillness, simplicity, ease.

You know this
place. You are carried on an unseen current the way a seagull hangs in a
strong wind over the ocean. It is effortless. You are lived by Life,
itself.

Not long ago, I
flew into Burbank, California to visit my daughter and was on the road
before seven-thirty. It was a foggy morning, but something led me to
turn my attention to that mysterious depth, and I dropped into its
embrace. Ordinarily, I’m pretty tense on California highways and more
than a bit fearful—other drivers can be aggressive at times, and fast.
But that day, alert and wide open to the unknown, I was aware of a
difference: How pleasant the drive seems! How courteous the drivers, even in rush hour! No one tailgating, no one cutting me off.
It felt utterly remarkable. I’d driven that freeway countless times,
and as I slowed to take the Topanga Canyon exit, I turned east—in the
opposite direction from my daughter’s home! Continuing along the road, I
felt slightly uncertain. Did I miss my turn? No, I reassured myself, I could drive to her house in my sleep! Still, the surroundings seemed a little unfamiliar. Oh, it’s the fog. Nothing looks the same in the fog . . . . Further on, I really began to wonder: Didn’t I ever notice these houses before?

When a large
Sears Roebuck showed up, however, I knew I had never seen it before. I
decided to call my daughter and turned into the store’s huge parking
lot. That early, it was completely empty, but I made three very mindful
turns. Each offered the choice of two parking areas, all with at least
500 spaces. The last turn took me into a long empty row right next to
the highway I’d left. Half way down, a space looked inviting. I turned
in, pulled on the brake, and phoned my daughter. “I’ve taken a wrong
turn on Topanga. It’s probably ten miles out of my way.” “Oh, mom, have
you by any chance noticed a Sears Roebuck out that way?” “Why, yes!
That’s where I’ve stopped to call you.” “Mom, would you mind doing an
errand for me? There’s a tiny vacuum cleaner repair shop right across
from Sears on the other side of Topanga Canyon Road. We really need the
part they fixed today. Could you pick it up for me?”

I glanced up
and peered through the fog. “Why, hon, it’s straight across the street.
My headlights are shining right on its door.”

Such simple
experiences shine a light into a place we don’t often look—an
intelligence that does not belong to us, that is not of the thinking
mind. I’d set no intention, had no expectations or desires. But I’d been
learning the language of Love. When I told my daughter how the morning
had unfolded, she said, “Mom, you have the whole universe behind you!” I
replied, “So do you! Everyone does!”

Harnessing the Energies of Love—an Alternative to Polarization

So do you.
We’ve all had moments when the grace of an unexpected shaft of light
breaks in on our ordinary world and leaves us in awe. At those times, we
know there is much more going on around us than we are able to see or
feel—a fullness to existence that we’ll never be able to name, much as
we long to do so. To call its revelations ‘synchronicity’ scarcely hints
at its majesty; to name our stumbling upon it ‘intuition’ barely
touches the edge of the holy garment that enfolds us. This immense Power
behind the life we discern with our thoughts is more than we can
symbolize: more than nature, more than physics, more than Jung’s Self or
the luminous universe.

When we learn
to rest in its energies, otherness dissolves. Then we are living as
relationship. We turn to a handful of so-called strangers and know them
intimately; know the ancient redwoods in the same way; the stone cliffs,
the meadow, and the light shining on the river. We are rapt at our
kinship with a blazing world. It is lit up from inside.

We are
intended—have an innate tendency—toward this kind of communion, and
whatever humility, sanity and compassion we manage to offer our planet
at this chaotic time will be its gifts. Staying attentive to it is the
necessary change of mind. It is not the fact of thought that is at
issue; it is our inability to withdraw our attention from thought. But
once we‘ve learned to let our thinking serve this qualitatively
different consciousness, we will have harnessed Fire—and become
instruments of a Love, a peace, and a kind of perception that the
current view of the world finds utterly incomprehensible.