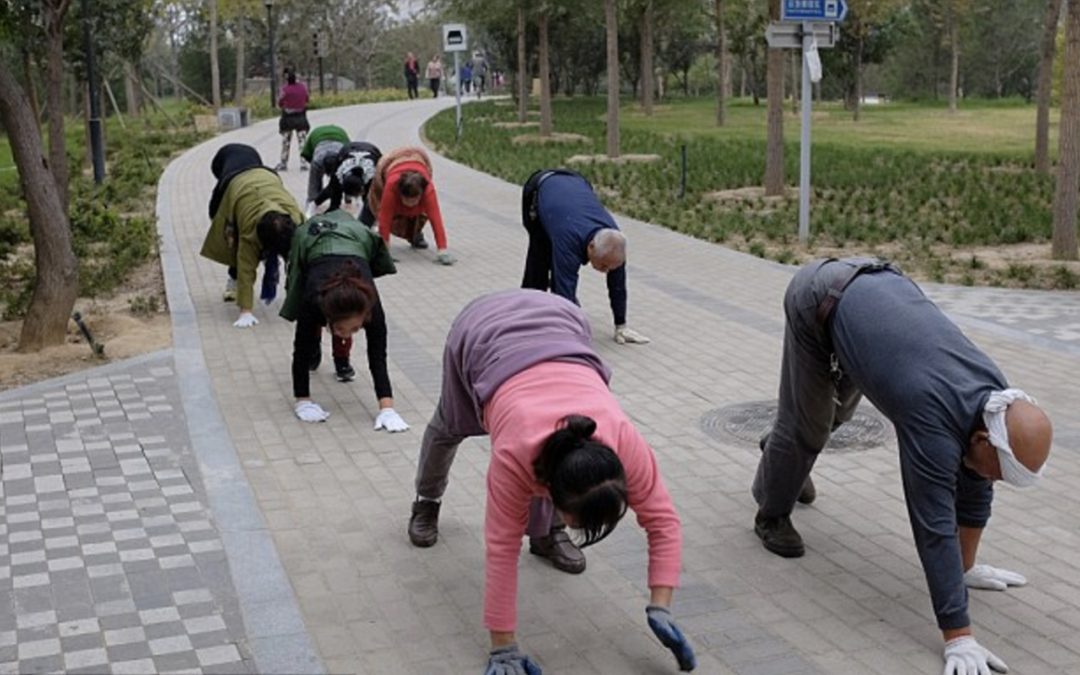 The world-changing threat being presented to us by mass media and government officials takes two forms:

To discern the truth independent of official sources is difficult in light of increased censorship—not only within mass media itself, but also of alternative voices in media, social media, health, and other sectors of society. With even the search engines corrupted by pharmaceutical bias, independent research becomes a challenge.

To assist you in finding quality information so you can make up your own mind about the “facts” from a diversity of sources, I offer the following compilation from my own efforts. While I am not a scientist or health professional, I can bring my skills as a professional editor to bear in this search for truthful information. Just as I use my own discernment to select sources I find credible, you must use your own discernment to find the facts and narratives that most resonate with your experience and common sense. 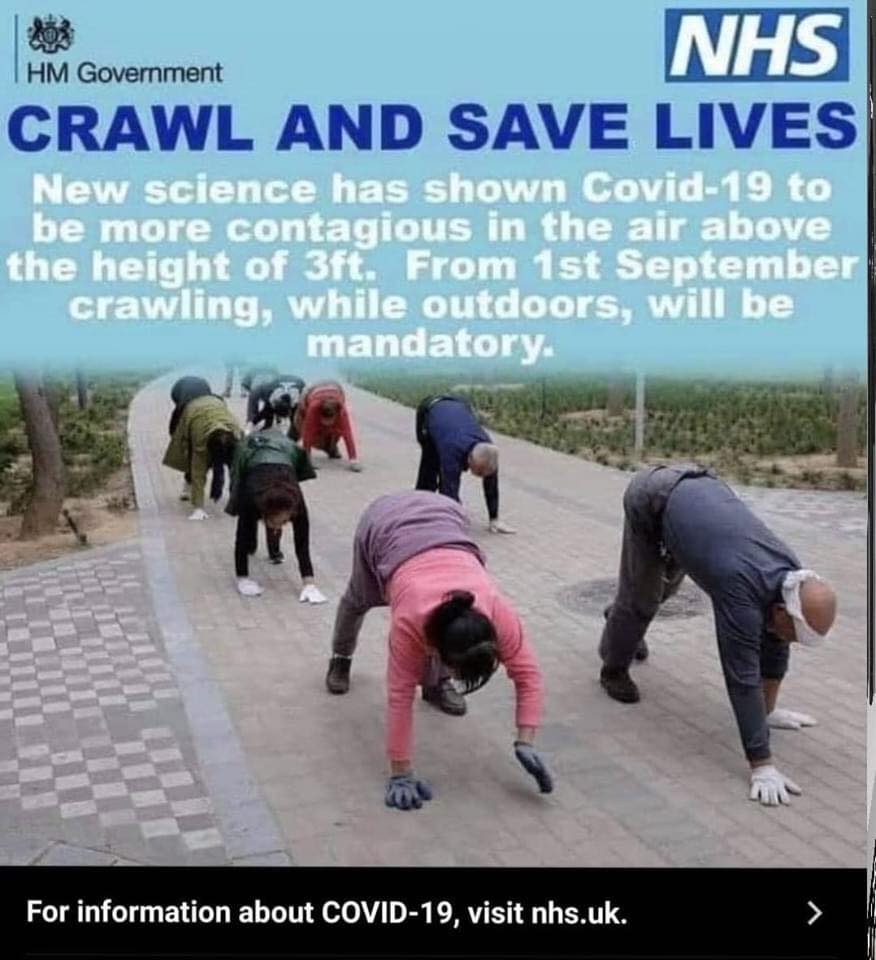 Lists of Articles and Videos

3 Must-Watch Videos for Information and Inspiration

The World Health Organisation was established solely to market Western medical products worldwide and at the most profitable rates possible.

…
The WHO… declared a global pandemic under the most spurious conditions with the full knowledge that this would not only permit a shutdown of the economy (for political and economic benefits I have detailed elsewhere) but to create something only logical—the Pharmadollar….

—Dr. T. P. Wilkinson, Inferno and the “Fourth Circle”. The American Empire and the 2020 Pandemic

See also: Is the Coronavirus Scare a Psychological Operation? by Kevin Ryan, for how much the WHO cares about Black Lives in Africa.

10 Sources of Alternative News and Opinion

Foreword: ERCDed by the Headlines

Yes, I’m irked by the headlines. One, because they are driving a mass state of fear and compliance to support a narrative that is not being examined, but rather slavishly and even enthusiastically amplified, in the mainstream press. No doubt that’s good both for an unbeatable combination of public addiction, advertiser support, and editorial consistency under oligarchic ownership and government oversight. But it’s bad for journalistic integrity, critical credibility, and democratic debate.

When I was fifteen my lacrosse coach counseled us on the use of the stick: “It’s a tool, not a weapon.” The same should be said of the English language. And the moral choice of a journalist is to use that tool not blindly or unconsciously, but accurately to serve the public interest. Therefore I’m irked by headlines that reveal either outright complicity with propaganda, or unconscious bias toward the dominant programming of the day—what is casually termed, in global control circles, a “psychological operation.”

Perhaps the print version above was created for brevity—at the cost of misinformation. As I pointed out in my letter to the editors in response, “A closer read reveals a more accurate statement, that it was the café owners, following an employee’s positive test result, who actually “closed the restaurant.” Maybe that’s nitpicking… or maybe it’s an instructive microcosm of the more serious issue of how COVID is framed in our thinking.“

The second part of the online headline is more elusive: “contracts COVID-19.” In this case, we were told, the employee’s positive test was accompanied by actual mild symptoms: “a sore throat and noticing something was off with his sense of smell.” So technically the statement is true; but it misleads by reinforcing  the pandemic narrative, of a dangerous public health emergency. 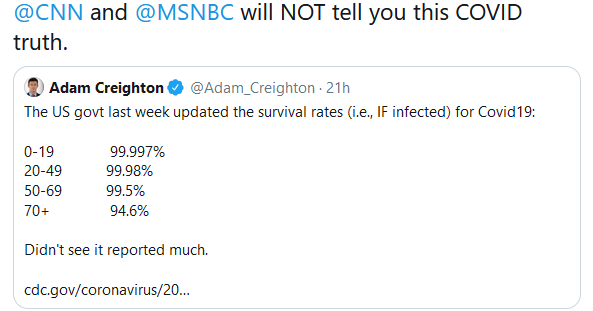 A related word conveys a shade more serious medical connotations, in this headline from CTV news:

“Half a million U.S. children have been diagnosed with COVID-19” (CTV News, 8 September)

The word diagnosed appears just once more in the article—in the lead sentence: “Half a million U.S. children have been diagnosed with COVID-19, according to the American Academy of Pediatrics and the Children’s Hospital Association.” It disappears thereafter, and the links to these institutes of unknown patronage show only website homepages. Instead, the segue is complete to a raft of references to that catch-all catchphrase, “cases”:

The groups said 70,630 new child cases were reported from Aug. 20 through Sept. 3. This is a 16 per cent increase in child cases over two weeks, bringing up the total to at least 513,415 cases, the groups said in their weekly report on pediatric coronavirus cases.

No mention of actual death, disease or symptoms. Yet the conclusion is painted in stark, ominous tones: “These numbers are a chilling reminder of why we need to take this virus seriously.”

Similar instances have arisen in my editing work, with research articles probing the tourist industry where “the pandemic has caused widespread devastation.” Even without engaging in the problematics of the term pandemic—itself an arbitrary operational term announced by the WHO—I have to challenge such usage pointing out the critical but otherwise unrecognized distinction: that it was the lockdown policies imposed by governments that forced the shutdown of the global tourist industry. No such lockdown measures were imposed in response to past diseases, not even past alleged “pandemics.”

The effect of such reporting on public perception is staggering. Consider the following graphic. It presents in a nutshell the cause (reporting on cases—even if only one in seven months!) and effect (poll results showing the vast majority in favor of plexiglass barriers on school buses).

As Robert F. Kennedy, Jr. highlights in the following graphic, the flatlined death count in no way supports increasing lockdown policies, which instead are being driven by the media hysteria over the bogus Casedemic—which is driven by faulty tests, and which ignores the lack of serious symptoms in all but a tiny minority of cases. 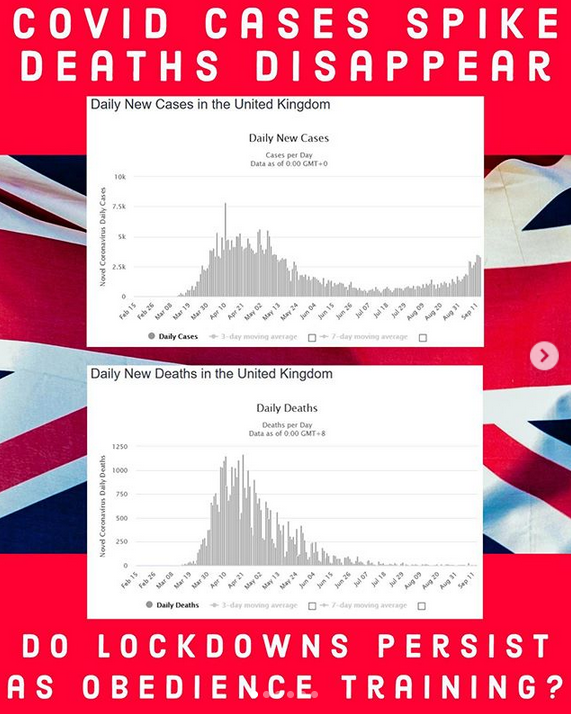 Without further preamble, I bring you…

because of Covid > should be revised to > because of the lockdowns

-To investigate the preplanning for this “lockstep,” see “The Great Reset”

cases (also: infections) > should be revised to > meaningless test results

see: Growing research indicates many COVID-19 cases might not be infectious at all and The Absurdity of Covid “Cases”

the pandemic > should be revised to >the alleged pandemic

– In court cases, an accused in presumed innocent until proven guilty. With major global impacts at stake, the WHO    wields the power to trigger a worldwide emergency with the flick of a word, pandemic. Its reasonings are opaque, or proven wrong (the Imperial College model), yet the word stands for its own reality—in the public mind, a fait accompli. Wouldn’t it be prudent to examine the evidence, as in a court of law, before announcing the verdict at the start of the trial? What, there was never a trial? Oh, just a decree from a judge. No jury, no cross-examination, no transcript, no appeal. “Just do it.”

-See: The Jab – How the WHO Faked a Pandemic to Sell Vaccines

-See: RFK, Jr. testimony in Line in the Sand interview and Dr. Reiner Fuellmisch’s presentation of the legal case against those responsible.

WHO, CDC > should be revised to > corrupt bureaucrats citing “the science” of Big Pharma

-See, again: RFK, Jr. testimony in Line in the Sand interview and Dr. Reiner Fuellmisch’s presentation of the legal case against those responsible. 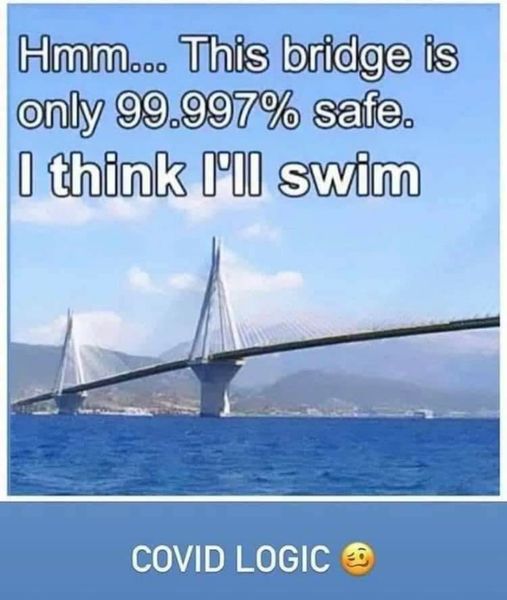