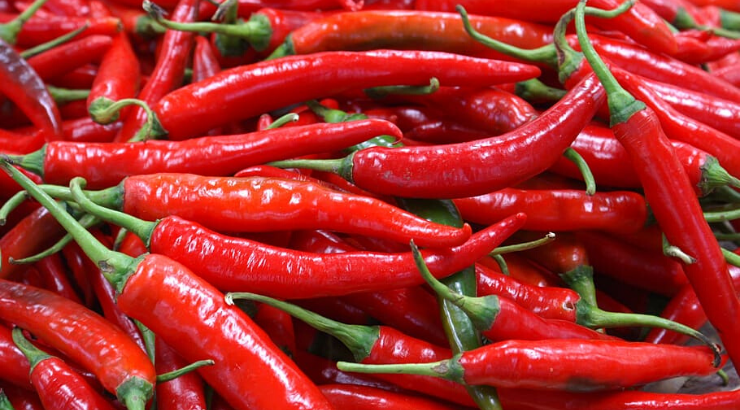 (TMU) — Those of us who regularly enjoy delicious hot bowls of spicy pasta arrabiata or delicious platters of enchiladas drowned in salsa de chile pasilla are in for some good news: chili peppers are not only delicious, but they also have numerous health benefits.

According to new research carried out in Italy, eating chili peppers on a regular basis can significantly cut the risk of death from heart disease and stroke.

The study, which compared the risks of death among 23,000 people, looked at the eating habits of those who ate chili peppers and those who refrained from the fiery fruit. Subjects of the study were citizens of Italy’s Molise region, which stretches from the Apennines Mountains to the Adriatic Sea.

Over eight years, participants health status’ and eating habits were closely monitored. The study, which was published Monday in the Journal of the American College of Cardiology, found that those who indulged in chili peppers at least four times per week had a 40-percent lower risk of death by heart attack than those who refrained.

The risk of stroke was also more than halved.

The study also found that those who regularly ate chili cut their mortality risk by 23 percent for a number of ailments and illnesses.

Marialaura Bonaccio, an epidemiologist at the Mediterranean Neurological Institute (Neuromed) and lead author of the study, explained:

“An interesting fact is that protection from mortality risk was independent of the type of diet people followed.

In other words, someone can follow the healthy Mediterranean diet, someone else can eat less healthily, but for all of them chili pepper has a protective effect.”

The benefit is largely credited to capsaicin, the anti-inflammatory compound responsible for chili peppers’ burning sensation.

Licia Iacoviello, a co-author of the study, noted that there was good reason why Italian food culture exalts chilies. He explained:

“Chili pepper is a fundamental component of our food culture. We see it hanging on Italian balconies, and even depicted in jewels.

Over the centuries, beneficial properties of all kinds have been associated with its consumption, mostly on the basis of anecdotes or traditions, if not magic.

It is important now that research deals with it in a serious way, providing rigor and scientific evidence.”

“And now, as already observed in China and in the United States, we know that the various plants of the capsicum species, although consumed in different ways throughout the world, can exert a protective action towards our health.”

Despite the enthusiastic endorsement of chili peppers as a heart-healthy food by the Italian researchers, a study published in July by the  University of South Australia found that too many spicy foods could lead to dementia.

The 15-year study of 4,582 Chinese adults over 55 showed a decline in cognitive functions among those who indulged in over 50 grams of chili daily.

However, another study presented in April at the American Society for Investigative Pathology on Saturday by researchers from Marshall University in West Virginia also found that the spicy compound in chilies may also slow down the growth of tumors and spread of cancer cells.