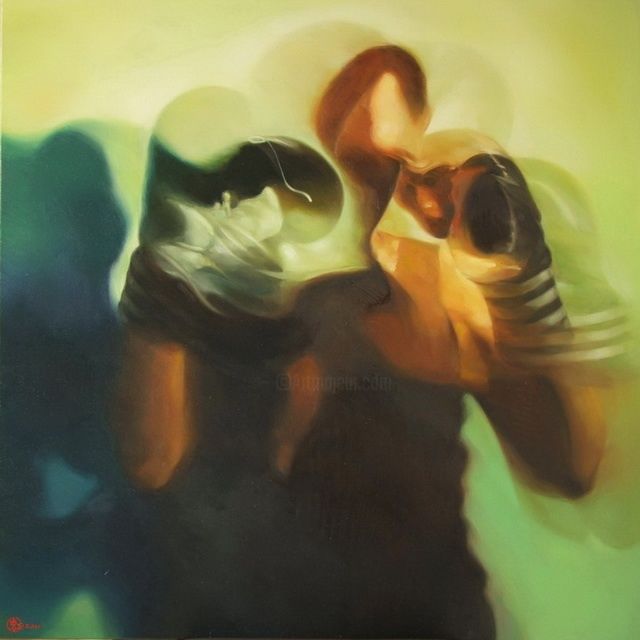 Spiritual training is vital to achieve heightened awareness. It is essential to build character. In the boxing ring of the soul, the individual who can handle the most adversity will be the one with the superior character and the greater capacity for heightened levels of awareness.

Great character is forged in the furnace of great adversity. Pain, hardship, misfortune, these are mere kindling. Nothing burns brighter. Those with great character have the courage to bask in such flames. They realize that the boxing ring is on fire and it’s either burn or be fire. For fire plus fire equals greater fire.

Pressure is the epitome of existential shadowboxing. The boxing ring of the soul is the crucible. Your character will be tested, your heart will be sharpened, your soul will be forged. But first, there are threshold guardians to contend with.

Starting out, your condition is one of cultural conditioning. You must first break through this threshold before you can face your shadow. The demons will continue to howl inside you until you have the courageous wherewithal to face this initial threshold guardian. Ironically, the first demon you must fight is the one convincing you not to fight.

This rebellion is a crossroads where you transform your life into a Hero’s Journey.

It’s where you surrender to the fall down the rabbit hole. It’s taking the red pill after forsaking the blue. It’s embracing the Desert of the Real upon exiting Plato’s Cave. It’s “making room to receive.” What do you receive? Truth. Hard truth. The hard truth that reality as you knew it is fundamentally meaningless and hopeless. But losing all hope is the beginning of meaningful hope.

This hard truth is a dark gift. It’s tempest-testing, honor-honing, humor-sharpening. The reward is deep insight and access to the inner sanctum.

“Anyone who perceives his shadow and light simultaneously sees himself from two sides and thus gets in the middle.” ~Jung

This will be an attack on all fronts. You will be outflanked by darkness. You’ll probably have to fight blind. You will get knocked down—a lot. You will be beaten and bruised, bitten and bloodied, foiled and skinned. Your heart will have been exposed, vulnerable and pinned. Your soul will have been unveiled, conquered and thinned. For you see, the only way to win this fight is to lose it.

This is the deepest darkest depths of the crucible. The place where the purpose of your life is tested and found wanting. You will lose. It could very well destroy you. It could even turn you into an existential invalid. It could leave you broken and forever nihilistic.

Where the forge tests metal, the boxing ring of the soul tests mettle. And it’s all surrounded by black flames, the darkest hottest fire in the universe. Let it burn you. Let it annihilate you. Let it forge you. Smolder in the ashes, then rise up as a stronger more robust version of yourself, as someone prepared to adapt and overcome. This is Zen in the trenches. Be the Phoenix. Rise up into a new way of being human in the world.

“A true teacher knocks down the idol that the student makes of him.” ~Rumi

This fight is vital because it will determine your capacity to continue sharpening yourself into an instrument that can receive next-level frequencies for heightened awareness. It will carve your character into a vessel fit to receive wisdom.

The confidence you gained from fighting the threshold guardian and inner demons could easily lead to overconfidence and being blinded by the light. It could lead to having a master’s complex. That’s why this fight takes place in the Temple of Apollo, where the inscription over the entrance reads: “Certainty brings ruin.”

You do that with the blurring ninja punch of curiosity.

With curiosity in your pugilist arsenal, you can never be defeated by certainty. Curiosity is simply too fast for certainty to keep up. For curiosity has the imagination, the depth, and the otherworldliness that certainty can never touch. Certainty is blind to it. Certainty doesn’t even know that it can’t see it.

And so, armed with the gloves of curiosity, you are unconquerable. You rope-a-dope your own ego. Certainty is left in ruins at your feet. Mastery is humbled. Your holier than thou angels are grounded. Your pride is laid low. Like Ali, you float like a butterfly and sting like a bee. But you are not overconfident. You are simply confident enough; to maintain your connection to the underlying essence and thus your link to the higher frequencies of absolute awareness.

This article (Existential Shadowboxing: Strategies for Building Character) was originally created and published by Self-inflicted Philosophy and is printed here under a Creative Commons license with attribution to Gary Z McGee and self-inflictedphilosophy.com. It may be re-posted freely with proper attribution, author bio, and this statement of copyright.