IMAGINATION IS A SPIRITUAL PATH 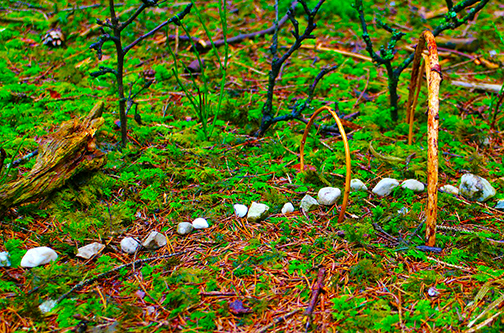 IMAGINATION IS A SPIRITUAL PATH

Living through and by imagination is a path.

But no one defines it for the individual who is moving along it.  No one lays it out.  No one is in charge of “the end result.”

And no one explains exactly what discoveries will be made along the way.

Philosophies, metaphysical and spiritual systems, and religions are all about content.  They fill in “the reality behind the reality.”

They depict places you will arrive, and what you will find when you get there.  They present cosmologies.  They paint pictures.

They tell you what you must do and avoid doing, in order to see what they see.

It’s your substance and content.  It’s your painting.  You’re painting it.

You do the imagining.

Why is this a spiritual path?

Because as you go, answers to questions you have will spontaneously arise.  Answers to the big questions.

This is a side effect of living through and by imagination.

But again, these will be your answers.  They aren’t prepackaged.

In fact, you may find that the answers you’ve previously accepted as final and ironclad turn out not to be your answers at all.

Living through and by imagination means that you create and invent what you most profoundly want to create.  Not just today, or tomorrow, but on and on, without end.

It is a path.  It has no conditions attached to it.  You aren’t obligated to believe in some particular thing in order to embark on it.

The history books and the spiritual books don’t mention this path.  Those books have already decided what paths they prefer, and what the end result should be.

The author of three explosive collections, THE MATRIX REVEALED, EXIT FROM THE MATRIX, and POWER OUTSIDE THE MATRIX, Jon Rappoport was a candidate for a US Congressional seat in the 29th District of California. He maintains a consulting practice for private clients, the purpose of which is the expansion of personal creative power. Nominated for a Pulitzer Prize, he has worked as an investigative reporter for 30 years, writing articles on politics, medicine, and health for CBS Healthwatch, LA Weekly, Spin Magazine, Stern, and other newspapers and magazines in the US and Europe. Jon has delivered lectures and seminars on global politics, health, logic, and creative power to audiences around the world.

Connect with Jon at No More Fake News where you can also sign up for his newsletter.