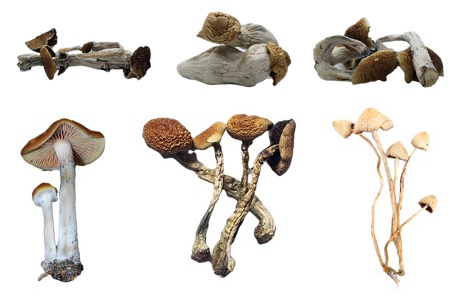 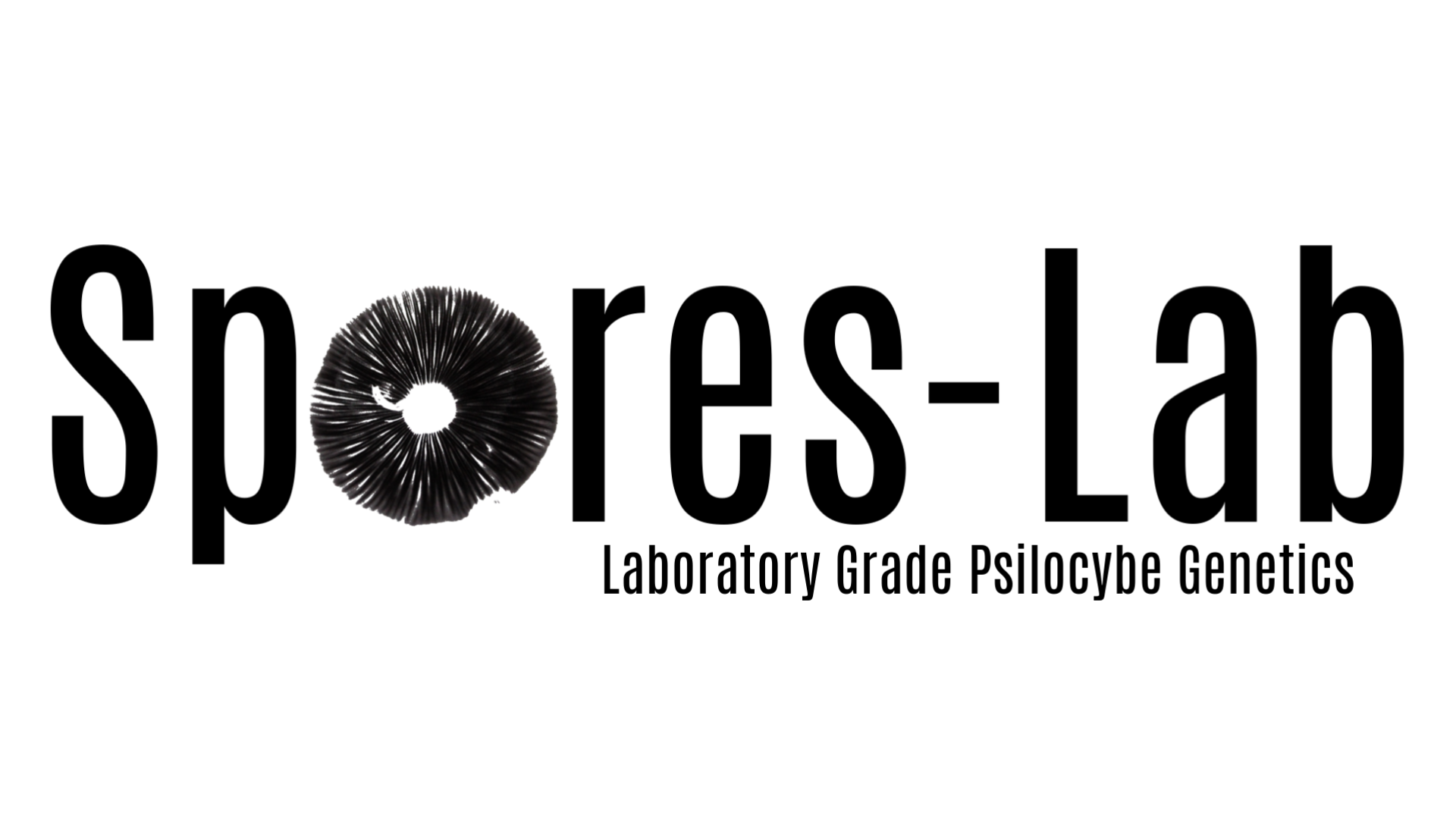 There are over 200 species of Psilocybe mushroom, each possessing visually unique characteristics along with varying levels and ratios of three psychotropic compounds – Psilocybin, Psilocin, and Baeocystin. A few of the most prevalent species are Azurescens, Cyanescens, Semilanceata, and Cubensis (which is the most widely known and easily cultivated). There are also hundreds of “strains” or “subspecies” which have been genetically isolated and classified by both professional mycologists and recreational enthusiasts. While taxonomically these strains are all considered members of their respective species (and most are cubensis), they too can differ drastically in appearance, conditions required for cultivation, and potency.

This introduction to mushroom strains and species may seem contradictory or confusing, however a useful analogy to aid in understanding the difference can be drawn between Cannabis and Psilocybe mushrooms. The separation of cannabis species into Indica, Sativa, and Ruderalis corresponds to the separation of Psilocybe species into Azurescens, Semilanceata, Cubensis, etc. While the separation of cannabis strains like Northern Lights, Purple Kush, and Jack Haze corresponds to mushroom strains like Penis Envy, Golden Teacher, and Huaulta. Unlike Cannabis however, where the “crossing” of genetics is used to create a new strain, mushroom strains often begin as a desirable mutation, such as an albino or an especially large mushroom. These random mutations can be selected and cloned for several generations from the largest, healthiest mushrooms of each life cycle, to create a new strain in a process known as “isolation”.

The effects, duration, and onset of the experience provided by different species AND strains (along with many other variables) can differ quite drastically, however all members of the Genus Psilocybe share a few key identifying factors that can aid in their identification. 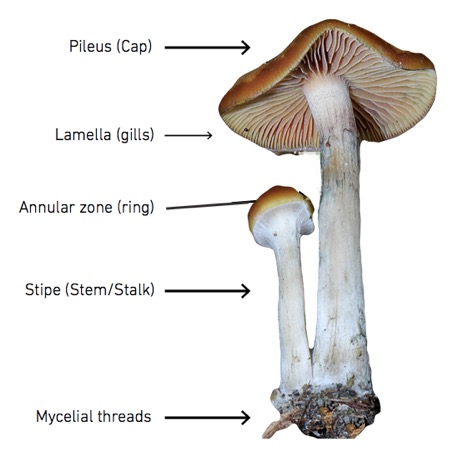 The differing Psilocybe species have a much longer and more intensive taxonomical history than the relatively recent distinctions between strains. The first reliable documented case of Psilocybe intoxication occurred in 1799, when a man picked several Semilanceata from the shores of the Thames river in London, and cooked a meal for his family with them. This surprise-trip spurred the classification of a new species of mushroom, which was placed in the Genus Agaricus, then moved in 1871 to Psilocybe. For the purpose of remaining succinct this article focuses on the 4 species most commonly found in North America.

Semilanceata’s, often referred to as “Liberty Caps” are one of the most widespread, potent, and commonly recognized members of the Psilocybe genus. They are easily recognizable by their conical bell shaped cap which holds its shape throughout the life cycle, dissimilar to most other Psilocybe’s whose caps flatten in maturity. They are also on average smaller than other species, often with a thin, elongated, somewhat fragile-looking stem and a spear shaped cap from which the name “Semilanceata” (meaning “spear-shaped” in latin) is derived. Testing done by mycologists Paul Stamets and Jochen Gartz has placed them as the third most potent Psilocybe species, with an exceptionally high concentration of Psilocybin, low concentration of Psilocin, and moderate levels of Baeocystin. The high concentration of psilocybin often leads to semilanceata mushrooms eliciting a very visual experience that also lasts longer than that of other species, due to the body having to break down this psilocybin into psilocin before the effects are felt.

Cyanenscens are another prolific species that can be found worldwide but is thought to have originated in North America. They are distinctly more mycorrhizal than other species, meaning they require decaying wood in order to grow. This makes them more difficult to cultivate indoors, however has not hindered their spread into every habitable continent. Unlike many other organisms whose habitat’s have been encroached on by humanity, these mushrooms are thought to have a symbiotic relationship with urbanization. They are commonly found on piles of ligneous debris or in mulched garden beds, and sometimes in enormous quantities exceeding 100,000 mushrooms in a single patch. They can be identified by the undulating edges of their caps, and aside from this wavy cap possess visual characteristics quite similar to Cubensis – thick stems and caps that begin rounded or bell shaped and flatten sometimes even becoming convex in maturity. Despite their aesthetic similarity to Cubensis they are significantly more potent, on average containing 30-60% higher concentration of psilocybin, similar concentration of baeocystin, and slightly less psilocin. The experience occasioned by taking Cyanescens is mostly analogous to that of Cubensis, however with notably intensified visuals (a result of higher psilocybin concentration).

Azurescens are the most rare, the most potent, and the most recently discovered Psilocybe species. Similar to many other mushrooms, they were discovered by recreational mycology enthusiasts (a group of boy scouts in the case of Azurescens). This potential to find an entirely new species is undoubtedly one of the attractive properties of mycology (the study of mushrooms) and exists whenever one embarks on a mushroom-hunting adventure. To date over 120,000 species of fungi have been discovered, and this number is constantly growing. Unlike other Psilocybe species, Azurescens are only found in the Pacific Northwest region of North America and carry the highest concentration of psilocybin out of all members of the genus. Due to extremely high psilocybin levels they produce vivid hallucinations, intense amplification of emotions, and sometimes even temporary paralysis.

Generally when someone speaks about “magic mushrooms” or “shrooms” they are referring to Cubensis. The natural geographic range of this species is limited to tropical and sub-tropical regions, however they can be (relatively) easily cultivated indoors – making them the most popular and easily accessible “magic mushrooms”. Many websites even offer ready-to-grow kits (which are legal in many countries as mushroom spores do not contain psilocybin) while other websites go even further abreast of the law to offer dried mushrooms and micro-dose capsules. Cubensis mushrooms often have thick, dense stems and large broad caps, they also grow larger than most other species although this is likely due to generations of genetic isolation. This species provides the classic psychoactive mushroom effects of euphoria, feelings of love and unity, introspection, philosophical ideation, synesthesia, visual augmentation, and a less ego-influenced perspective. 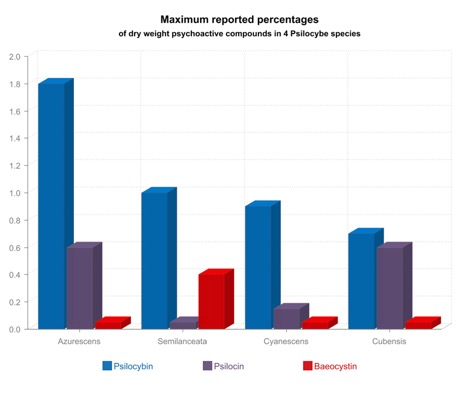 Due to the comparative ease of cultivation (not requiring decomposing wood or dung in order to grow) the vast majority of recognized strains all fall under the umbrella of the Cubensis species. Although the exact number is difficult to determine, and new strains are consistently being created, it is estimated that there are around 150 distinctly identifiable Cubensis strains. In this article it is not possible to cover them all, so we will focus on 3 of the most prominent ones. If you are interested in delving further into the differences between strains, check out Psilopedia.ca which offers the widest catalog of cubensis strains online.

This strain was first classified in the late 1980s and since then the name Golden Teacher has become almost ubiquitous with psilocybin mushrooms. GT mushrooms are medium/large in size and often have a distinct triangular bump in the centre of their golden/caramel coloured caps. It is a moderately potent strain, therefore great for beginners, that offers a subtly more spiritual, introspective undertone to the experience, along with feelings of euphoria and uncontrollable laughter. This makes them well suited for both social recreational use and therapeutic or medicinal application.

Penis Envy Cubensis has an interesting history. It is theorized the strain was isolated from Amazonian Cubensis (another popular strain) by legendary ethnobotanist and psychonaut Terence Mckenna. Since Mckenna’s original isolation many variations of PE have subsequently been created, such as Albino PE and Uncut PE. All of these variations have characteristics which are clearly distinct from other cubensis strains, consisting of substantially (30-50%) higher potency, extremely thick, dense stems and pale underdeveloped caps – making them somewhat resemblant of the organ for which they were named. They are known to generate an experience filled with deep philosophical ideations and intense feelings of euphoria.

This strain was one of the first to be classified, and is thought to be the mushroom referred to by R. Gordon Wasson in the famous Life Magazine article “seeking the magic mushroom” which popularized psilocybin mushrooms to “western” culture. It’s name is obtained from the village of Huaulta De Jimenez in Oaxaca Mexico where Wassons experience took place. Huautla Cubensis are typically medium sized mushrooms of moderate potency that sporate very heavily, often turning the caps purple-black with spores. They are known to reliably elicit spiritually meaningful experiences permeated with intense feelings of love, and unity, along with a sense of connection with nature and the universe as a whole.

The niche of strain categorization and review, inspired by sites such as the cannabis strain aggregator Leafly, is being explored by numerous organizations in the psilocybin mushroom space, with Psilopedia.ca and Psillow.com recognized as two of the most comprehensive and accurate ones.

Psilopedia takes a science focused approach to offering in-depth information on many aspects of psilocybin, like its metabolic process, pharmacodynamics, effects at macro and micro dosage, areas of study, and mushroom identification. They also have aggregated contact information for numerous psychedelic integration practitioners – therapists and psychologists who help integrate the insights realized during psychedelic assisted therapy into one’s life. Additionally they have classified with pictures, detailed characteristics and reviews over 70 cubensis strains, with full report-style overviews of the 4 primary psilocybe species.

Psillow on the other hand is markedly more “culture” focused, offering a consistently updated blog with informational and entertaining articles (like psilocyin’s interaction with cannabis, how long it stays in the body, worldwide legal status, and “travel guides”). They also have useful resources like a “trip report” template, along with a comprehensive catalog of Psilocybe species (more than Psilopedia) however less information on cubensis strains.

The cause of contrasting experiences being elicited by different species and strains is multifaceted and hypothesized be a combined function of two factors. First varied levels and ratios of the 3 psychoactive compounds, and second the set, setting and intention of the user. Differing levels of active compounds can alter the onset, duration, and intensity of the experience, while also playing a role in whether it is felt more in the mind (think hallucination) or body (think synesthesia). Conversely The users’ set, setting and intention play a larger role in determining whether the experience generates spiritual connection, philosophical enlightenment, or therapeutic benefit.

It is also important to note that across species/strains growing conditions, such as the composition of the substrate in which the mushroom mycelium (similar to the roots of a plant) and fruiting bodies are cultivated in, environmental variables, and when in the fruiting period the mushrooms are harvested (either before or after sporation) also has significant effect on potency. Generally the highest potency is achieved with nutrient-rich colonization and fruiting substrates, even ratio of mycelium to substrate at the beginning of fruiting, consistent temperature and humidity, and harvesting just before the “veil” between the stem and cap breaks.

If you have any further questions about the differences between species and strains, questions regarding mushroom cultivation, or wish to buy psilocybin mushrooms online please do not hesitate to contact me through my website!