Ruminating on Ukraine: What Is Freedom? 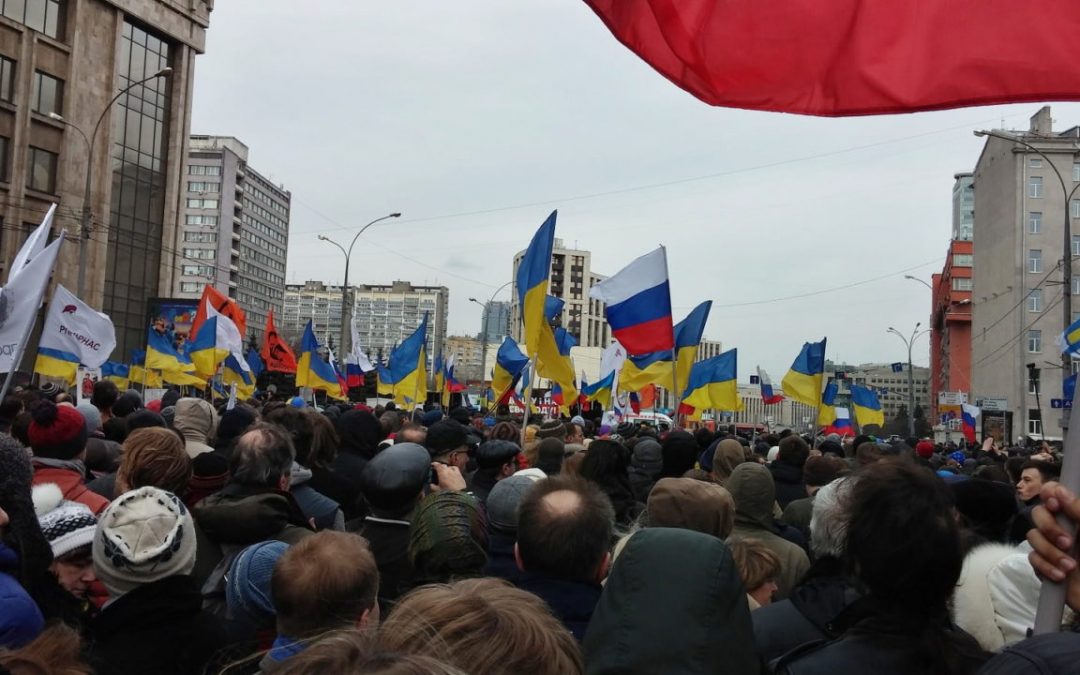 Ruminating on Ukraine: What Is Freedom?

This week, the Russia-Ukraine-NATO tensions reached a crescendo when Russia decided to recognize both Luhansk and Donetsk as independent states. Shortly after that, Putin proceeded to launch what appears to be a full-scale invasion of the Ukraine.

The day the news broke I felt great sadness.

You see, although I’ve never been to either Russia or Ukraine, I have met a great deal of Ukrainians and Russians on my travels and I have a great many friends in that region of the world. Through them, I have been able to learn about both countries’ culture, language, history and incredible natural beauty. It is that personal connection I have to the people that brought me great pain when learning of Russia’s invasion.

What we often forget is that no matter what geopolitical games are being played at the highest levels, it is the innocent civilians on the ground who are most affected by war. People’s lives are disrupted, families are torn apart and, yes, people die. Whether “enemies”, “allies”, civilians or military personnel, people die. That is the nature of war.

As I sat down at my desk, struggling to concentrate on the work in front of me, I began to think of my friends in Ukraine who have endured so much over the last few years. I began to think of the young men, guns and ammunition in hand, ready to risk their lives for their country, ready to die at the request of their leaders. And I began to ponder the true significance of this war and how it relates to the overarching globalist agenda.

This led me to contemplate the nature of freedom and what it means to be free.

Most people would agree that there is another war being waged on virtually all humanity and that is the war on freedom. The problem is that you could ask ten different people to define “freedom” and receive ten different answers.

The yogi would say that freedom is not something to be attained, rather, it is our natural state. Freedom, for the yogi, is the very nature of the Self, something that can never be taken away. The problem is that it’s veiled by ignorance. For the yogi, spiritual practice is a way to remove such ignorance, and shatter the illusion that we are not free.

The monotheist would disagree with the yogi, claiming that freedom comes when evil has been defeated, and that siding with God is the first step to nullifying such evil. This dualistic position sees “evil” as originating from some greater power. Therefore, devotion to God is the only path to complete freedom.

At this point, the Buddhist might decide to chime in, arguing that, in fact, there is no independent self and therefore there is nothing that can attain “freedom”, and no “god” that can grant it. Rather, he might say, we should focus our efforts on removing suffering and aligning our actions and thoughts with the teachings of the Noble Eightfold Path (the Buddha himself taught that we should identify the nutriments that feed our suffering and make an effort to remove them).

The lawyer might define freedom as the absence of legal and political restraints; he may see freedom as a right that enables one to be exempt from the arbitrary exercise of authority in the performance of certain actions.

The philosopher, on the other hand, might see freedom as being synonymous with free will – the ability to make spontaneous choices that are not predetermined or fixed by nature in some way. And he may question whether such a thing even exists at all.

Do you see the problem?

Fighting for freedom is difficult when everyone has a different take on what freedom is and what it means for the individual.

So how should we go about answering the question “What is freedom?”

Most of us want to be free from pain, free from unhappy experiences and negative emotions while still clinging to our ideologies, beliefs and identities. But therein lies a problem, for, “freedom” implies the absence of any defining boundaries, including those created by our own psychological sentiments.

Therefore, we can’t probe the nature of freedom without asking the fundamental question: do we really want to be free? It would appear that being free from something is different to being completely free.

Freedom, by its very definition, requires no ideology, revelation, stimulus or special knowledge. Perhaps we could describe freedom as an inalienable right, bestowed unto each of us by virtue of being born into this world. Thought about in this way, freedom becomes our source of power.

Striving to be free from something is a reaction to an unpleasant situation, such as an authoritarian leader, a debilitating illness, a toxic relationship or a war. Dare I say, this desire is built into us. It’s part of our evolutionary makeup, it’s a survival mechanism. Being free from negative influences brings temporary relief, which is good in itself, but it’s not freedom.

Therefore freedom cannot come from reacting to your environment. That is instinct, that is self-preservation, even desperation. Freedom, it stands to reason, must come from action that is entirely self-initiatory, without deliberation or cerebration.

In a previous essay, I wrote about the conversations between philosopher Jiddu Krishnamurti and quantum theorist David Bohm, two men who thought an awful lot about the concept of freedom. I will lean on their insights once again here to help us probe deeper into the nature of freedom and how it relates to the mind. Here is a short extract from one of their many enlightening conversations (emphasis added)[1]:

K: I have been watching for many years people attempting to become free from certain things. This is the root of it, you understand? This psychological accumulation which becomes psychological knowledge. And so it divides, and all kinds of things happen around it and within it. And yet the mind refuses to let go.

K: Why? Is that because there is safety or security in it?

DB: That is part of it, but I think in some way that knowledge has taken on the significance of the absolute, instead of being relative.

K: I understand all that, but you are not answering my question. I am an ordinary man, I realize all this, and the limited significance of knowledge at different levels, but deeper down inside one, this accumulated knowledge is very destructive.

DB: The knowledge deceives the mind, so that the person is not normally aware that it is destructive. Once this process gets started, the mind is not in a state where it is able to look at it because it is avoiding the question. There is a tremendous defensive mechanism or escape from looking at the whole issue.

DB: Because it seems that something extremely precious might be at stake.

K: One is strangely intelligent, capable or skilled in other directions but here, where the root is of all this trouble, why don’t we comprehend what is happening? What prevents the mind from doing this?

DB: Once importance has been given to knowledge, there is a mechanical process that resists intelligence.

At the beginning of their exchange, Krishnamurti makes the observation that knowledge itself can block us from attaining freedom (he goes so far as to call it “destructive”). Why? Because it distracts, it fragments, it fractures.

Knowledge, which is nothing more than information, can influence our thinking and manipulate our actions. That is the entire premise of psychological warfare.

Bohm’s next statement is supremely important, “I think that knowledge has taken on the significance of the absolute instead of being relative”. Bohm notes that knowledge is given too much stake in modern society, an incredible statement for a physicist to make. But he is right, knowledge is seen as a vehicle for greater and greater achievement. Knowledge fuels technology, progress, and material gain.

Looking deeply at our present world, it’s clear that we do not live in a society that is conducive to freedom. Knowledge, which is binding, is put above freedom. Knowledge is “sold” to us as a way of getting a good job, progressing up the corporate ladder, earning a higher salary and effecting lasting change in the world.

But knowledge does not bring freedom because knowledge can be controlled, twisted, contrived and manipulated.

Krishnamurti, too, was critical of this quest for knowledge and condemned competitive education systems for engendering fear. He also noted that knowledge was necessary for accumulating memory, which forms the basis for thought.

While Krishnamurti recognized the necessity of thought (and therefore knowledge) at certain levels, he was very clear that when thought begins to project itself psychologically as the future or the past, this creates fear which in turn dulls the mind, leading to inaction.

And as we discovered, attaining freedom requires action (even the Yogi would somewhat agree with us on this point, as he would remind us that spiritual practice is necessary for lifting the veil of ignorance).

Krishnamurti then asks Bohm why people cannot see the tremendous destructive potential of knowledge. According to Bohm, the answer is simple: because knowledge deceives.

Bohm goes on to state that within the mind is a strong defensive mechanism, which often leads one to neglect the potentially destructive nature of one’s accumulated beliefs. Bohm’s insights ring true, for, as we have seen, all throughout history people have been willing to sacrifice everything in defence of their chosen ideology. The nature of the mind is such that it always wants to be right.

Perhaps this defensive mechanism is driven by fear – the same fear that causes people to deny unwanted realities (or brand them as “conspiracy theories”).

Krishnamurti then asks why, as human beings, we can be so skilled and capable in so many areas and yet hopelessly clueless when it comes to discerning the destructive potential of our own psychological accumulations.

Bohm’s answer is thought-provoking. He says the importance we give to knowledge initiates a mechanical process that resists intelligence. Mechanical processes are machine-like, devoid of emotion, devoid of deep insight and most importantly, reactionary.

But it’s Bohm’s use of the word “intelligence” here that is most interesting. After all, Bohm always chose his words extremely carefully. He was not one to use a word without being absolutely clear about its meaning.

As it turns out, the origin of the word ‘intelligence’ is the Latin ‘intelligere’ which means ‘to read between’. In other words, intelligence refers to one’s strength of discernment, one’s ability to “read between the lines”.

Is it the cultivation of intelligence that leads to freedom? Perhaps.

If we take that to be so, then it stands to reason that freedom is a state of mind – one free from the boundaries of belief, ideology and fear.

Freedom is the ability to doubt and question everything without any form of dependence, conformity, authority or tradition.

If you enjoy my work, I would really appreciate you sharing this article on social media and sending it to your family and friends.
Email: contact@newbraveworld.org
Twitter: @ANewBraveWorld
About Ryan Matters and NewBraveWorld.org
Copyright © NewBraveWorld.org
“You change the world as a consequence of what you have become.”
– Dr. David Hawkins