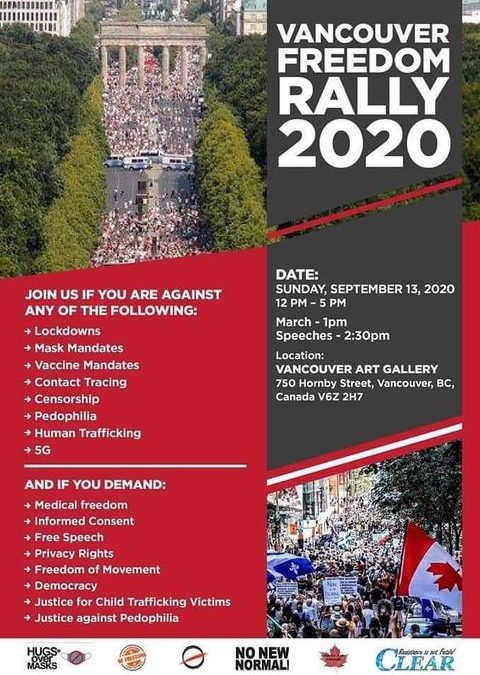 Thank you for being here today. Your presence is important.

Before I begin, I want to ask you all to do something. I want you to reach out to those around you and thank them for being here.

We are in the most important battle of our lives and those around you are your fellow warriors and the ones who will have your back when things get even more difficult in the days ahead.

I am a father, a grandfather, a medical choice activist, and the current President of Vaccine Choice Canada. I am not here to protest. Protesting is a statement that others are more powerful than we are. I don’t believe that to be true.

I’m here to honour, celebrate, and express values as informed consent, bodily sovereignty, medical choice and our Charter of rights and freedoms.

This is a very dangerous time in the history of Canada and the world. I have not seen a threat of this magnitude in my lifetime. Our very democracy, livelihoods, economy, rule of law, right to privacy, freedom and autonomy are all at risk. If things continue as they are, all these rights and freedoms will be gone by Christmas. If you doubt that, look no further than what is happening in Australia.

I came to Vancouver on Friday. It is my first time back in the city since the end of July. I have to say I am deeply shocked at the transformation that has occurred in just six weeks. The number of people wearing masks has increased substantially.

This increase is happening even though the number of individuals hospitalized and purportedly dying from COVID-19 has declined dramatically. Instead of people’s fear diminishing, it is escalating.

I blame our Federal and provincial governments, our public health officers,and mainstream media for this.

What we know now that we didn’t know in March is that the lethality of CV-19 has been massively overstated. If you are under the age of 60 and in good health, the risk of dying from COVID-19 is virtually zero. The evidence is clear that the mortality of this infection is similar to a moderate influenza season, even with artificially inflated mortality numbers.

And so, people’s fear is not based on the actual lethality of COVID-19.

Instead, the level of fear is a result of the intentional and deliberate manipulations by the government, public health and the mainstream media to manufacture fear.

The real epidemic is not a virus. It is unwarranted fear.

A recent poll in the US revealed how disconnected the public’s perception of risk is from the actual risk. The poll showed that the average American is of the opinion that 9% of the US population has died from CV. That equates to 30 Million people, where the actual number is less than 200,000, and we know these numbers have been artificially inflated. Judging by the number of masks that I see, I have no doubt Canadians are similarly distorted in their assessment of the risk.

If Dr. Bonnie Henry, Adrian Dix and John Horgan were being honest they would be reassuring the publicthat the crisis is over, and they need not be so afraid. But they are not making efforts to reassure the public. They are not getting us back to normal. Instead they are repeating the mantra of panic that every fellow human is a source of danger.

We are sacrificing our livelihoods, our democracy, our economy, our communities, our families, and our freedom based upon the number of people purportedly testing positive; a number that is rendered meaningless when you understand the SARS-CoV-2 virus has never been isolated, purified and proven to cause the infection called COVID-19.

I had coffee with my friend Peter yesterday morning. Peter believes our government is doing the best they can with what they know. I’m not that generous. I believe they know that the scientific data doesn’t support this level of fear. As a matter of fact, I know they know that the data doesn’t support this level of fear and justify the violation of our rights and freedoms. I know this because VCC has shared the medical and scientific evidence with them on multiple occasions.

Two weeks ago, we sent a letter to every elected Federal and Provincial official in Canada that contained the verifiable facts. The facts are also clearly outlined in our 191 page Statement of Claim that Rocco Galati filed on our behalf back on July 6thin the Superior Court of Ontario. Our legal action is holding The Prime Minister of Canada, the Premier of Ontario, The Mayor of Toronto, numerous medical officers, and the Canadian Broadcast Corporation accountable in a court of law.

In that Statement of Claim, supported by more than 45 world experts and 245 references, we outlined that the measures being imposed are irresponsible, dangerous, not supported by the scientific and medical evidence, and a violation of our Charter Rights and Freedoms.

So, it’s not because our politicians, medical officers, or mainstream media don’t know the facts. They do. This fraud is intentional. They are maintaining, even stoking the fear, because there is another agenda that is being served by keeping people afraid.

That agenda is to have people begging for a vaccine and other authoritarian measures to “keep us safe”. This is happening already.

If we think that our government, the world health organization, and the mainstream media are committed to health, honesty and accountability, their behaviour doesn’t make sense. By every indicator their measures are failing miserably.

According to their own numbers the case counts are rising out of control. Our economy is in freefall. Our rights and freedoms are violated on a daily basis, our privacy is invaded, our bodily autonomy is dismissed, and our health, most especially our mental health is in serious decline.

Unemployment is up. Bankruptcies are up. Suicides are up, Family violence is up. Drug and alcohol abuse is up. Homelessness is up. Hopelessness is up. There is abundant evidence that their measures are doing more harm than good.

In my 65 years on this planet, I’ve learned not to put too much value on what people saybut rather on what they do. Actions speak louder than words.

What the BC government and our chief medical officer is doing is criminal.

While Bonnie Henry says, “be kind”, her actions indicate that she doesn’t care about truth, freedom, rights, evidence, informed consent or health. Instead what we see is manipulation, deception, distortion, censorship and intimidation. We have effectively been taken hostageby our government and corporations, aided and abetted by the mainstream media.

In Canada we have not experienced the tyranny that other countries have experienced such as communism, Nazism, and totalitarianism. But have no illusions. We are not exempt from this darkness.

The measures imposed are not intended for our health. Forced isolation, forced masking, contract tracing, microchipping, hiding in our homes, disconnected from our families and communities, our elders living and dying alone, our children denied a proper education and socialization, and our right to congregate as a community outlawed. These measures do not promote health.

None of these measures hold up to scrutiny. They are clearly designed for another agenda.

Why is it that the only treatment being promoted is a vaccine? Why are treatments shown to support our immune response such as Hydroxychloroquine, high dose Vit C, Vit D, and zinc, to name a few not encouraged and readily available? If they were really concerned about our health, why is organic food, exercise, and meditation not mandated?

Instead masking is mandated. Masking is not an effective medical intervention. There is no scientific evidence with verified outcomes that support the use of masking to prevent viral transmission.

The mask is a psychological device. Masking is obedience training. It is part of the incremental violation of our rights to ensure acceptance of forced vaccination when the time comes.

I am asked all the time, will there be a COVID vaccine? Yes. The reason is that there is too much financial and political capital invested in a vaccine not to have a return. The next question I get asked is – will the vaccine be safe and effective? My answer is – that won’t matter. It will be mandated anyways.

The FDA in the US has already declared that a COVID vaccine doesn’t have to prevent transmission of the SARS-CoV-2 virus in order to be licensed. If that is so, then why are we pursuing a vaccine when the vaccine won’t prevent transmission and more than 99.9% of people survive this purported infection?

This government doesn’t want us to assemble here today. They don’t want us to have this conversation. If Mike Farnworth had his way, every one of us will be fined or jailed.

I believe we are finally recognizing crimes against humanity on a scale never before acknowledged.

It’s time for us to stand up and defend our freedoms and our country. Taking orders from financially conflicted philanthropists and foreign entities does not serve us well.

I will not stand by and allow this cabal to destroy our Nation, our economy, our democracy, our rights and freedoms and our bodily sovereignty. I will not go along because it is easier.

It’s time for a new normal because the old normal is not good enough. It got us to the insanity we have today.

I believe this is a time of transformation. The old mythology is breaking down, as it should. Some have called this time the Great Unravelling.

Let us create the kind of society we want to live in.

It is said that a human being who lives in mastery has three qualities – love, wisdom and power.

And people are waking up.

50,000 people showed up at a rally in Montreal yesterday.

More than one million attended a rally in Berlin a week ago.

Rocco Galati did an interview with Ezra Levant of Rebel News last week. His interview was watched more than 100,000 times before Facebook took it down.

On September 1st, Rocco publicly launched the Constitutional Rights Centre. He has received more than 700,000 hits in less than two weeks.

We have been contacted by lawyers around the world who are requesting permission to use our Statement of Claim in legal action in their country.

Yes, people are waking up to the real threat we face today, and it is not COVID, but rather our government’s response to COVID.

Vaccine Choice Canada has been fighting to protect and preserve the rights and freedoms of Canadians since 1982.

If you are not familiar with Vaccine Choice Canada, I invite you to visit our website, review the Statement of Claim, become a member, and donate to our legal challenge. Our website is Vaccinechoicecanada.com

I also encourage you to subscribe to Rocco Galati’s newsletter with his Constitutional Rights Centre. The website is constitutionalrightscentre.ca

I thank you for being here today and helping us to reclaim our rights and freedoms and expose the truth.

I leave you with the words of Mahatma Gandhi

Civil disobedience becomes a sacred duty when the state becomes lawless or corrupt.

That time is now.

It’s time we take the BC government to court. It’s time to engage them in an evidence-based discussion in a court of law.

VCC and the next speaker, Tanya Gaw, with Action4Canada have decided it’s time to launch legal action in BC. Will you help us do that? 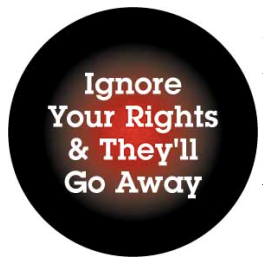 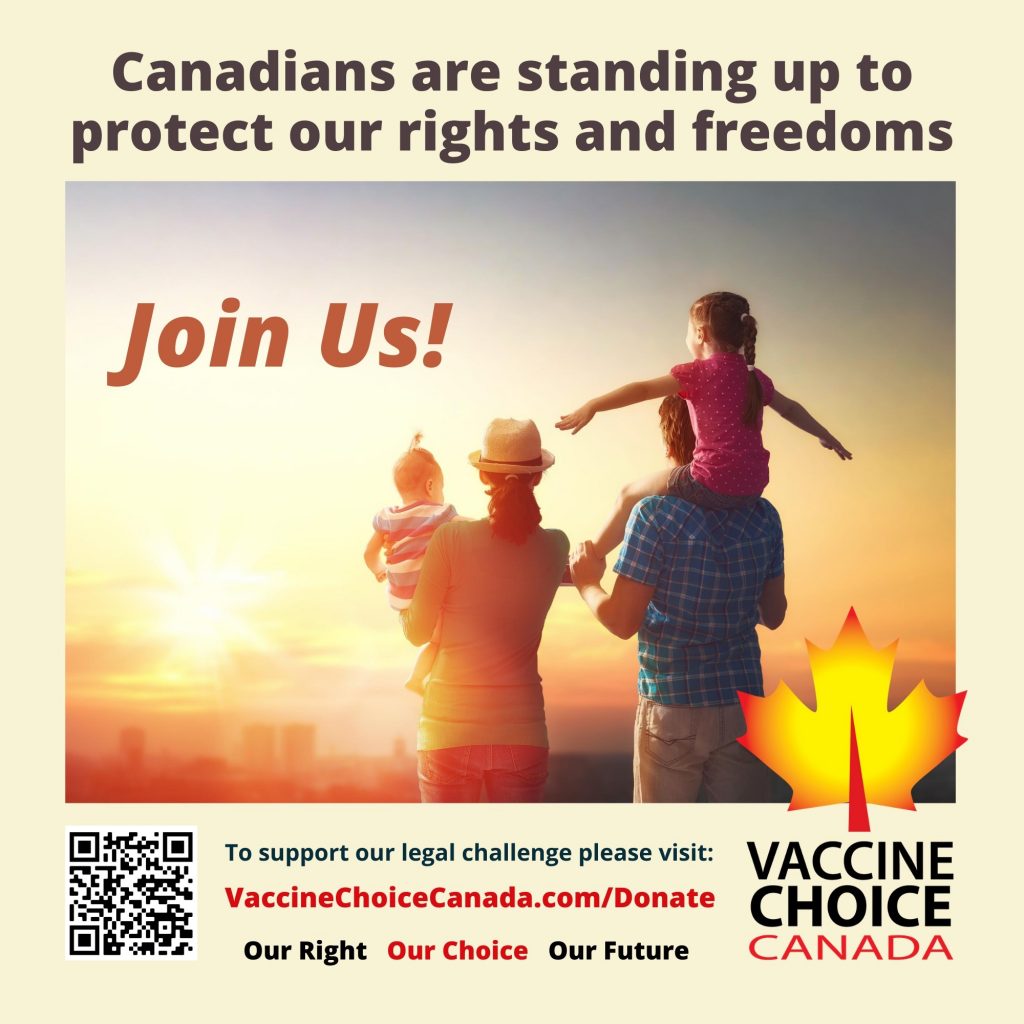