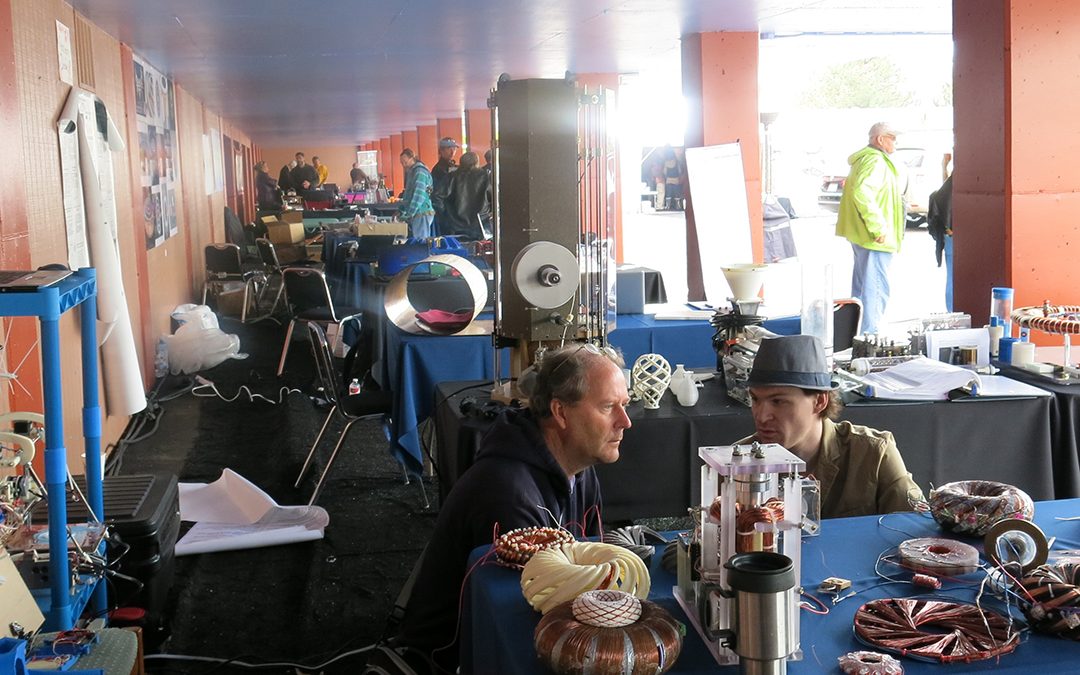 When visiting inventor Bill Muller in Penticton BC decades ago, I heard about Nikola Tesla and it changed my direction in this life.

I borrowed Bill’s books and devoured details about Tesla, the genius who combined scientific and mystical knowledge and invented the electrical systems we enjoy today. Tesla wanted to go further and give us technologies in harmony with nature, and warned about polluting the Earth with harmful technologies.

Tesla pointed instead to a source of clean energy surrounding us. It has been known since ancient times, by names ranging from aether to chi, orgone, the unified field or the Force.

Bill Muller named his own company Pran Technologies because he wondered if a life force energy, present everywhere, flows into every permanent magnet to sustain the strength of its atomic alignment. He demonstrated that magnets do perform work, defying outdated textbooks.

The charismatic electrician attracted dozens, maybe hundreds, of people who called him the Magnet Man of Penticton. Muller’s magnetic motor/generator didn’t live up to his free-energy vision of it during his lifetime, but he sparked the imaginations of many.

His daughter Carmen Miller is dedicated to advancing her father’s legacy. 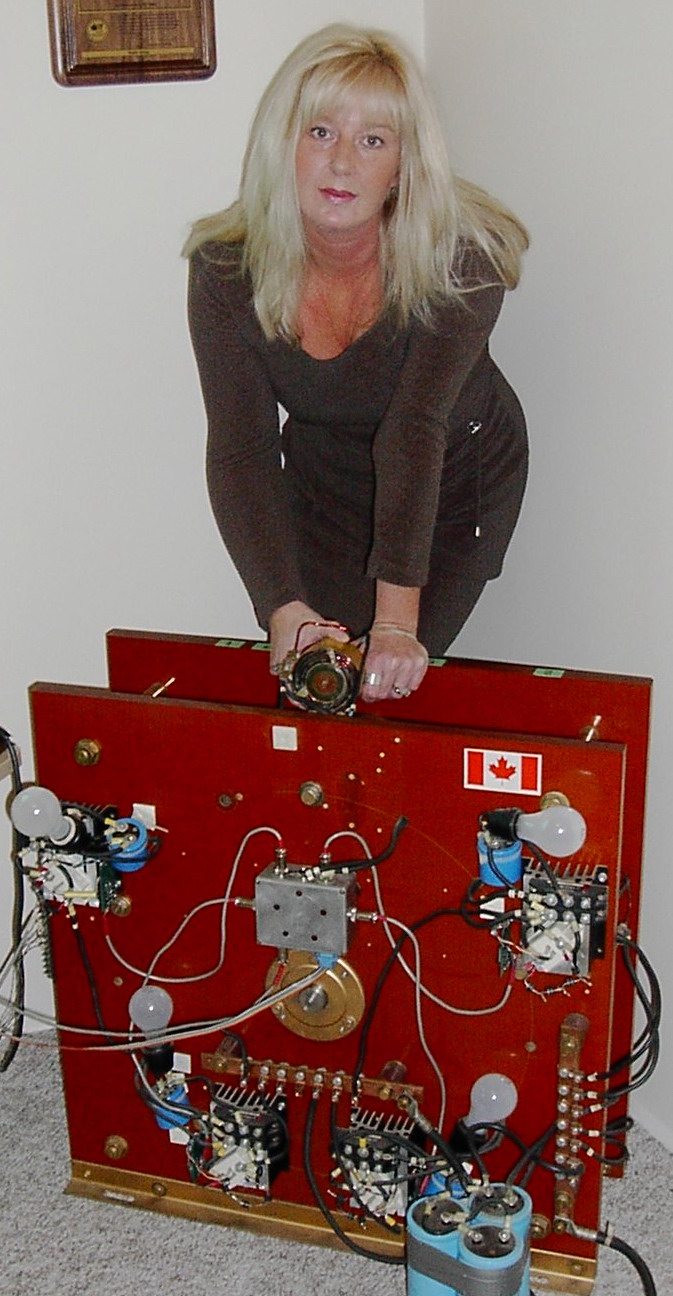 When Carmen was a teenager, engineers and business people from other countries traveled to Penticton to meet with Bill Muller. Yet a surprisingly high percentage of his visitors were local musicians or other types of artists.

What I noticed at the Mullers’ home decades ago is still happening today. Creatives show up to envision radically new ways of solving humankind’s problems.

For example, award-winning European film producer Janja Glogovac was inspired by Nikola Tesla because he was “an artist of science.” Therefore, she researched for ten years and made a documentary, Teslafy Me.

Janja wants to connect artists and scientists. “If those two professions connect in making something good for our planet, I think we can come with quicker and better solutions for the whole world.”

Her spirit of discovery took her where Hollywood has not dared to tread. She went beyond chronicling Tesla’s battle with Thomas Edison who wanted society to continue using inefficient DC (direct current) transmission of electricity. She went beyond merely mentioning Tesla’s dramatic experiments sending electric power 27 miles to illuminate lamps wirelessly in the mountains of Colorado.

Janja Glogovac showed up to see what’s happening today. She went where prototypes of revolutionary breakthroughs are demonstrated and inventors and renegade theorists gather.

Shetraveled with her film crew to northern Idaho—for an annual gathering of leading experimenters and scientists who are learning what Tesla was really up to. I loved seeing the tuned-in film maker interview people whom I chronicle in my books.

There’s ample drama, and potentially world-transforming discoveries happening. An author such as myself felt quite alone in telling those stories. However, that’s changing. I’ll be reviewing Foster and Kimberly Gamble’s second film of their documentaries—Thrive IIwill be released on September 26, 2020.

Hollywood and publishing giants, on the other hand, don’t tell you about the neo-aether movement and frontier scientists.

What was Nikola Tesla doing later in life?

Vested interests steer us away from learning about the Serbian/American inventor’s most potentially empowering discovery.

It’s notsending ordinary electricity wirelessly. Instead, he discovered a safer form of power. He called it Radiant Energy. Some of today’s inventors simply call it cold electricity.

Bankers stopped financing Tesla’s experiments when they realized what he was attempting. In addition to wireless communications, he meant his tower to distribute power. Monopolies wouldn’t be able to put a meter on that.

His troubles began. At one point his laboratory and all his equipment mysteriously burned down.

Tesla’s debts, and America’s fears aroused around World War I, created excuses for his Wardenclyffe tower to be destroyed.

He was considered a foreigner despite his American citizenship. The manufactured fear was that his tower could be used to communicate with “the enemy.”

Why didn’t he rebuild Wardenclyffe after the war?

You might think that the man who invented so much of modern technology would be independently wealthy and could at least hire a team of specialists and continue doing expensive experiments.

However, Tesla had generously signed away much of his royalty rights. He had torn up his lucrative contract with the industrialist George Westinghouse, when Westinghouse was facing financial ruin. And then Tesla poured all his own money into his ambitious projects. 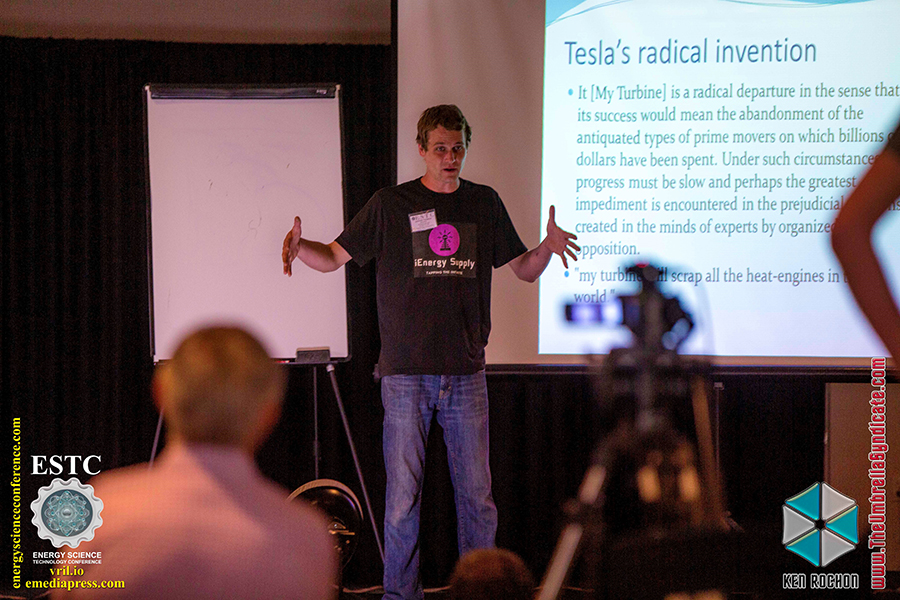 Nikola Tesla was not only blackballed by bankers for the Wardenclyffe caper, he was an outsider to other sectors. Fueling criticism from academics, he proposed scientific developments which were beyond his ability to prove since he no longer had funding. Powerful interests saw to it that he was dismissed by the media as a visionary dreamer.

He could see why. Industrialists were investing in huge energy-related projects—building railroads to haul coal, mining copper to make wires for a vast electrical grid, and drilling for oil. Power monopolies were making fortunes.

As the years passed into the 20thcentury, he saw that his dream of clean power for the people wouldn’t be realized in his time, yet it might finally manifest in the 21stcentury. He expected by now we would be enjoying clean-energy abundance. He wanted to give free energy to the people of Earth.

You could call it Nikola Tesla’s 100-year-out plan.

However, he didn’t quit experimenting. In his later years he worked on his little-known discovery of what he called ‘Radiant Energy.’ ‘Radiant Energy’ is described well technically in American researcher Dr. Peter Lindemann’s book Free Energy Secrets of Cold Electricity.

Briefly, in 1899 Tesla had discovered a mysterious effect which the next generation of experimenters such as the late Edwin Gray, Sr. called cold electricity.

Following Tesla’s lead, Gray shocked the discharge from a high-voltage capacitor into releasing a powerful radiant electrostatic burst. Gray captured the energy spike from his circuitry into a special tube.

Lindemann says the non-shocking cold form of energy that came out of the conversion tube powered Gray’s demonstrations, appliances and motors and recharged his batteries. Gray died without revealing how his circuit produced the mysterious effect.

Such a breakthrough to a potential world-changer needs a team effort—to understand it and learn how to harness it.

How did Tesla discover so much?

Even before he emigrated to America, Nikola Tesla had decided to solve the range limitations of Edison’s system. When Tesla told his European professor about his plan to invent a new electric motor that uses AC, the professor dismissed it as impossible.

How could he create something experts insisted is impossible?

He was born in 1856 in a forested region of the country then called Croatia. Tesla’s sensitivity and illness as a youth forced him to look inward and control his thinking. Those difficulties taught him how to focus.

He also had what are known today as out of body experiences—journeying to new countries and making friends there, but not in his physical body.

While at engineering school, Tesla concentrated so intensely that he was hit with what his doctors called a nervous breakdown. His vision and hearing became painfully sharp. He could see any invention he was thinking about, as if the device were solidly in his hands. Or a detailed hologram that he could walk around.

To restore his health, he often hiked with a friend. One afternoon they strolled through the Budapest city park during a luminous sunset. Tesla spontaneously recited a poem by Goethe:

“The glow retreats, done is the day of toil;

Ah, that no wing can lift me from the soil,

Suddenly he was spellbound by the setting sun and a vision of a vortex whirling in space.

The breakthrough that his professor had deemed impossible came like a lightning flash, an opening of inner vision. That perception beyond ordinary sight revealed an elegantly simple motor, operating.

It was a completely new approach, a rotating magnetic field producing alternating electrical currents, out of phase with each other. He saw a system that would revolutionize electrical technology.

He tried to convey his excitement, “See my motor… Watch me reverse it!”  His friend couldn’t see the vision and must have thought Tesla had lost his mind.

Tesla grabbed a stick and drew a diagram in the dust.

Six years later, he would show a similar diagram to the American Institute of Electrical Engineers and describe his new scientific principle involving a magnetic whirlwind created by out-of-step electrical currents.

Tesla, like independent film makers, authors, scientists and experimenters on the energy frontier, didn’t give up. 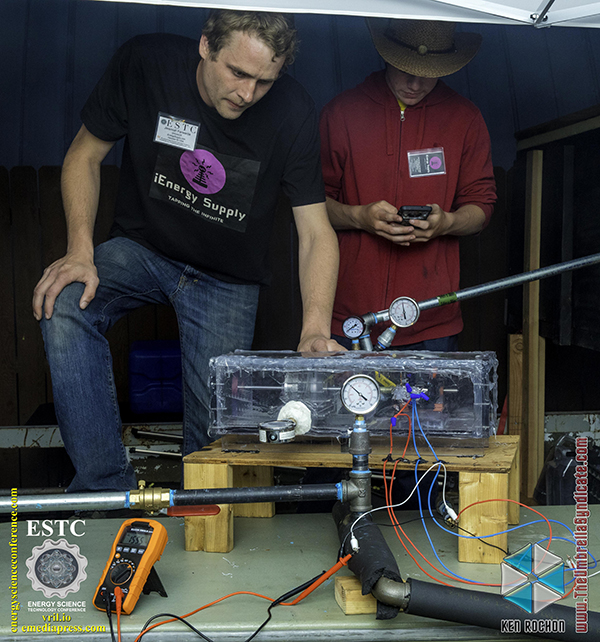 Neither do organizers of conferences such as the Energy Science and Technology Conference (ESTC) (https://energyscienceconference.com/) held annually in July in a humble fraternal lodge in north Idaho—where Janja Glogovac interviewed for Teslafy Me.

This summer we Canadians couldn’t cross borders and attend, nor could Asians or Europeans. Undaunted, organizer Aaron Murakami found a spacious fairgrounds venue near Coeur d’ Alene, Idaho. ESTC 2020 went ahead with a smaller audience.

Invisible opposition hit Murakami after the conference. He had experienced other instances of his websites hacked and flooded with malware, but this attacked his servers more viciously and simultaneously. “It won’t stop me,” he affirms.

The struggles and triumphs of inventors and renegade scientists whom I met at those conferences in the past decade are told in Hidden Energy  (https://hiddenenergy.org).  Part 2 of this article will discuss why Tesla’s version of wireless is different from harmful 4G and 5G systems. Even the “Tesla tower” built in Texas will not result in a Tesla free-energy system.

However, today’s energy revolutionaries arelearning what Tesla meant by “If you want to find the secrets of the universe, think in terms of energy, frequency and vibration.”

Jeane Manning writes from Kelowna, BC. Her books are published in ten countries; the most recent book is Hidden Energy: Tesla-inspired inventors and a Mindful Path to Energy Abundance. 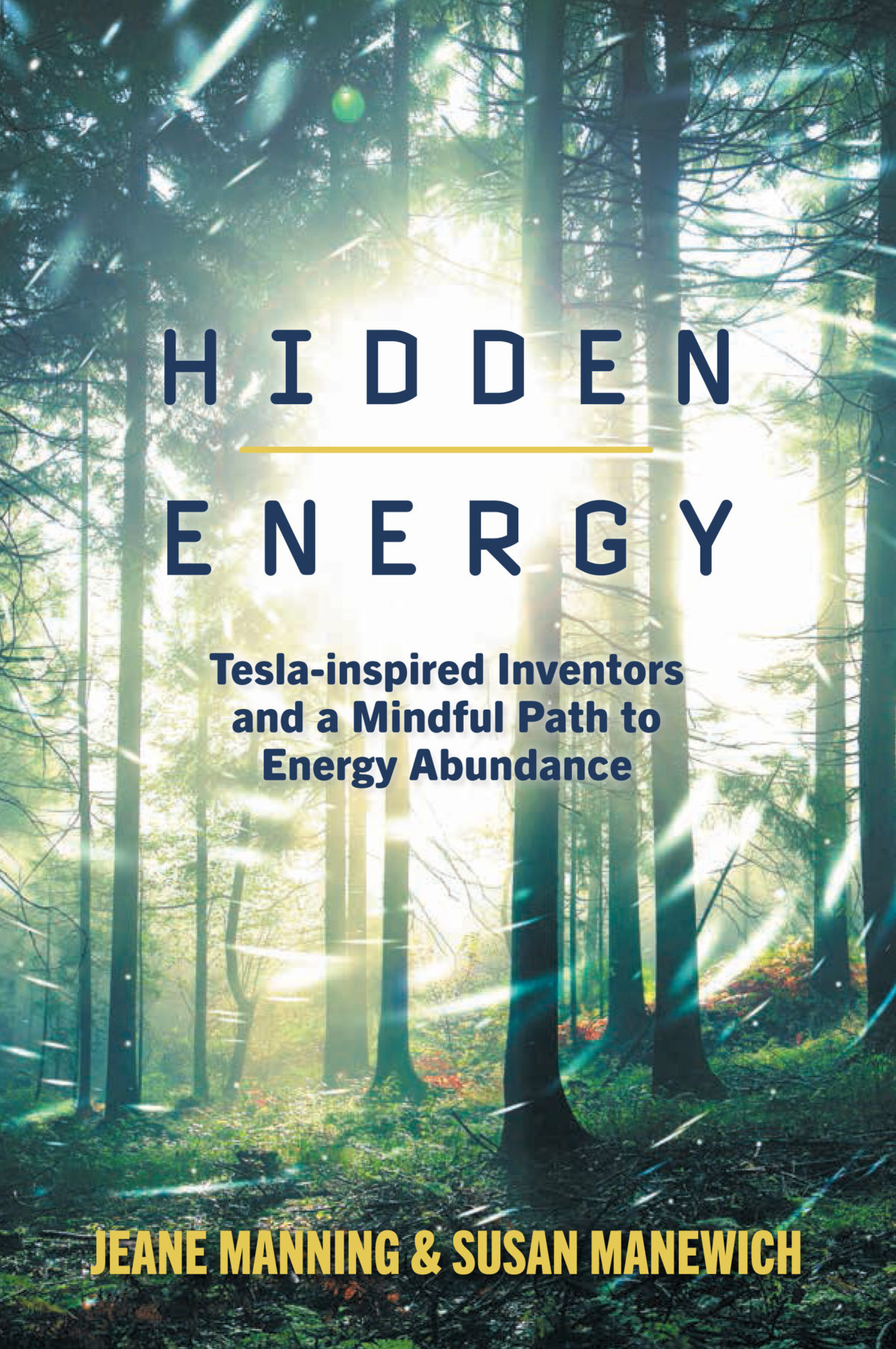