THE POWERFUL ARE GROWING 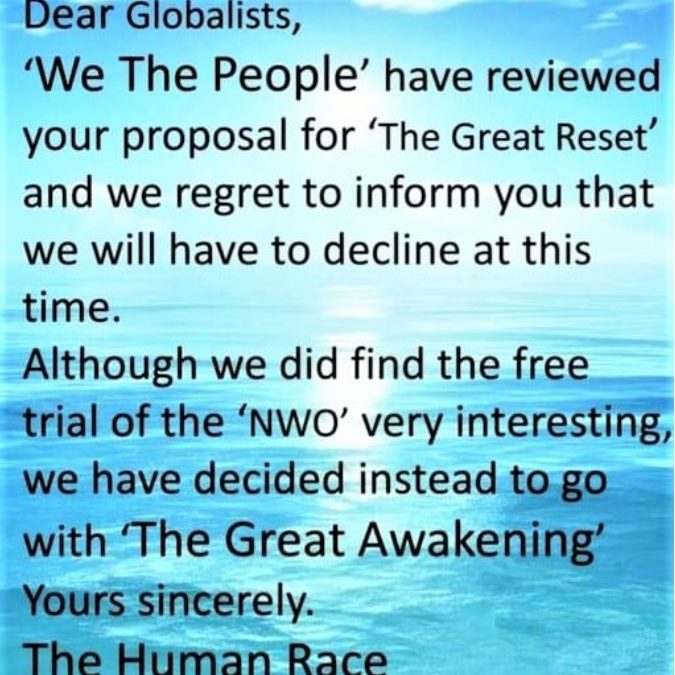 THE POWERFUL ARE GROWING

The Powerful are Growing

Houston we have a slight problem… the brainwashed people are not listening.  They believe the illusion is real.  Can we snap them out of it in time?  It’s hard to watch them complying with the globalist agenda. 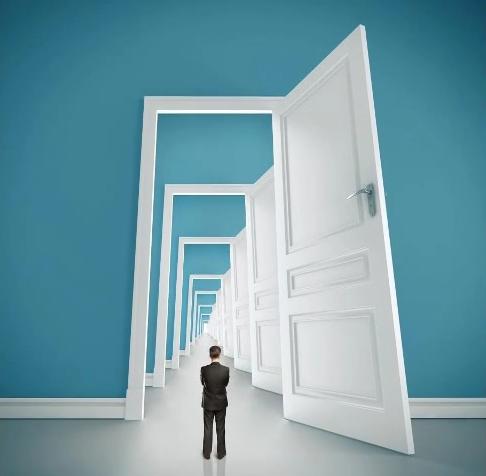 You can’t reason with a brainwashed person.  It’s like trying to have a meaningful conversation with a person who is snockered on alcohol.  Even if the drunken person seems to get what you are saying, they will wake up in the morning with amnesia of that conversation.

What you can do is try to get them to describe what kind of world they want to see.  If you are able to see it with them (whether you agree or not with their vision), you may learn more about how they think and what they base their vision on.  Then you may know better how to talk some sense to this person without causing them to explode and run away.

But if you jam in and say, “Hey! get the f*ck off of fakebook you masked and vaccinated freak, don’t you know you are feeding the psychos with your money, you are building the prison you are in, you’ll be responsible for the fall of humans?” naturally you won’t get very far.  And besides, that plays into the divide-and-conquer aspect of the Game.

There are many problems coming to the world that can make the brainwashed believe all is lost, no reason to fight, just go along to get along.

We need to find ways to get information to them that they can see.  Perhaps the latest information coming forward is too sophisticated for them to understand, who knows?  The green light has been given for news media to report on vaccine deaths and injuries, and they are beginning to do that.  They’re still trying to pin it on the unvaccinated but that doesn’t work when reports are published that say 100% of the patients in ICUs are vaccinated.  Eventually, the correct news will be mainstreamed.  Until then we do not need the brainwashed believing that all is lost.  I’ve talked about the extraordinary power of the belief system within each of us in previous blogs.

The fact that the FDA is stalling on releasing the trials at Pfizer tells us there is no intention to release this information to the public.  People are dying from the injections.  They don’t care what goes on inside the body after injection.

The controllers, however, know exactly what they are doing.

The controllers know that our natural innate immunity will save our species and certain pharmaceuticals will destroy it.  If they compromise enough of the population’s inborn immunity, they can release pathogens that would otherwise be benign to us, and the human race will not survive.

Like the Native American Indians, who were killed off with blankets infected with smallpox (so the story goes), we’ve been kept in the dark about what infectious diseases, mostly called viruses do when treated with lab-grown concoctions.  They mutate into something more lethal.

The controllers know their untested mixtures will stop the body from doing what it is designed to do when it is attacked by a pathogen.  Meanwhile, we’ve been trained to believe government institutions such as the FDA, WHO and CDC really care about our health.  Just as antibiotics become ineffectual, as the amplification of new diseases show up, that’s what we are seeing today with the injections.  Dr. Geert Vanden Bossche and other scholars predict an acutely controversial premise (previously predicted in 1994) that we are seeing come true today.  Some of us know this and some of us don’t.

We need to figure out ways to get mind-blowing information to them in a way that they will see the game for what it is.

Over the years, some people on facebook have gained reputations for posting well-researched material, and no trash.  We sometimes get put in fakebuk jail for 2 weeks, and sometimes we are kicked out for good).  We make fun of facebook’s fact-checkers while providing links to who owns the fact-checkers.  We find ways to side-step the algorithms so otherwise “forbidden” information can be safely posted.

It’s not just me.  Its other, more famous and well-respected researchers like Dark Journalist, Giza Death Star, Suspicious 0bservers, Jay Weidner, and the like (not many better known ones are left on facebook).  We see the potential to get good information further spread while we can.  Facebook is a place where this information can get to millions of others.  Those who read the fakebook metaverse scandal, one by one, they will drop away.  It won’t be overnight.  Nothing is.  Yet, we continue to post as much as possible and in between, I post things related to what the future can be once people get off their knees.

We are fighting a spiritual war and that is not a meaningless statement.  It means the spirits on Earth and not on Earth are in a battle for survival.  Some of us know how the energetics works, and some of us don’t.  I would say that the non-humans know more about it than we do.  When referring to not on Earth, I won’t say heaven or hell or somewhere in between.  These suggest places.  In the spiritual realm, there are no places except the places created by the spirits within that realm.  We do the same thing here on Earth but we mostly do it unconsciously.  That’s why it is possible for us (the human species) to be played so easily.  Most of us have no idea who we are. 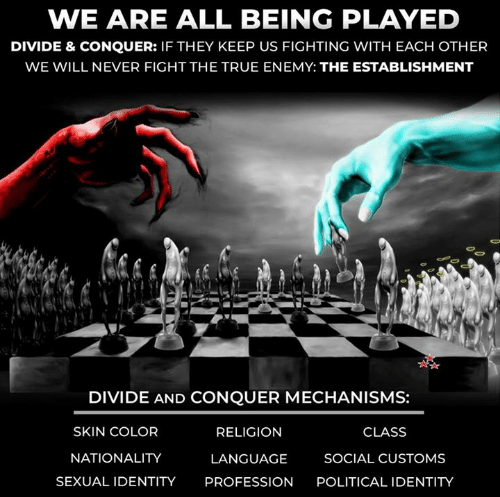 The globalists use mind-control to trick us into battling each other.  This is how the game works.  Some of us see this and some of us don’t.

Listen, I know what it is like to be brainwashed.  Others do too.  Cathy O’Brien is an excellent example of a brainwashed person waking up and seeing the world through completely different eyes once the memory of her true self returned.  Cathy explains how that works here.

All that aside, or because of it, the big picture is not hard to see when words such as these are published: “Our goal is to win ultimate control of the wealth, natural resources, and manpower of the entire world.” ~ Mayer Amschel Rothschild (1744-1812).  My rebuttal to that is here.

Overcoming the mind-control of the masses is our goal.  We don’t do that with a sledgehammer.  We do it with love.  It helps to remember that these people believe what they believe is true.  You may find that most of them do not want to be educated.  They don’t want to know what the truth really is, no matter how many facts you place before them, like a rational person would.  This is a true sign of brainwashing.  They don’t know they are brainwashed.  They would read this and say I am the crazy one who does not perceive this fake world as real.  They don’t see that a third to half of the world population knows we are being played on some level, even if they are not voicing it.

So, one way to approach this might be to ask them to tell you their vision of the world.  You may silently cringe, but try to listen to the end.  Make mental notes.  Find something in common with the person’s vision and talk about the logic of the thing you noticed.  Ask questions as though you really want to know how they came up with their perception.  Did it come from searching for the truth or did it come from elsewhere?  Then you may find contradictions in their vision that the person can reasonably handle.  Or you may have an interesting conversation about how the mind works, who knows?  The point is to get them thinking.  Don’t expect a turn-around while you are present.  Walk away and wish them well.  If there is even one bit of curtain opening, it will happen when the person is alone.  Pray for that.

The brainwashed probably think they know what the Great Reset is all about.  The marketing of this new product paints a picture of Utopia on Earth, doesn’t it?  Do these people like the idea of being owned?  The globalists do. (p.s. remember #cashfriday)

In fact, they like it so much they are willing to kill to keep it that way.  It’s time for the brainwashed to look around and see what’s going on beyond their noses.  Open the window and look outside.

This is not about the so-called virus; it’s not about the shots, the elections, politics, sports games and all those other lies.  This is about humans versus non-humans who have no intention to make life good for humans.  They use the perception of viruses, shots, elections and such for control, nothing more.  If a bunch of us die or become maimed in the process, they count that as peripheral damage or the cost of doing business.

The slight problem we have is figuring out ways to unlock the mind-control within the other half of us.

We will win without them, but they deserve to win with us.  The great awakening cannot be stopped. 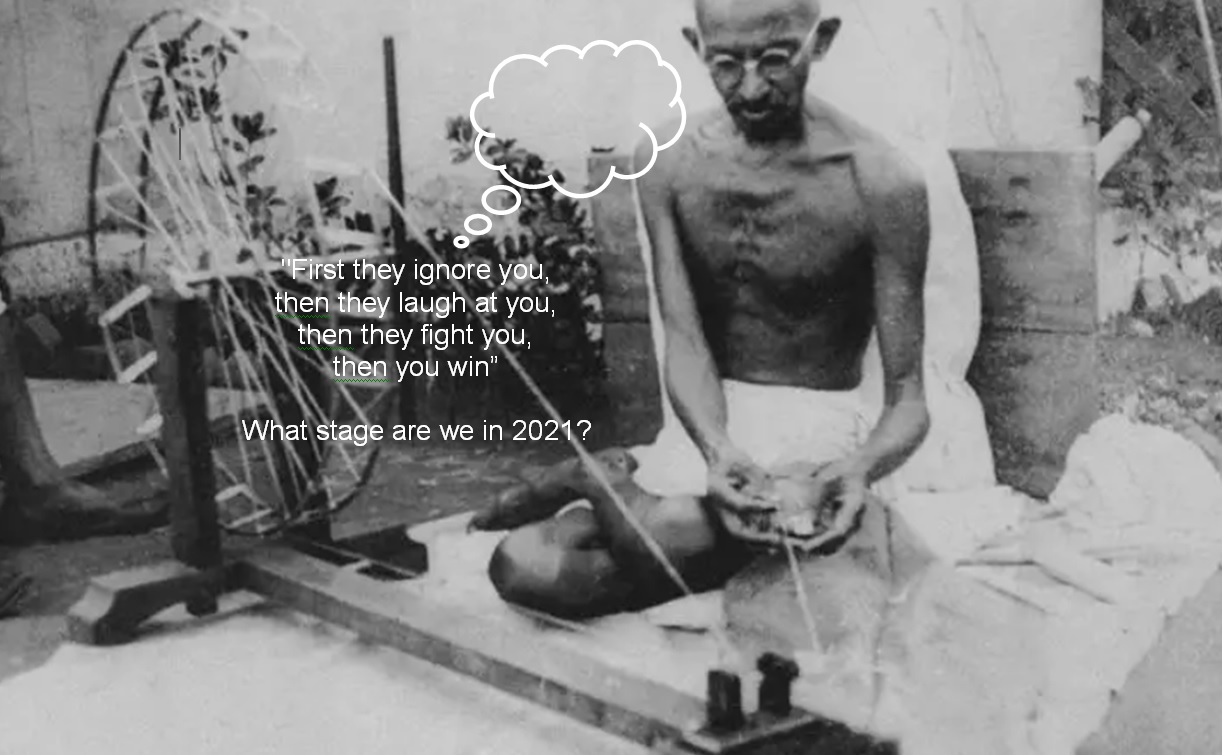 About:   Sherry researches quantum physics related to spiritual development and physical well-being.  She studies archaeology, organic gardening, natural healing, paranormal and other unusual topics.  She co-authored “An Amazing Journey into the Psychotic Mind – Breaking the Spell of the Ivory Tower.”