The Precipice of Power (or Grabbing Freedom by the Short-Hairs) 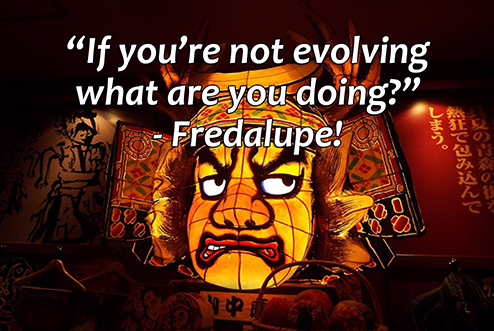 The Precipice of Power

Grabbing Freedom by the Short-Hairs

Of late my life has become entirely whirled by forces beyond easy understanding. What’s presently changed is my perception of actually minding that wild spinning, swirling, spiraling amplification of intent, presently being expressed now in this “vortextual” way. I very much like that new word; and these are truly the times to bring them into our evolutionary dialogue. Times, time, there really is only Now. Only one Now in which to act, only one Now in which to change, to transmogrify, to flower, to take up the challenge before us all, to literally create our own new paradigm. I know it’s strange to imagine we have that kind of power, but it’s true, we do.

Paradigms are a funny thing, although not as funny as the folks embodying them and feeding them with their attention. These intentional and imaginational energies are well worth the observation and study. Persistent, though the illusions of these disposable paradigms may seem at times, this one dominating and consuming most of the Earth and Her Peoples, is a doozy.

“I know that even though you have never suffered hunger,” he went on, “you have food anxiety which is none other than the anxiety of the predator who fears that any moment now its maneuver is going to be uncovered, and its food is going to be denied.

“Through the mind, which after all is their mind, the predators inject into the lives of human beings whatever is convenient for them. The predators ensure in this manner a degree of security to act as a buffer against their fear.” *

And to think it couldn’t continue without our participation, and wouldn’t exist without stealing the power we possess as creations of Creation. That’s you, I mean, me as well. Our folks, and kin, everyone’s got that kind of juice. Or at least they have it for a while.   When the machine’s done with them however…well, we all know how it goes more or less: loss of strength and life force, decrepitude and then an unpleasant end, or so I’ve seen. A rat-racing hamster-wheel all ready for us to gogogo, with our only destination being survival, rushing to nowhere fast. Survival, or the fear of death as I see it, is antithetical to longevity; doesn’t really do a body good all that stress. Quite the killer as we feel and know in our hearts.

I know what most say when facing the simple obvious truth about what humans really are, of where and why. Boxed in and prepackaged, our experience of life presently manifesting in the endless Unknown, is a pale and artificial reflection. What is actually so, what is actually out there and in here waiting for birth, is in fact awareness and a responsibility of a purely sublime nature. 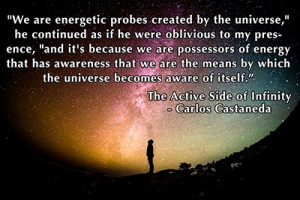 The Dark Sea of Awareness I’ve enjoyed it called. Poetically reversed, it accurately describes what I see lapping at the shores of my mirador (another great word to grow with) when gazing down at the bottom-feeding frenzy occupying mankind’s consciousness.  The French take the watchtower meaning word ‘mirador’ and add a perfectly fitting twist for this situation. Poste d’observation, de surveillance d’un camp de détention. How apropos! How strange again. I only discovered that facet of this gem a moment ago. Makes one go look at the word ‘detention’ again. Never liked the experience in school I can tell you. When I consider the time spent…well, then I really do want to share a little more French with everyone.  Detention: n. f.   État d’une personne privée de sa liberté. Il a été condamné à la détention perpétuelle. SYNONYME emprisonnement.

Nail on the head again.   The state (and State if you ask me) of a person deprived of their liberty, their freedom taken from them. The synonym smacks about right too. Life often feels like a bit of a prison, even comes with a death sentence. That’s if we’re being honest; and we are being honest here. Without honesty as a guide we get nowhere together or apart. Of course honesty is the one thing most folks have trouble with almost to an allergic degree. Could be the food. Ok, in part we know it’s the food. The crazy fluoridated water doesn’t help much either. Neither do the consuming paradigms of a low vibrational predator species, possessing the mind of Man.

“What I’m saying is that what we have against us is not a simple predator. It is very smart and organized. It follows a methodical system to render us useless. Man, the magical being that he is destined to be, is no longer magical. He’s an average piece of meat. There are no more dreams for man but the dreams of an animal who is being raised to become a piece of meat: trite, conventional, imbecilic.” *

At this point one could easily conclude that GMO, as in ‘genetically modified organism’, fairly describes much of what the human family has become after decades and decades of existence have passed through the machines of mad science.

And they certainly didn’t stop there. Can’t forget the skies and what they perpetually spray up above. It’s us they spray really. Just like bugs, worse in actuality, weakening the colony while they work us for our milk and honey. I’ve watched closely at the effect for decades, and worked hard to stay strong and healthy regardless. I feel it all quite deeply and the New Agora often reflects this. No surprise there. No surprise either at how many of the good people who join this agora have something to do with helping with the protection and cultivation of our health and wellbeing.

The geoengineering is as real as the fracking is insane, along with the schools, jobs, TV, pornographic culture of programming and manipulation. Quite the stacked deck. No winners in that game. Even got my sentences fragmenting.

So why play? I ask you.  After all it’s a dead paradigm, folks. Hungry but dead. Crazy how that works. Crazier still how it makes us work away our freedoms, our lives, our stories, our everything, everything we have and are, and everything we can or will be.

And for what?   For transitory empty indulgences and false promises of security that are all just overtures for every kind of trauma imaginable.

Let us be clear: this artificial system needs our lives to continue its unnatural parody of same. Without our participation it has no real energy other than it’s own decaying and distorting nature.

“Just as we rear chickens in chicken coops, gallineros, the predators rear us in human coops, humaneros. Therefore, their food is always available to them.” *

How many days must the sky be filled with a maleficent obscuration occluding the very light that gives us all life? This dark cover stains the very spirit of humanity as so few dare to look up, and even fewer to wake up to that palpable pollution insinuating itself into our pores. How much longer do we have before we finally get what we really deserve? What exactly is the reward for apathy, for doing nothing when so much needs caring for, and so many? 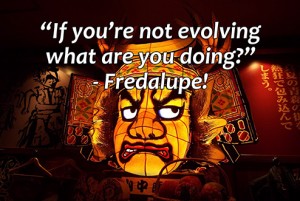 Every month we watch the gravity of selfishness and survival steal away what opportunity might once have existed between us. To do good works together in saving ourselves from irresponsibility’s inevitable conclusion, is a delight and a very real way of honing one’s best self. Every day my cohorts and I struggle through, what passes as our lives, after sacrificing so much that others simply take for granted, to bring you this free communication from our best intentions. We’ve been honored to do so. But frankly, we’re barely making it every month, and I don’t just mean those of us so engaged in this basically selfless project called the New Agora. Oh, sure I put on a happy face (one of the first tricks I learned here) while watching acquaintances, business partners, closest friends and family choose something other than love. What exactly is the other choice? Choose fear? I guess that it’d make a freaky t-shirt, but as a life decision and direction choosing fear is no way to live.
I’ve experienced this all right alongside everyone else, and don’t doubt the veracity of struggle and battle we share in common. Offering what warnings and wisdom we are able to, and to help as best we can has been our saving grace these last many years. We are better for the experience and effort.

I ask you yet again to imagine what we might accomplish together. For nothing less than a true creative victory from us all will save the day.  That’s why we are here. We are the answer to the question. The cure for the dis-ease. Our gifts are endless, and our courage unquenchable. After all, look where we had to go to learn how to really embody that courage.  A line from the book I’ve been working on for so long comes to mind:

You are the Hero & Freedom is the Path.

So sure they’ve got us by the short hairs, the rascals. But if you think about it for a moment you’ll realize where we’ve got them as well.  And we’re not cowards. Don’t believe the hype. That’s their job, cowardice I mean. Lucky us I say.

Without us they die. Without them we are free. No wonder they’re so good at acting frightful, what with being so terribly frightened all the time. No wonder we chose this time of times to bring out our best.   And yet perhaps a little wonder is called for, perhaps even a lot.

The Active Side of Infinity” – Carlos Castaneda, 1998.