The New Now, or not, depending on who you ask

The New Now, or not,

depending on who you ask

Here we are at the very point of choice, facing our square centimetre of chance, a chance of a chance, so to speak, so powerful in possibility, that to grasp it, to truly grasp it is to literally grasp opportunity itself by the forelock, and thereby dare riding it through such fields of potential that at each turn different worlds await: all encompassing, assembled by awareness, lead by attention, inspired by beauty, defined by creativity, guided by humility, honed by impeccability, energized by mystery, freed from the limits of self importance, the prison of self reflection, and enslavement by the predatory self presently possessing Humanity. How fabulous!

Perhaps this is the best of times, to wipe that drool from the corners of our consciousness, to sweep away the dust and dreck of neglect and entropy accumulated during the abrogation of our responsibilities as participant members, and in fact creators, of our own realities.

Ask yourself, if you dare, whose life you are living, whose dream you are dreaming, whose horror are you feeding?

As children we suspect that all is not well, nor is that world, so confidently and unquestioningly presented to us by those that parent us through those tender vulnerable years, a thing of their invention, nor is it a creation of their love, quite the contrary! Their love is used as a lure, bait, it is the cheese in the trap! This box we are offered, one made of belief, one in which we might hide, is merely another cage made of fear and folly alongside all those others that line the human coop of awareness in filth and despair. And so we are beaten and eaten to within an inch of dissolution, left barely enough of what we are to perceive only the meanest of our selves, and to generate the emotive energies upon which our masters greedily sup. Most in the madness of their hubris cannot even conceive of such a thing, regardless of the endless proof shrouding their existence and ours, or the obviousness of the homicidal selfishness of their ‘leaders’. And yet we suffer from the disease passed along to all by this cancerous cult celebrating it’s own destruction with a seemingly endless feast of stupidity. And all for what? All this drama to inspire in us a rage against our captors? Rage? We have enough evidence before us to see the value of uncontrollable anger and its terrible cost to one and all. With rage horror is still fed. With Love horror is soon fled.

Easily said, and yet after a lifetime devoted to manifesting the true strength of Love while incarnated in a dimension thrashing about in a nightmare from which it desperately cries to awaken, I am still here, loving. Where else must love go but where most needed? Where is love most needed then where it has yet to be imagined in full splendour and unassailable hilarity?

Play their game and lose. Play your own and win.

Create, creators. We are the art of our own imaginations. Give birth to your Self. Go your own way. Create your own path. Accept the challenge of this realm of limitation and opposition, and kick it in the ass with innovation and invention, the kind that puts the lie to that which says no to our greatness. Defy all that cannot free you. Laugh in the face of your own fear. Free yourself from that which you aren’t and then turn around and thank it for the opportunity. Author your own story. This is your Show. Shine! Dance! Laugh and sing!

Those dust covered weirdos with their testaments and freaky bullshit called religion, be it statism or silly pope-ry, heck, any and all that claim preeminence or demands worship, offering monocular and utterly insane versions of Source, they hate demonstrations of life, of joy, of naturalness, of freedom. And doesn’t that tell a tale or two? They are all so obviously not in any way anywhere near the truth it’s astounding. And so tacky! Sure they’ve mostly been mutilated into being able to swallow those evil memes, and suffering is no fun, but surely by now we can all know them by their deeds?

If someone tells you something, something you cannot in any way verify for yourself, of what use to you on your awesome journey? And if that someone also insists or demands that it’s their way or the highway: let’s be on our way, it’s the high road for us ,thank you very much. Jesus was not a christian, nor Buddha a buddhist. Both seemed to be saying something quite different, something more along the lines of : evolve already! So maybe if we stop repeating the stupidity that our forefathers and mothers were fooled into believing and passing along we might actually get somewhere together.

So, enough already. We can learn from our past mistakes. How else really? We can do better, never doubt it.

So sure it’s now or never, but then isn’t it always?

The Wisdom of Sitting Bull’s Grandson

In 1969, my Grandfather, Frank White Buffalo Man (grandson of Sitting Bull), shared with me a wonderful spiritual insight and understanding that relates, among other things, of how we must learn to respect, honour, love, support, and understand each other as different nations, tribes, communities, peoples, religions, and cultures of the human family and the spiritual qualities needed to be victorious in manifesting freedom and human rights.   He said, “You know grandson, the Great Spirit has given all people wisdom. To every living thing, he has given something special. Some people receive their knowledge and understanding through books. In your life grandson, you too must read and study books, but remember to take with you on your journey only those things that bring more unity within yourself and others, that bring goodness and understanding and help us to serve one another in better ways.”

“The Great Spirit,” he continued, “also gave our Indigenous peoples and all other peoples who live close to Mother Earth, both wisdom and knowledge through dreams, visions, fasting, and prayer, and the ability to see the lessons the Creator has put in every part of creation. Look at those trees standing over there; the alder does not tell the pine tree to move over, the pine does not tell the fir tree to move over, each tree stands together in unity, their mouths pressed toward the same Mother Earth, refreshed by the same breeze, warmed by the same sun, with their arms upraised in prayer and thanksgiving, protecting one another. If we are to have peace and true freedom in the world,” he said, “we too must learn to live like those trees. Look, grandson, at the beautiful teachings the Creator has put in the little stream. Feel the water and see how gently and lovingly it touches your hands. It travels through deserts, mountains, and many places, but it never turns its back on anyone or anything. Even though it gives life to all living things, it is very humble, for it always seeks the very lowest spot. But it has great faith, power, and patience for even if a mountain stands in it’s path, it keeps moving and moving until finally that mountain is washed into the sea and is no more. These are spiritual gifts that the Creator has given each one of us and if we are to be happy within ourselves and with one another, and find true freedom, we too must develop these sacred gifts,” he concluded. 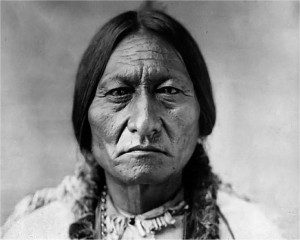