Upon the Anvil of my Heart 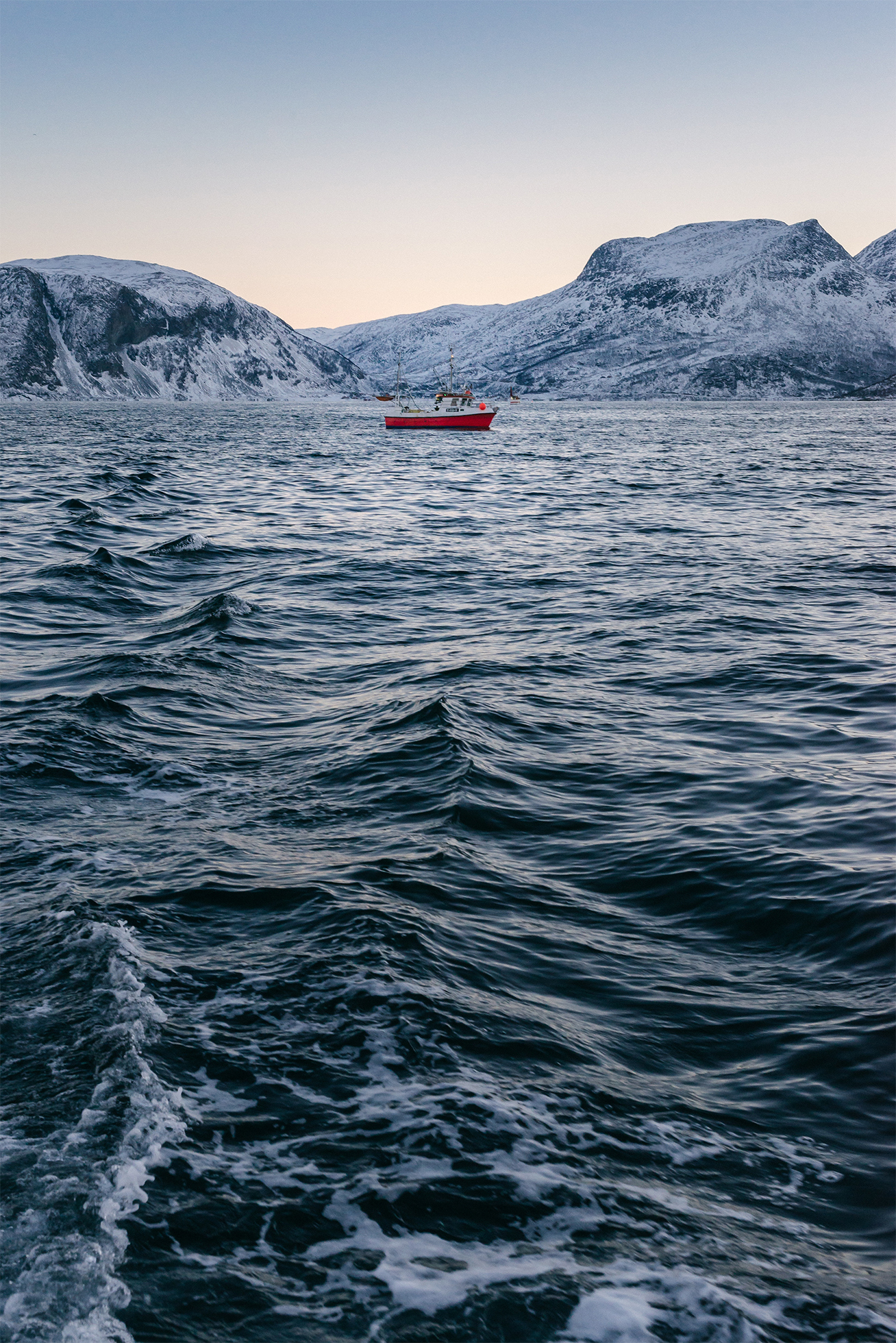 With each thunderous strike that cracks me open, the hammering out of torturously bent and twisted parts, ever accompanied by a pitiless beating, as remorseless and endless as the waves of the sea itself, I cannot help but ask: what is being forged here from the raw materials of my experience, my feelings, my life, in this furnace called existence. Creation and destruction and creation again. Am I being refined? Remade? Reshaped into what? By whom? And for what? Amidst the smoke and terrible heat I must ask, what is being born, and borne again? An agony of birth, it has been and is still. Perhaps that would have made a better title, or epitaph for that which I am presently leaving behind in my wake, perhaps not. 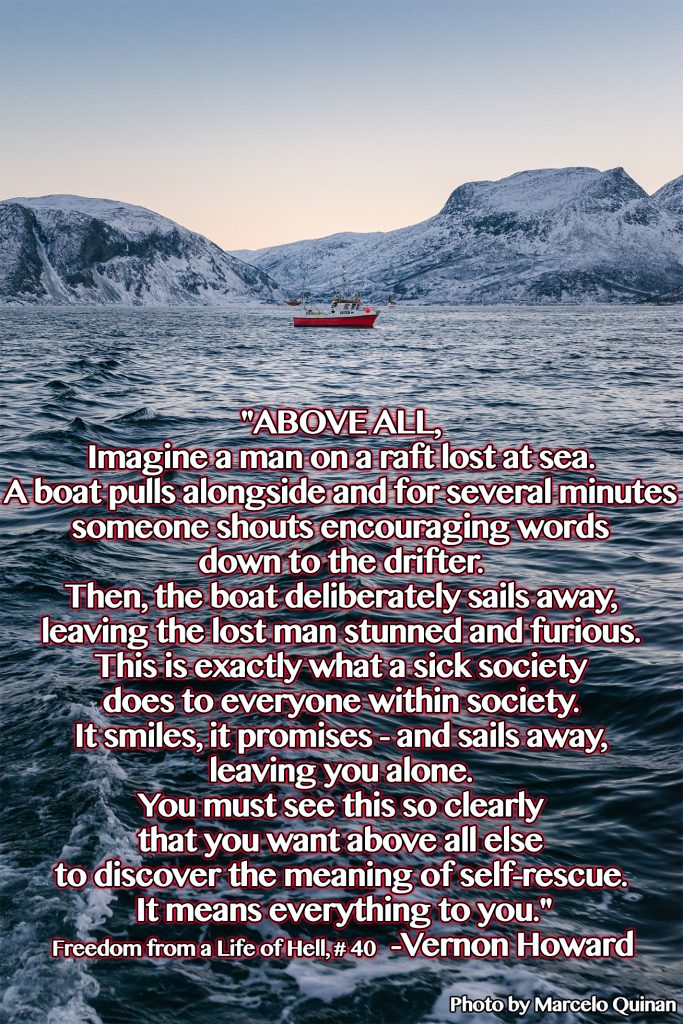 Long ago, although by no means was it the first strike, I met the savage truth of which Vernon Howard speaks, quoted here in the midst of my piece. For I was that man, though a child still at the time, lost at sea, barely able to stay afloat, my raft now only wreckage, my spirit cut to the quick by the ignominy of those shouting out at me as they maddeningly sailed away on their ship of selfish sickness. Watching them in their abandonment a cold horror swept through me as the fathomless depth of final surrender pulled achingly at my root; yet too did a fire begin to rage at my core, as both do still to this day. And so having little choice, my life very quickly became about that very discovery of the meaning of self-rescue. It is no accident that my life’s works reflects this ruthlessly sobering truth.

Stroke by stroke I swam, stroke-by-stroke the hammer falls. The mocking presence of that ship of empty promise would at times get the better of me as it stayed on the periphery of my perceptions, and I would flounder, half drowning in anger, while hungry creatures of the dark deep, attracted by the scent of my fears would come to sup upon my weakness, at times only nibbling, at other times great big bites would they take from me. Out of deathly necessity I tempered my humors as best I could, and, though I raged still, it came to me that guiding myself towards that ever distant ship was a folly I could no longer afford, better to strike out in another direction entirely. I would make my strength this way. I had and have no desire to go where they were and are yet headed. I swore to never follow ignorance or evil, though at times I’ve faltered not recognizing one or the other through the gloom that surrounded me, of the gloom that at times entered me.

Time flowed, carrying me further along on my journey, offering me the occasion to study the strange and distorted creatures occupying the human ship that haunted me still, as it would sail by attempting to pirate my energies, working to board my sovereignty, to capsize my serenity, to sink my every effort towards my own freedom. Their anguished efforts became less and less effective as I grew stronger in my discipline and wiser to their ways and hollow words. To my eye they seemed possessed, lost to themselves, become phantoms enslaved by a predatorial darkness, chained to the deck of their false theatre, lost in an endless folly, all the while feeding their very captors with what little substance remained to them. The more I grew aware of the true captains of this distorted vessel so too did they of my perceptions of them, so too did their efforts to destroy me utterly.

“We’re all going to die, all of us; what a circus! That alone should make us love each other, but it doesn’t. We are terrorized and flattened by trivialities. We are eaten up by nothing.” Charles Bukowski

Perhaps I am being uncharitable here, but the monstrous truth of it stands to this day.   It has been one of my life’s harshest teachers, and one that has kept me on course to developing my own unique humanity.

The taunting, mocking familiarity of that ghost ship was a gentle memory in comparison to this evil galleon of despair that presently hunted me. My growth in awareness revealed their appetite for exactly that. Crewed by incarnations of fear, they would revel in catching me upon wicked hooks baited with torn shreds of still living humanity, sweetened with the ichor of its lost passengers, for hearts call to hearts, and their suffering is a terrible thing to feel.   And so chased, I sailed on, through the pain of their barbed points, past the tearing release from harpoons fashioned of human sorrow, illogic and cruelty. Ever tortured by the cries I hear to this day of love skewered on a predator’s hook, I sailed on through my fears. Yet the beating continued. 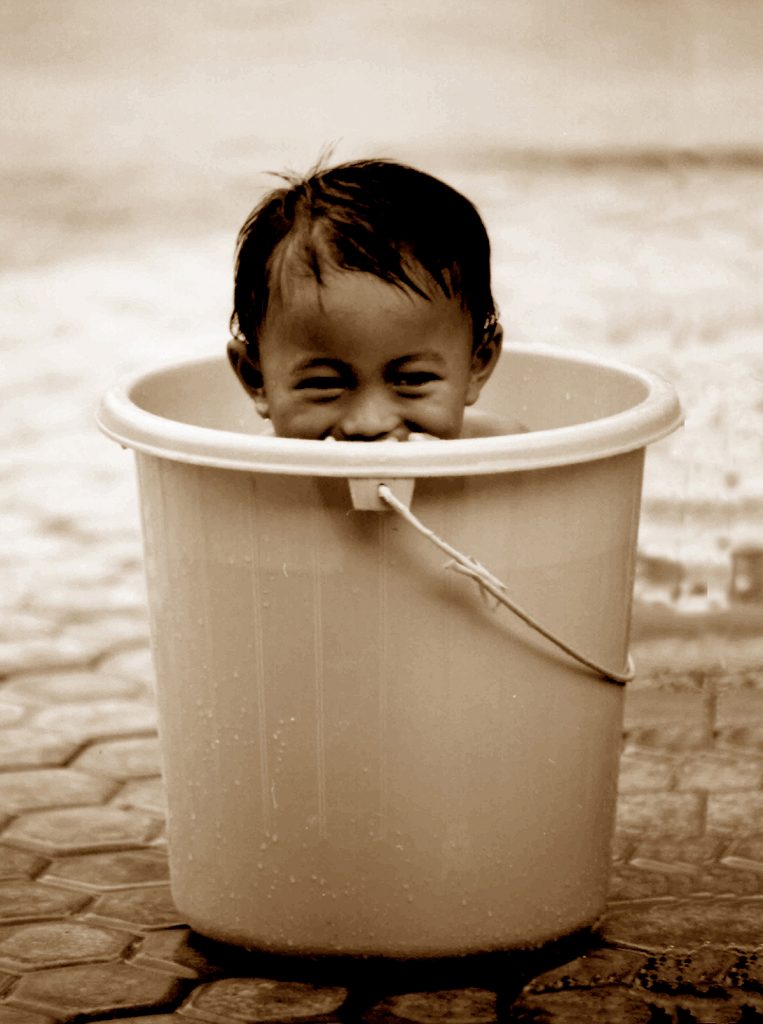 Long I wondered and worked at comprehending the mad spectacle that would visit me in my solitude, in my efforts to reach a shore. Sometimes, in my loneliness, I would even welcome the company of that terrible ship. Sometimes, I would even meet another lost at sea, and for a moment the heavens would open and sunlight would come and shine upon us.   Learning that clinging to one another would sink us both was a painful but necessary lesson, better to encourage by example, to offer a moment’s respite, a mutual acknowledgement of one another’s journey, along with the tangible realization that though alone we are alone together.

Eventually through the accumulation of the flotsam and jetsam of experience and metaphor I built something more than a raft, instead a small ship made of my own awareness and imagination, solitude and hard fought self-knowledge. This offered the rare opportunity to offer the same to others, if only for a moment, for they too were on their own journey, and eventually their own ship, going their own way.

Islands of possibility, of purchase came by, rarely giving more than a short respite and small provisions. Their names differ for each visitor that stops by though some are famed for the success of their offered intellectual ecologies, philosophies, systems and schools of thought and belief. None suited me for more than a moment’s time. And though momentarily refreshed I found neither home nor haven in another’s land. And always the predator shadowed my journey.

Storms came often while sailing through the dark sea of awareness; tempests that seemed to take pleasure in shipwrecking me and my vaunted certainties, dashing to pieces my illusory sense of security upon fortune’s pitiless shores. Thunderous power seethed through the heavens mirroring my rage unto exhaustion. ‘Where was justice?’ I demanded, raining tears of ultimate frustration.   ‘Why was all this so?’ I begged.   ‘Where was peace?’ I wept. ‘Where was freedom?’

Out of my darkness the Galleon always returned, hungrily rowing towards me, to the beat of my suffering heart. 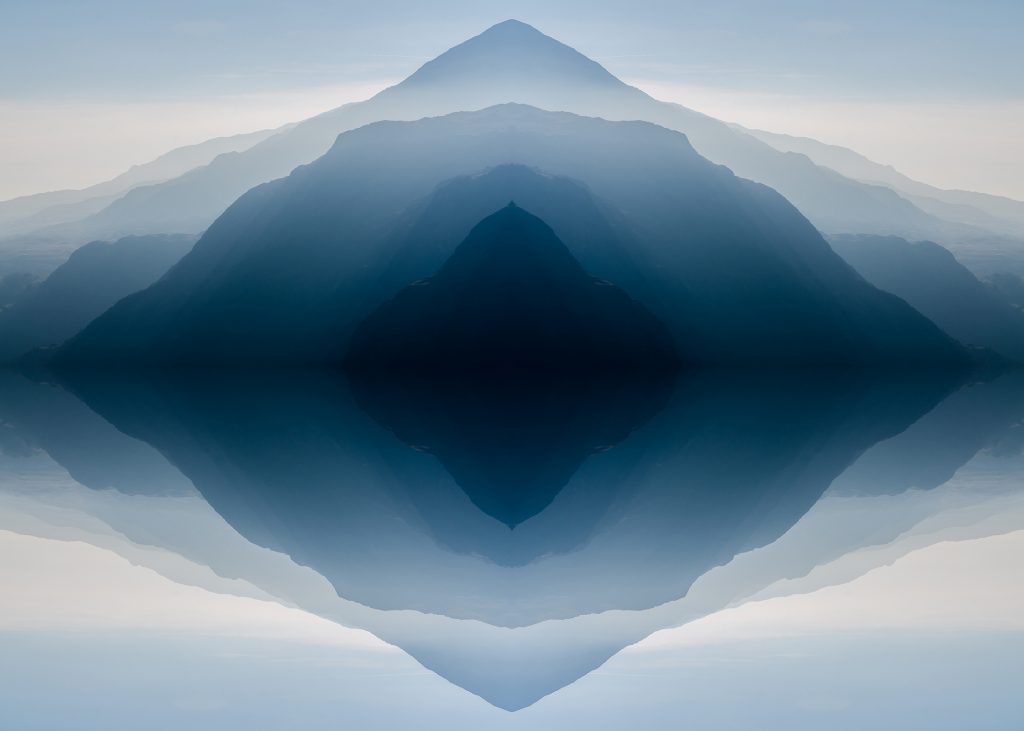 Then lightning struck me. Power spoke in a blinding flash that granted me a mirador upon my existence, a vista that extended both inwardly and outwardly, a complete seeing of my life, recapitulated in an unbearable honesty that destroyed me utterly, as embodying the truth of life created me anew.

Power answered me thusly: I was justice and injustice both. This was all so – to help me grow. Peace was everywhere and nowhere. Here was freedom.   Make of this what you will. Thou Art God.

Awakening from my death, I stumbled upon newborn legs as, making myself with every step, awe filled me to overflowing with the perfection of design, of presence I saw everywhere my eyes walked.   A’tremble with truths, made fragile with shiningly sharp realizations, I came again to myself, to the Earth of my being, so long, so long lost at Sea.

The music of industry brought me to where others had built their lives, cultivating their dreams of family and community. And though they laboured under a strange dark sun that took light rather than giving it, I recognized the strength they exemplified in the songs and laughter they expressed regardless of the yoke that curtailed their freedoms, in the love they would briefly shine upon one another in stolen moments regardless of the chains keeping them in place, feeding that black-hole sun with the toil of their lives. Even as they ignorantly offered their offspring as sustenance to the continuance of their enslavement, mouthing mad prayers to a mad god, I recognized myself in them, in their suffering humanity, in the beating of their humanity.

It was no longer enough for me to be adrift or a’sail. I could no longer countenance this backwards upside down reverse bizzarro reality. Others were possible, were reachable, achievable. We could create them. We could create ourselves. I understood then why the Storm would always bring me back. 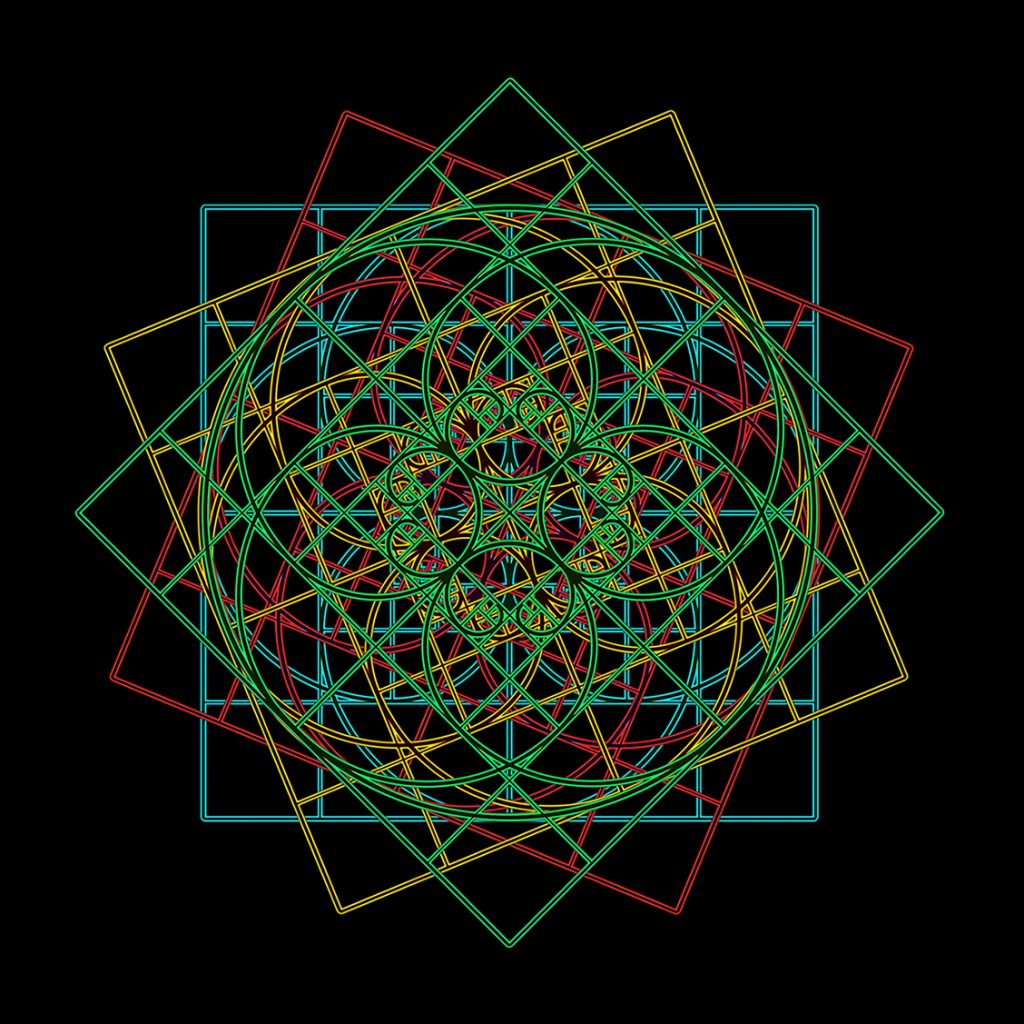 And so I built me a forge, and into that forge I go; its fire I tend with careful respect, as I do the cool waters waiting alongside. A fire enraged can only destroy, as with water in its frigid extreme. Sacred is my play, as I tenderly yet vigorously temper the elements of my making, dancing between intensities, earthily rooted, airily free, seeking balance, always balancing. Upon the anvil of my heart I lay, as I take myself in hand, grasping Truth’s own hammer I strike down with all my might, my passions released, expressed, yet measured and without cease. Breathing inspiration itself and with honesty and beauty as my guides, I make myself anew.

Whether a sword or a key or a luminous being or an entirely different dream, through patience and will, with love and humour we will be free. An example of possibility is itself a map, an encouragement, an enticement, a dare, a chance of a chance. Splendor surrounds us. And even the horror is itself a wonder. Here is discipline. Here is rescue. In each of us exists that same furnace, that very forge. We are each one of us creators, authors, smiths, divine and demonic, and much else besides and beyond. We are made of the same mysterious unknown as the Great Mysterious Unknown itself, and are as worthy of awe and respect. Our responsibility is clarity itself: Love Life. Live Free.