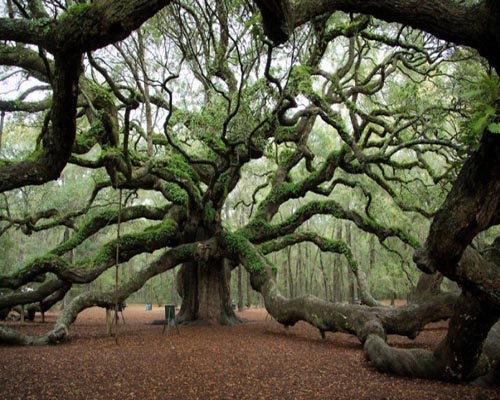 There are approximately 2 million reasons to love trees … but we’ll start with these.

It’s no secret that I go nuts for the trees. I talk to them, I pet them … the Lorax is my spirit animal! So it’s no surprise that Arbor Day, generally observed on the last Friday of April, holds a special place in my heart. What could be better than a day dedicated to observing the importance of trees and better yet, to planting new ones?

It’s funny because I often think about how vital it is to be good stewards to trees – but when I muse upon how critical they are for us, I think that maybe I have it all wrong. What if it’s the trees who have been acting as good stewards to us all along?

Arbor Day in the United States was officially designated in Nebraska in 1872 – pioneers moving to the treeless plains realized they needed trees for things like fruit, windbreaks, fuel, building materials and shade. Essentially, food and shelter and the necessities for survival. So who’s taking care of whom here? We need trees, but do trees need us? They need us not to cut them down indiscriminately, for sure, but really they seem to be doing most of the work in this relationship.

And so with that in mind, here are just some of the many many reasons why it’s imperative to respect and celebrate the trees; the fact is, humans need trees much more than trees need humans! Consider the following:

1. Trees work hard to right our wrongs
According to the U.S. Forest Service, the trees around the world removed about one-third of fossil fuel emissions annually between 1990 to 2007.

2. They help keep our houses clean
A study from Lancaster University found that trees by the road reduced the presence of airborne particulate matter (pollution from cars) inside nearby homes by 50 percent.

3. They ease the workday
Office workers who can gaze upon trees from their windows report less stress and more satisfaction, according to a study from Chungbuk University, South Korea.

4. Trees feed us, they give us pie!
Trees provide food for people and wildlife beyond what we likely imagine. A single apple tree alone can produce up to 15-20 bushels of fruit per year. Apples, pie, important!

5. They provide shelter and support
Three hundred million people across the globe live in forests and 1.6 billion depend on them for their livelihoods, according to the World Wildlife Fund. Forests also provide habitat for a mind-boggling array of plants and creatures, many of which we don’t even know about.

6. They show us how to age gracefully

Rick Goldwaser/flickr/CC BY 2.0Seriously, talk about respecting your elders. The world’s oldest tree is an ancient bristlecone pine named Methuselah that lives at 10,000 feet above sea level in the Inyo National Forest, California. Methuselah is as old as Stonehenge and older than the Egyptian pyramids.

7. Trees keep cities cool
Trees lower urban temperatures by up to 10°F by shading and releasing water vapor into the air through their stress-soothing leaves.

8. They are giant humidifiers (kind of)
In a single day, one large tree can lift up to 100 gallons of water out of the ground and discharge it into the air.

9. They keep buildings comfortable
Of course shade trees produce shade; a lot. Strategically placed trees can cut down air conditioning needs by 30 percent and can save up to 50 percent in energy required for heating.

10. Trees are social beings
“They can count, learn and remember; nurse sick neighbors; warn each other of danger by sending electrical signals across a fungal network known as the ‘Wood Wide Web’ – and, for reasons unknown, keep the ancient stumps of long-felled companions alive for centuries by feeding them a sugar solution through their roots.” That’s not me being woo-woo, but a very poetic tree expert. Read more here: Trees are social beings

11. They devour carbon dioxide
Biology 101 tells us that trees absorb carbon dioxide (CO2), removing and storing the carbon while releasing the oxygen back into the air – but the amount is remarkable. In a single year, an acre of mature trees absorbs the amount of CO2 equivalent to a car driven 26,000 miles.

12. Likewise, they give us breath
Four people can get a day’s worth of oxygen from one large tree.

13. And water
In the United States, watersheds protected by forests provide water to more than 180 million people.

14. Trees fight crime
A study by the University of Vermont and U.S. Forest Service found that in Baltimore alone, a 10 percent increase in tree canopy corresponded to a 12 percent drop in crime.

15. They fight grime
In outdoor spaces with trees, there is less graffiti, vandalism and littering in comparison to place without greenery, says a study from the University of Washington.

16. They give us something to look up to, literally

© M. D. Vaden Landscaping and Tree/YouTubeThe tallest living tree is a towering 379.1-foot coast redwood (Sequoia sempervirens) in California’s Redwood National Park in 2006. Called Hyperion (above), it miraculously survives on a hillside, rather than the more-typical alluvial flat, with 96 percent of the surrounding area having been logged of its original coast redwood growth.

17. They pay us back
For each dollar spent on planting a tree in the city, they pay us back by up to five timesin terms of cleaner air, lower energy costs, improved water quality and stormwater control and increased property values.

18. They’re ersatz war heroes
Sure, we’ve long had a national anthem and bird – and we’ll always have apple pie and baseball – but what about a national tree? We got one in 2004, and it’s the oak. Oak trees have long been prized for their attributes as well as their place in U.S. history, from Abraham Lincoln’s use of the Salt River Ford Oak as a marker in crossing a river near Homer, Illinois, to Andrew Jackson taking shelter under Louisiana’s Sunnybrook Oaks on his way to the Battle of New Orleans, notes the Arbor Day Foundation. “In the annals of military history, ‘Old Ironsides,’ the USS Constitution, took its nickname from the strength of its live oak hull, famous for repelling British cannonballs.” See how well trees take care of us?

19. They are unassuming in their vastness
There are more than 23,000 different kinds of trees in the world; altogether, there arethree trillion trees on the planet. Yet they just humbly stand by, working hard and never making too much of a fuss.

20. Trees keep us young and rich
And when all else fails, there’s this: They may keep us young and rich! Research found that people who live on streets with high tree density are less likely to report a number of health complaints; and specifically, trees improve health perception in ways comparable to an increase in annual personal income of $10,000 or being seven years younger. You can never be too rich or too thin, and you can never live among too many trees. End of story.

To find out more about showing the trees some love, visit Arbor Day Foundation – and if you join, they will send you 10 free trees. Which is officially the best membership perq ever.