7 Reasons Why Cops Are a Menace to Society 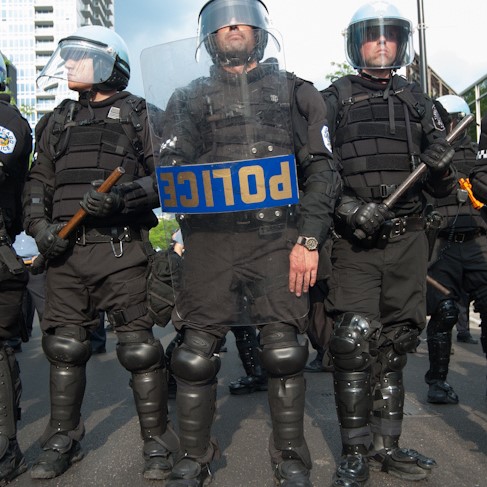 7 Reasons Why Cops Are a Menace to Society

Overreaching, power-hungry, ill-trained, hyperviolent cops are a menace to society. There’s no way around this. Not even cop apologists can deny the fact that cops overreach in their duty, they have way too much power, they are ill-trained, and they are hyperviolent.

As it stands, cops do overreach. They are ill-trained. And they are trained to be hyperviolent. That’s the bottom line. In order to dig ourselves out from underneath this bottom line—indeed, in order to transform the “menace of cops” into the “benefits of policing”—we must at least take care of the following seven reasons why cops are a menace to society.

“The significant problems we face cannot be solved at the same level of thinking we were at when we created them.” ~Einstein

We cannot fix the problem of police incompetence by attempting to solve it at the same level of thinking we were at when we created it. That means a complete overhaul of our policing system. Starting with academies and basic training. No more bigoted, prejudice thinking. No more unvetted psychopaths with guns. We need a police force that we can trust, not fear.

If this weren’t bad enough, cops don’t have critical thinking skills. They are trained to think in black and white. And they purposefully don’t allow people with above average IQs to become officers. This is a travesty. Police need to be held to a higher standard.

Quota-junkie cops are a menace to society because they will go out of their way (overreach) to find criminality. This tends to create criminals where none would have existed otherwise. This is yet another blatant travesty of modern-day policing.

If police brutality, extortion, and overreach of power weren’t enough, unscrupulous police officials have also been manipulating the deeply flawed federal and state civil asset forfeiture laws that give them permission to seize, keep, or sell any property allegedly involved in a crime.

The same should apply to cops. They don’t need to be out patrolling the streets looking for violence. If there’s violence, then they should respond. Simple.

A firefighter defends the public from fire. That’s their job. Police should defend people and property from violence. That should be their job. But the current system of policing overreaches. Which leads to extortion, civil asset forfeiture, and quota-junkie cops who oppress their communities through the enforcement of petty, arbitrary laws.

3.) Cops are dangerous and hyperviolent:

“He who makes a beast of himself gets rid of the pain of being a man.” ~Samuel Johnson

The modern-day cop is militarized and over glamorized. They are judge, jury, and executioner in the streets. I mean, why in the hell do cops have tanks? It’s the height of insanity. And yet here we are, a brainwashed public convinced that it’s somehow okay. It’s not.

The militarization of the police is the greatest tragedy of justice besides rampant racism and the failed war on drugs.

Police do not need tanks, AKs, and bazookas. We have a military for that. And the military is not in place to police a nation, but to protect it. A militarized police force is an egregious afront to a peaceful nation. It’s the government’s underhanded way of saying it is willing to go to war with its own citizens.

Should we go as far as to disarm the police? Perhaps not. But we should at least de-tank them. Leave militarization to the military. And to all those fretful cops whining “I fear for my life,” you should be fired. If you can’t handle the heat, get out of the fucking kitchen.

4.) Cops are trained to be offense-minded rather than defense-minded:

Offense-minded cops violently push arbitrary laws upon others who have not given their consent. Such policing cannot be considered peaceful. It is violent and immoral as per the Non-aggression Principle and the Golden Rule. Such policing holds violence in a higher regard than individual consent. Therefore, such policing must be considered unhealthy, irresponsible, immoral, and unjust.

Armed with solid, ethical, and intelligent training on how to deescalate hostile situations, the defense-minded cop is equipped to adapt and overcome with a defense-first, violence-as-last-resort mindset.

Sadly, police have become weak men creating hard times. They’ve become a violent, offense-minded menace to society. The new league of strong men will have to be those with the courage to police the police themselves.

Policing is no longer a matter of protecting and serving, but a matter of blind allegiance to law and order and obediently following the chain of command out of fear of the thin blue line. This weak form of policing has created hard times through aggressive overreach and oppressive extortion. And the checks and balances aren’t there because any potential defense-minded police (as exceedingly rare as they are) are fearful of the thin blue line enforced by offense-minded police who have the monopoly on violence.

Police will continue to be a menace to society as long as the thin blue line exists. It fosters an ‘us versus them’ mentality that further divides police from citizens while incentivizing police corruption.

“Who could overturn with reason what the mob has once believed without reason?” ~Nietzsche

Created by the Supreme Court in 1982, qualified immunity grants immunity to government officials who violate constitutional and civil rights laws. It’s a “legal” loophole that police departments and crooked cops have been exploiting and abusing since its inception. This license to lawless conduct must be revoked. Until then, police will continue to act like the law does not apply to them.

In a world where those who get paid to enforce the law break the law instead, policing becomes null and void. It becomes a laughingstock. Indeed. It becomes a menace to society.

The fact that this is a systemic problem created by the supreme court reveals how corrupt the leviathan of the state has become. In such a world, in such a state, checks and balances must come from the people. We the people must police the police. When the state fails to regulate itself, the people must regulate the state.

7.) Cops are trained to escalate rather than de-escalate tense situations:

“The party told you to reject the evidence of your eyes and ears. It was their final, most essential command.” ~George Orwell

Most cops have cartoons for brains. They enter the police force with delusions of justice that don’t match reality. Having been brainwashed by unrealistic TV shows and movies about “hero cops” fighting against “evil criminals,” and indoctrinated by a willfully ignorant culture that glamorizes cops as an ideal, the naïve cop enters the police force with outdated notions and parochial black and white thinking.

This naïve, brainwashed cop with cartoon for brains, is then ill-trained to instigate the populace by escalating rather than de-escalating social encounters. They are trained to harass citizens into “slipping up” so that they can discover a “crime.” Which usually creates a crime where none exists.

There is no psychological training for how to deal with power, so these cops never learn how to be responsible with the immense power they are given. This leads to the abuse of power. For, as Lord Acton stated, “power tends to corrupt, and absolute power corrupts absolutely.” There is no other field of work where power comes so close to being absolute. In what other job does one have the power of judge, jury, and executioner? None.

Cartoon-in-the-brain thinking combined with ill-training compounded by power, creates a cop with the notion that they are an invulnerable cop first, and a vulnerable human second. All notions of compassion and humanity are buried beneath the heavy weight of having way too much power over others. The result? An abomination: Power-tripping cops who escalate rather than de-escalate because of their massive egos.

This article (7 Reasons Why Cops Are a Menace to Society) was originally created and published by Self-inflicted Philosophy and is printed here under a Creative Commons license with attribution to Gary Z McGee and self-inflictedphilosophy.com. It may be re-posted freely with proper attribution, author bio, and this statement of copyright.