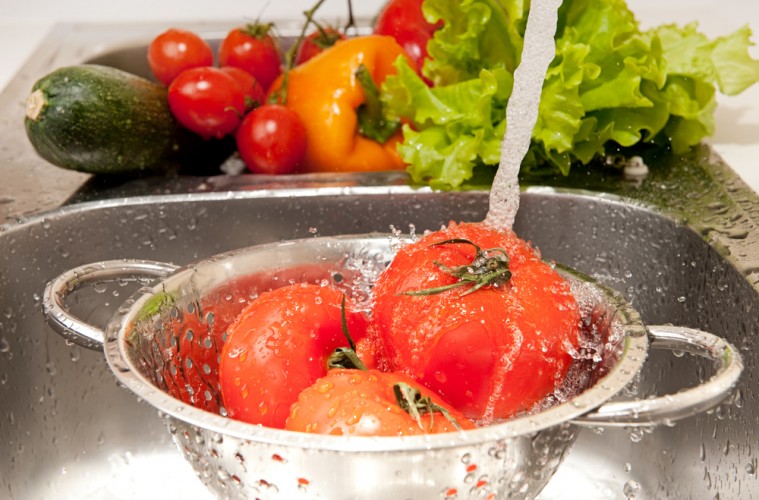 HOW TO REMOVE PESTICIDES FROM NON-ORGANICALLY GROWN PRODUCE

What’s the difference between organically grown produce and non-organically grown produce? Well, according to the United States Department of Agriculture (USDA), organic farms and processors must not use any genetically modified ingredients. This means that organic farmers can’t plant GMO seeds, an organic cow can’t eat GMO feed, an organic soup producer can’t use any GMO ingredients, and so on. Farmers and processors must show that they aren’t using GMOs and that they are protecting their products from contact with prohibited substances from farm to table. In order for something to qualify as organic, it must also be free from most synthetic materials, like pesticides and antibiotics. (source)(source)

Conventional food, obviously, has none of these restrictions. Food grown in this way can be genetically modified, sprayed with pesticides, and injected with antibiotics.

“How could we have ever believed that it was a good idea to grow our food with poisons?” – Jane Goodall

When it comes to pesticides specifically, organic and conventionally grown produce are miles apart. A recent study conducted by researchers from RMIT University, published in the journal Environmental Research, found that following an organic diet for just one week significantly reduced pesticide exposure in adults by 90 percent. (source)

Cynthia Curl, an assistant professor in the School of Allied Health Sciences Department of Community and Environmental Health at Boise State University, recently published a pesticide exposure study in the journal Environmental Health Perspectives. Results of her research indicated that among individuals eating similar amounts of vegetables and fruits, the ones who reported eating organic produce had significantly lower OP pesticide exposure than those who normally consume conventionally grown produce. You can read more about that here.

Charles Benbrook, a professor at Washington State University, conducted similar research in response to a letter accepted for publication in the Annals of Internal Medicine, which he argues significantly understated the health benefits of switching to an organic diet. He outlines the flawed methods used in the paper and then goes on to accurately measure the risks and benefits of organic and conventional produce, calculating a 94% reduction in health risk attributable to eating organic forms of six pesticide-intensive fruits. He also compares the amount of nutrients present in these fruits to those in their non-organic cousins:

In carefully designed studies comparing organic and conventional apples, strawberries, grapes, tomatoes, milk, carrots, grains, and several other raw foods, organic farming leads to increases on the order of 10% to 30% in the levels of several nutrients, but not all. Vitamin C, antioxidants, and phenolic acids tend to be higher in organic food about 60% to 80% of the time, while vitamin A and protein is higher in conventional food 50% to 80% of the time. (source)

Below is a very interesting clip titled “The Organic Effect” from the Swedish Environmental Research Institute. Watch what happened when this family decided to switch to organic food. Here is the full report.

How To Remove Pesticides From Non-Organically Grown Produce

“Children today are sicker than they were a generation ago. From childhood cancers to autism, birth defects and asthma, a wide range of childhood diseases and disorders are on the rise. Our assessment of the latest science leaves little room for doubt; pesticides are one key driver of this sobering trend.” – October 2012 report by Pesticide Action Network North America (PANNA) (source)(source)

Whether your food is organically grown or not, it’s still a good idea to wash your produce before you eat it it. We stumbled upon some great advice at fitlife.tv on how to do this effectively.

One technique is to use homemade produce spray, which Sasha Brown describes below:

Simply mix together a tablespoon of lemon juice, a cup of water and 2 tablespoons of baking soda. Mix them well until the baking soda has completely dissolved, then put the mixture into a spray bottle. Spray it onto the fruits or vegetables you’d like to, leave it there for 5-10 minutes and then rinse it off.”

You can also use vinegar and water, filling the (clean) sink with 4 parts water and 1 part vinegar. If you keep the produce in here for up to an hour, you can simply rinse it off and eat immediately, or store for future use.

Brown also mentioned a couple of store-bought choices, one of which is a certified kosher product made with all natural ingredients called Environne Fruit and Vegetable Wash. Another is Biokleen, which contains lime peel and grapefruit seed extracts.