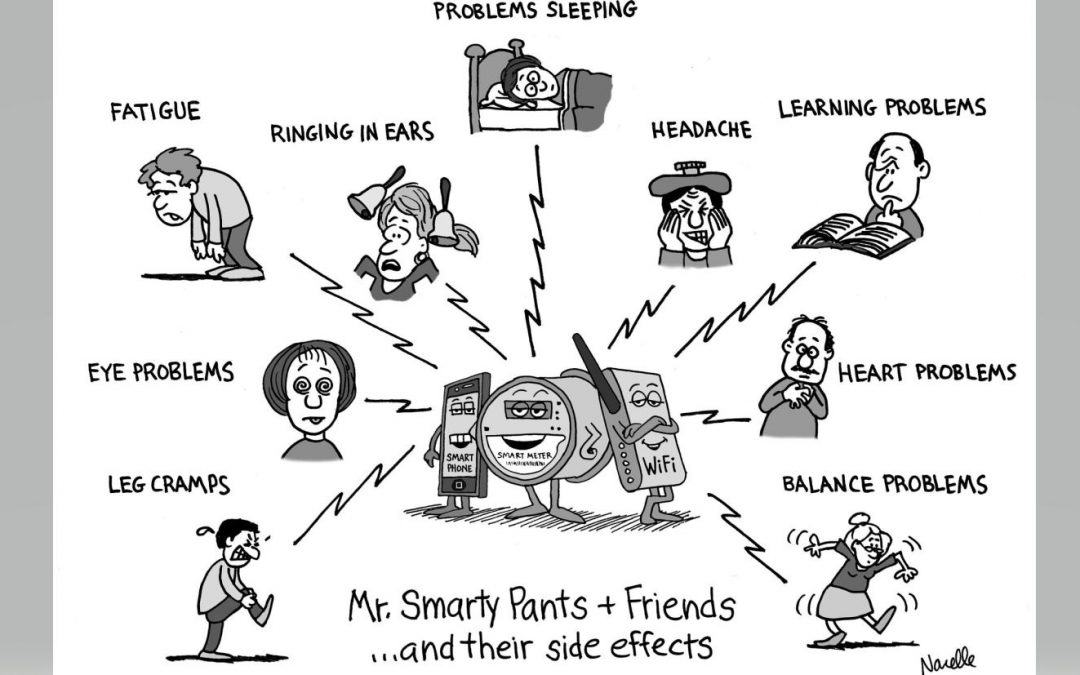 A Meme Illustrating Electromagnetic Hypersensitivity: Do Any Of These Symptoms Apply To You Or Your Family Members After An AMI Smart Meter Retrofit?

Very serendipitously the meme above showed up in my computer’s inbox the other day.  Attribution needs to be given to emfsafe@sonic.net.

What an impressive graphic illustration of EHS / IEI symptoms!

However, these adverse health problems probably will become nothing short of an imagined “picnic in the park” when, and after, 5G millimeter wave technology platforms are rolled out across the USA and the entire globe from various formats, including special mammoth drones high above the Planet.

We are entering an era of total tech domination wherein no one will be safe from constant 24/7/365 microwave radiofrequency radiation, which no one in microwave technology industries considers harmful even though the U.S. Navy has such data on record for DECADES.  See “Zory’s Historical Archive of Microwave Radiation Effects.”

Considering the above effects have been known for ‘ages’, let’s think about this: 4G is not fully in use, but 5G is being fast-tracked-rolled out in order to implement the Internet of Things and the computer-human brain connection.

However, 5G is categorically known to be one hundred times more powerful than 4G, which never has been tested for human health safety impact concerns, nor has environmental impact studies been done on it or any of the other progressive Generations (Gs) of microwave technology. Source for above images

Now the question of questions one ought to be asking oneself is this:

If the ultimate end result for 5G is brain-computer implementation and connection via Neuralinks proposed by Elon Musk, et al, what are the unknown dangers involved in brain biochemistry from breathing “smartdust” and genetically modified DNA strands being ‘vaccinated’ into one’s brain?

Has anyone really given serious thought to that one?

Will humans who are inoculated or vaccinated with Neuralinks be subject to brain anomalies such as strokes or cytokine storms?

After all, what’s the blood brain barrier all about, if not to prevent ‘stuff’ from crossing over into the brain? [A filtering mechanism of the capillaries that carry blood to the brain and spinal cord tissue, blocking the passage of certain substances. Online Dictionary]  But, that ‘frontier’ already has been breached by numerous excipients and toxic chemicals found in specific vaccines!  Could that be the reason for the rise in Autism and other brain anomalies in children, plus Alzheimer’s in seniors?

It is my opinion science has to be bridled to the point of “doing no harm” to human physiology—where’s modern medicine and the Hippocratic Oath—rather than “running off the rails” by advancing the human race into becoming ‘immortals’ or by constructing humanoid robots.

Science fiction is one thing; reality is another!

Which would you prefer?

Eat To Beat Disease, Foods Medicinal Qualities (2016)
Vaccination Voodoo, What YOU Don’t Know About Vaccines (2013)
A Cancer Answer, Holistic BREAST Cancer Management, A Guide to Effective & Non-Toxic Treatments (2012)
Our Chemical Lives And The Hijacking Of Our DNA, A Probe Into What’s Probably Making Us Sick (2009)
Lord, How Can I Make It Through Grieving My Loss, An Inspirational Guide Through the Grieving Process (2008)