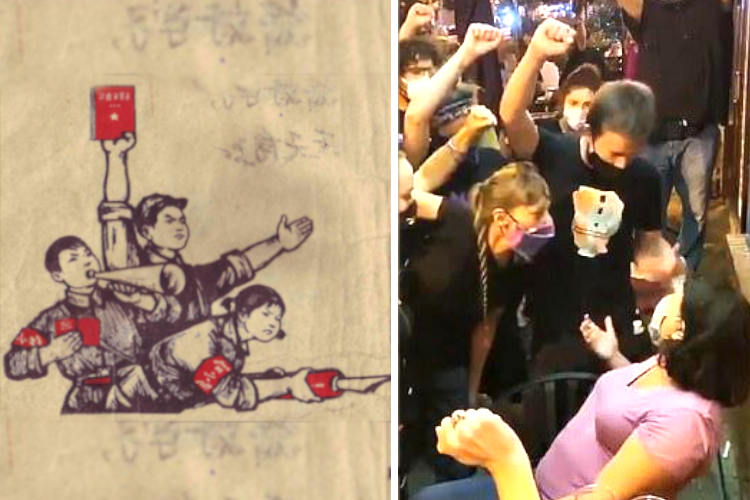 Without question the U.S. is devolving into a failed state and although people are still fond of calling it a democracy, it really operates more like a plutocracy, an oligarchy, a kleptocracy, or even a kakistocracy. But what’s in a name?

Something will emerge to replace it, and if you’re paying attention you can already see the classic signs of a Marxist cultural revolution taking place. There’s no shortage of pawns and foot soldiers demanding social justice, idealogical conformity, and supposed equality, while using all the strong-arm tactics, street violence, and language of Hitler’s Brownshirts or Mao’s Red Guards.

Let’s be honest, though, every form of government human beings have tried has failed, always decaying into authoritarianism, rampant corruption, and eventually mass murder. Under the banners of communism and socialism, though, hundreds of millions of people have been starved or murdered in just the last century alone.

America was once a beacon of hope for people fleeing these terrifying forms of government, but now we’re under assault by ‘woke’ mobs and cancel culture, whose best idea is to go backwards in time and redo socialism or communism yet again.

But you don’t have to read history books to grasp this, because, there are plenty of people alive today who’ve survived communism, and who are watching in horror today as mindless mobs demand a regression into something far worse than late stage capitalism.

My wife, for example, grew up in communist Poland. Her childhood was marked with food lines, food rationing, military presence everywhere, party loyalty, political persecution, spies, domestic surveillance, and so on. It’s a terrible way to live, and so her family went through the very risky and painful process of defecting and immigrating to the United States for freedom and opportunity.

I recently saw a comment from a friend who grew up in communist China during the tail end of the most brutal era of Chinese state oppression. You can tell from her personal experience that she sees what I see, a bunch of supposedly woke people screaming and demanding something that we already know will ultimately only turn around and bite them when the time is right.

Juliet Tang comments on social justice warriors, cancel culture and the reality of the kind of society this creates, and I feel like her thoughts are worth sharing.

I got something to say about Cancel Culture and social justice warriors. I don’t get paid to educate some of the kids on the internet, so this is public service.

I’m the granddaughter of a woman who was canceled by SJW – except they were called Red Guards during the Chinese Cultural Revolution that started in 1966, which resulted in tens of millions of deaths and lasting famine in its ten year duration.

Those Red Guards were youths and school kids – brainwashed by the government to carry out acts of “justice” using means such as public humiliation, attacking, property destruction, and physical torture of other human beings.

No one was able to trust anyone, including close friends and neighbors.

You would come home one day and find everything you owned burned to the ground, and your loved ones dragged away (I suppose it’s like living in Voldemort times).

It’s none of my business whether you’re left or right, up or upside down, but I will say the left has been deeply corrupt – infiltrated by forces that harvest energy of fear and division from human beings, among other things…

Communism in America is what I’m seeing, along with many Americans who’ve turned into modern day Maoists, most likely without their awareness.

It’s the signature move for Marxists/Communists/Fascists to name one group of people as people’s enemy, so that they become the label of hate and everything that’s wrong in the society.

(Think: how did the Holocaust happen?).

The SJW are then free to use all tactics to project their shadows onto this group of people. The tactics include but are not limited to:

This is the cancel culture. And it’s NOT new.

I heard a month ago a woman coach who openly admitted she was a Trump supporter had her online business destroyed by SJW.

I could care less about how you feel about Trump, I just know it doesn’t give you the right to play God.

Besides, if your anger towards one man is so deep that you are willing to destroy the reputation and livelihood of a stranger you’ve never met, there are clearly bigger issues than Trump that need urgent attention.

Also, does that mean you’ll cancel millions of Americans who voted for a couple of our last presidents for justice for children?

Since in the 89-page Maxwell file Exhibit D which was opened a week ago, she clearly stated Bill raped (not had sex with, raped) young girls on Epstein Island, and our last president’s name is on the Epstein flight log along with tons of beloved celebrities and super models millions around the worship – that’s a whole lot of people to cancel.

(This is not a “conspiracy theory.” It’s all public information. Some very light research on any search engine will reveal it – it’s obviously not reported by mainstream media because they don’t profit from you knowing the truth).

It’s interesting that lately, the left has chosen to recruit many “woke” or “spiritual” people to be the modern day Red Guards – selling them a vision of righteousness under Marxist ideology.

I do believe some of the activists truly want to do good, but they’ve been greatly deceived and manipulated as pawns of the chess game.

It is safe to say that those who have started the causes care nothing about their SJW, and are herding them into the same slaughter house – the fate of the Red Guards in China.

No human being deserves to be canceled. Period. (Ok excluding pedos and half reptilians).

The lasting trauma a person suffers from being canceled, as well as the damage on their children and grandchildren, doesn’t seem to exist in the collective awareness.

I won’t get into the extensive details. Suffice to say the deep wounds are passed down in the DNA and they impact every area of a person’s life, until one generation develops enough consciousness to process and integrate it. It’s a long and painful journey.

The purpose of this message is this:

There are many distractions and distortions in our world right now – dividing us, and taking us out of our heart center.

The common enemy isn’t each other.

In the end, realize that while political parties, perspectives, and skin color have divided many, we are meant to stand together as a human race. Your attachment/loyalty to a political party should never override your willingness to be a decent human.

It doesn’t mean we go the other extreme, try to merge into Oneness and bypass our differences, which feels like some form of spiritual canceling to prevent us from choosing and acting.

I can say a lot about why surface level understanding of Oneness isn’t the solution right now. Maybe another post.

Rather, I invite you to come from the place of honoring our differences, and dissolving our separation. Part of this is to also lean into our multidimensionality and operate from all aspects of us, at the same time.

– A black girl from Alabama has had a different upbringing, than a white boy growing up in a middle class LA household, than an immigrant who spent her childhood in oppression and poverty in Communist China, than a Puerto Rican born and raised in the Bronx.

Yet our highest level is, and always will be, divinity.

BEING and BRIDGING all these aspects of ourselves will automatically birth a fuller version of who we can be at this moment, and paint possibilities we were unable to perceive, instead of swinging into and choosing from one polarity.

Embrace our diversity as a strength and celebrate it. Use our life experiences to positively impact and inspire. Work together. See and acknowledge each other and our uniqueness.

This is synergy – part of my work in integrating and rising above polarities.

Let’s say yes to all these – without idolizing and allowing soulless politicians, pedo celebrities, and fake influencers to manipulate us into canceling each other.

I have faith in us

If you truly want to dedicate your energy and efforts to conscious social change. Look into what B*ll Gates is rolling out in West Africa to test out his “trust stamp” digital ID as part of the v*ccine. The idea is to then introduce it to the rest of the world. Follow dr. Rashid Buttar on IG @drbuttar for more info. Again, not “theory,” fact. Search for it.

– Africans and African children have been used as guinea pigs to test out unsafe v*ccines forever.

– A lot of the common brand name clothes and shoes are made by child labor in sweatshops in China.

While we are at it, over 2 million children are being sold into sex slavery every year. US has the biggest market share.

Lastly, find out what’s happening in Melbourne. Any country could be next if we don’t stand together.

Spread the awareness, and act in integrity with your highest self – ask that part of you to decide before you let your emotions dictate you.

Don’t stand with gurus and influencers. Stand with Truth with a capital T.

Typing behind a keyboard, picking fights with other human beings and ridiculously canceling syrup, ice cream and God-knows-what from sheer ignorance is not a form of activism.

I’ve said this a while ago. Some call this the great awakening, I call it an individual and global maturation process.

For many, the idea of taking 100% radical responsibility for every aspect of who they be scares the bejesus out of them.

On the other side of fear, is true freedom.

Perhaps for the first time in this one particular timeline, we as a species will learn the true meaning of what it’s like to have complete sovereignty over our consciousness and bodies.

Let’s co-create a better world for ourselves, our children, and their children.

Love to you all.

Look at history’s trail of blood and you’ll hear all about the kings, queens, and rulers of our past, but you’ll hear next to nothing of the pawns and foot soldiers whose bodies filled the line to make their wealth and rule possible. Without such useful idiots tyranny is impossible. And for those who’ve already survived this in their lives, watching in horror as the U.S. falls, watching events today is like watching a slow motion train wreck. We already know how this ends.

This article (A Survivor of Chinese Communism Has a Warning for SJW’s and Cancel Culture Mobs) was originally created and published by Waking Times and is published here under a Creative Commons license with attribution to Dylan Charles and WakingTimes.com. It may be re-posted freely with proper attribution, author bio, and this copyright statement.