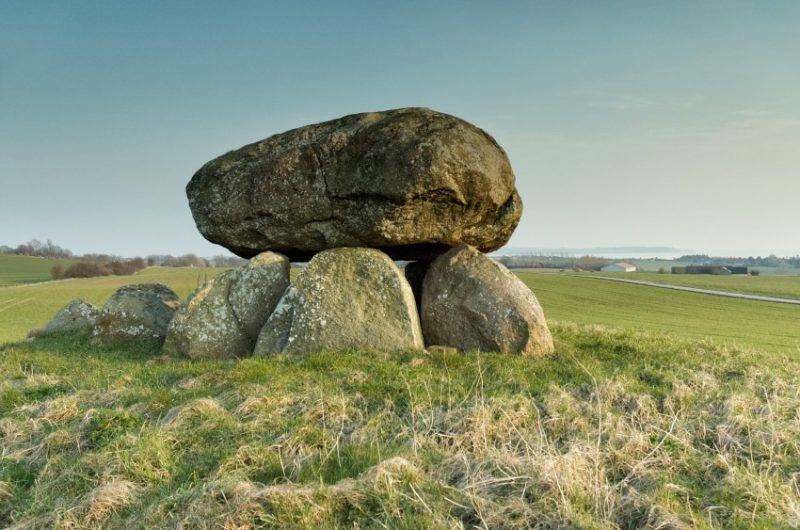 I am lucky to live in the land of my ancestors, even luckier that they left so much behind still visible to this day. One of the most common sights from our ancestral past is the burial mound. Although they vary in size and shape, examples of these mounds can be found dating from the Neolithic to long after the Anglo-Saxons first arrived. These enigmatic monuments to the dead would have dominated the ancient landscapes. Whilst we can never know for sure what beliefs lie behind their construction, or what fantastical ceremonies were performed at such places, we do know that the way our ancestors viewed the dead was very different to today.

Today places of the dead are viewed as eerie and unsettling. In the movies the Cemetery is the setting for countless horror spectacles. If the movies were to be believed all manner of ghouls and ghost are hiding behind the headstones or walking mysteriously in the distance shrouded in other worldly mists. All waiting for an opportune moment to exact some ancient twisted revenge.

As Children these types of movies and stories would have our senses in overdrive. When walking through such places every sound was amplified by our internal dialogue, our minds would swirl with attempts at rational reasoning of every bump and whisper on the winds, till the fear overwhelmed your reasoning and you and anyone with you, ran for their lives. As we grow older this fear fades, but for many the cemetery takes on a new and far more real fear, it becomes a reminder of our own fragile existence.

Death in our modern world is hardly talked about, it’s a subject that makes many silent. We don’t know what to say when someone tells us they have lost a loved one, or where to look when their face can no longer hold its composure. It’s almost become a taboo subject. Even on the news, when tragedy strikes, it’s all just hopes, prayers and empty stares.

As a society we cannot handle death. We have separated it almost entirely from our daily lives despite its inevitable and persistent truth. Cemeteries become haunting places, not by ghost, but our repressed fears, filled with the sadness of loss and reminders we would rather ignore.

This unhealthy view of death in our modern world, has in my opinion lead to many social and psychological problems. The fear to talk of the dead, or to walk in their domains, cuts us from a sense of belonging, from who we are. Without belonging we become atomized. This begins to swirl in a vicious circle, the more atomized we become the more our sense of belonging is reduced. The self becomes all encompassing, thus death becomes total isolation, a place of nightmares, a silent grave, an eternal prison dark and isolated like the burial grounds we fear tread.

This inability to face death has weakened us beyond measure. A people who cower from the inevitable can never achieve greatness. Just as a people who do not hold in reverence and celebration the soil nourished by the blood of their dead will never belong anywhere. Such an isolated and fearful people, will inevitably succumb to tyrants who will spare them from their fears with promises of protection and glorious other worldly rewards in death for the simple price of submission. Such a craven people will eventually hand over control of their affairs to be spared responsibility, their weapons to be spared wars and abandon their old Gods in favour of one who tells them their meekness will be rewarded in death. Sadly for them, the more you give away your responsibility the more hopeless and desperate you will become.

Just as the fear of death can lead to the degradation of a people, a people who embrace it can find liberation within its truths.

Our ancestors certainly did not hide from it, many of their greatest monuments were constructed in its honour. The Chambered Tombs of the neolithic, such as Maeshowe in Orkney and Newgrange in Ireland, would have been monumental endeavours requiring all members of the group to participate. Valuable time and energy was spent constructing these monuments to the dead. They would have been central in all religious practice, a place where people gathered at all special occasions in veneration for those who came before.

We know from archaeological digs that many of these tombs were constructed on former dwellings of the living. Maybe constructed in honour of some pioneering family, some brave souls who first settled the lands. These were not just monuments of stone either, in many we have direct evidence of human remains. The wear on these bones also signifies that they were regularly handled by the living. Whilst we do not know exactly what was done with these bones, evidence from the later Bronze age might give us some clues.

Relatively recent finds and via the reanalysis of older ones have shown that mummification was widespread throughout Bronze age Britain. Mummification in Britain was not like that of Egypt though, and whilst it is believed some bodies may have been kept intact with soft tissue preserved, in many cases the flesh had already been removed. It is believed that the main objective was to keep the connective tissue that holds the bones together complete. This is further evidenced by finds where it appears holes have been drilled into bones to tie, or peg them back together.

As always what the exact purpose of this was unclear, but given the wear on Neolithic bones and the fact that many of these “mummies” were buried sometimes hundreds of years after their mummification, we can say they wanted to keep them around.

Unlike Neolithic Chamber tombs, Bronze age burial mounds were mostly earthen structures, although they were still sometimes built in the place of former houses. Certainly these bodies would not of been placed in the mounds and dug out, so they must have been kept within settlements, maybe in special buildings or just everyday households. Wherever they were kept it would seem that for people living in bronze age or Neolithic Britain coming face to face with the bones of your ancestors would have been a common occurrence.

Not all people were given spectacular burials, in fact in the Bronze age almost all ways of dealing with the dead are utilised. Cairns, Cists, Mounds were all used, and no way of preparing the body was off limits, as they practised cremation, mummification and burying the body whole. We obviously cannot know what each type meant, but it would be reasonable to assume that how you were buried was governed by how you lived.

Whilst there are still many intrigues to uncover about the burial practices of our ancestors, what we do know shows us a vastly different way of viewing both life and death in the ancient past. Being able to stand face to face with a distant ancestor, albeit in skeletal form, and being surrounded by mounds, Cairns and cemeteries all dedicated to your dead would have had a profound effect on your sense of belonging and purpose.

Living in such an environment you would never be in any hesitation of where you came from, or who you were. Their presence would be a constant reminder that the land you live on, and its prosperity was not some “god given right”, but due to the hard work and effort of those before, and that if you wished to pass it on to your posterity you would have to rise to the challenge as they did.

Imagine walking past monuments maybe thousands of years in age, or a cemetery, with cist and Cairn, all belonging to people whose names and deeds you know, and whose blood runs in your veins. The cemetery became a place of memory, that spanned back to the beginning and would continue as long as you held true your duty. The sense of belonging and purpose would have been overwhelming. The sense of connection would be undeniable, now imagine someone wanting to take that from you?

Man and land became one as the essentials of each, the blood and soil merged underfoot. There would be little doubt of where you belonged and for the more ambitious among the folk there was also something to strive for, a lesson of ambition hidden with the places of the dead. Maybe it was your desire to become the centre of a new land, to spread your bloodlines to new territories. To have your mound be the focal point of a village and your memory to be honoured as the first of your kin.

I believe it would serve us well to re remember these old ways when faced with dealing with the dead. In these times, when the sense of belonging is lost, and deeds are measured by who can see, not what is right. To remember that we are the legacy of the past, that we are born of their deeds and memory and that they LIVE on, in us. To remember that the only sadness in death is a life unfulfilled.

all men are mortal.

nor a noble name.