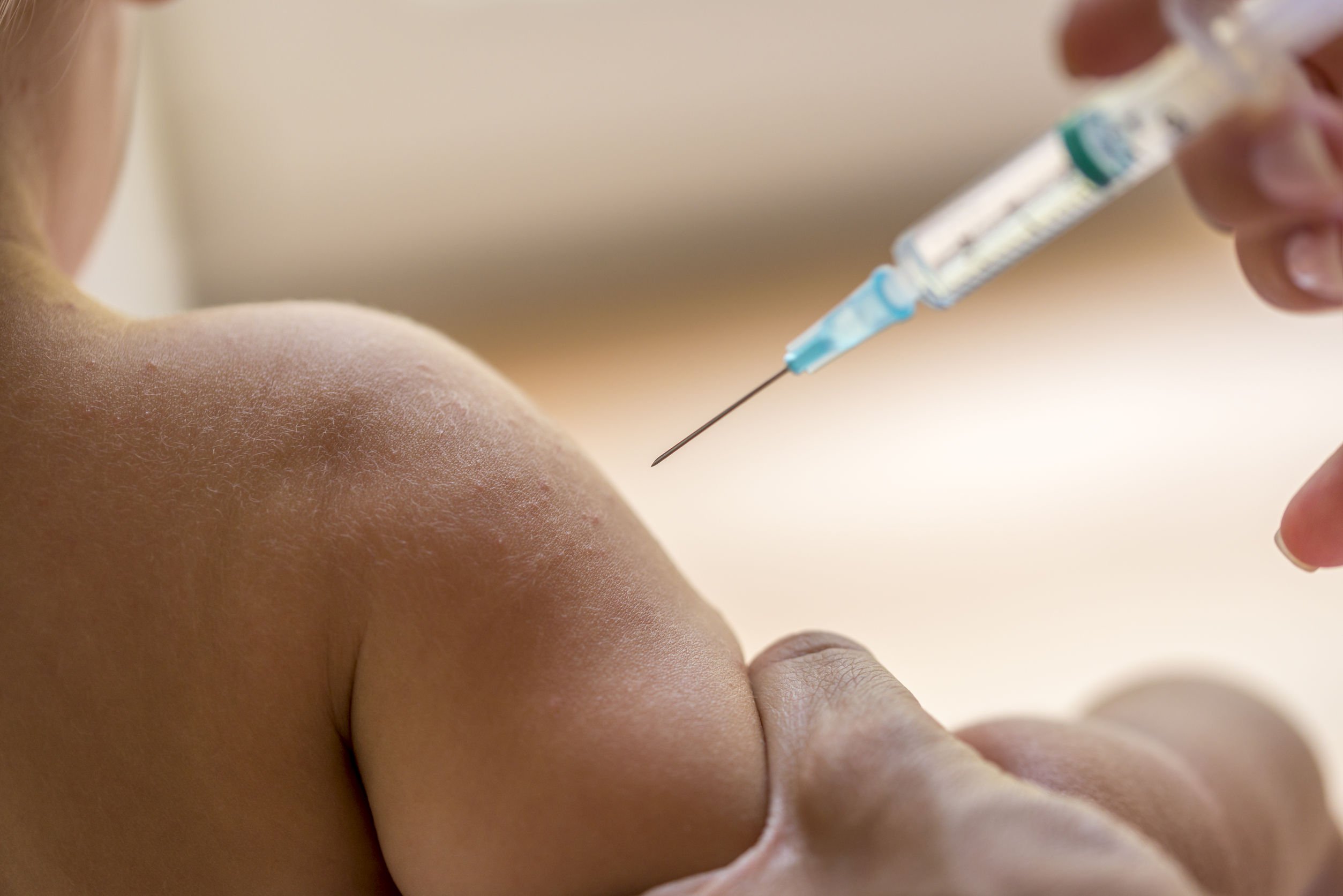 Discussing vaccines and autism isn’t an explosive topic, it’s thermonuclear. Both sides of the argument feel, with great passion, that the health and welfare of children is at stake. Much of that passion is the product of several lies told repeatedly. These lies form a foundation for self-interested parties to deny, obscure, and misdirect the truth about what’s happening to millions of children. They pit well-meaning parents against well-meaning parents. Remove the lies and you’re left with a deeply disturbing explanation for why so many children seemingly have autism out of the blue.  JB Handley – Author of How To End The Autism Epidemic

How To End the Autism Epidemic – with many people saying is the best book on the link between vaccines and autism – is already an Amazon best seller (it hit the list even before it was released) and has recently been sent to all of the senators in Washington.

Author, JB Handley, whose own son Jamieson, showed warning signs that very night after receiving his 6 vaccines given at his ‘well baby’ appointment at two months of age.  Handley shares that something was clearly very wrong after that visit to the trusted family paediatrician, and his once perfectly healthy baby quickly morphed into a very sickly child.

Jamieson quickly regressed into autism and was often in constant pain with severe gut issues, his future now ruined.  This tragedy, that has also become millions of other parent’s far too eerily similar nightmare, propelled Handley on a journey that has become his life’s mission and purpose. Nothing fuels a parents fire to do something, more than that of their own child’s suffering.  It also is the reason why parents of other injured children won’t go away, until something is done about this crippling crisis.

JB, who studied at the prestigious Stanford University, has a very sharp grasp and innate ability to interpret and convey science, which is truly impressive. The research gone into this book is meticulous.

The book is written in a way that is concise and incredibly compelling, but most importantly, it is easy to understand.  This is a very important factor when discussing vaccine topics, simply because much of the ‘vaccine science’  in the last few decades has been manipulated, and you usually need a very sharp mind to see how this has happened.

The way studies are written actually go over most people’s heads, and this is why most don’t look at the studies themselves in detail, for they simply do not understand what things mean, or how to question the data presented, let alone to see how the statistics were manipulated.

The book enables the reader to clearly see inside popular studies which are repeatedly shared in the public to shut down further discussion on issues surrounding vaccine safety and efficacy.

Whilst JB writes only briefly on his own families experience with autism, the book relies mostly on information from science, emails from FOIA requests, court transcripts, and expert testimonials and shares some truly shocking things.  I won’t go into all of them here of course, but there is one testimony from a court case with a leading ‘vaccine expert’ Dr. Stanley Plotkin, that you should be aware of – so that it encourages you to question the ethics of the entire industry – and to purchase the book to find out what other bombshells it contains.

Whilst denying it at first, when questioned by Lawyer Mr. Siri, Dr. Plotkin admitted that he had conducted experimental vaccine tests on mentally disabled subjects (both adults and children), as well as babies born to mothers in jail.  Testing on the most vulnerable of people means that you can conduct studies where the results can easily be manipulated (for example, you won’t have to say in the study that vaccines cause mental illness if a test subject already is mentally ill).

This is highly disturbing to say the very least, but these sorts of ethics are not at all rare in the vaccine industry.

The book also exposes financial interests that many of the well-known vaccine proponents such as Dr. Paul Offit, Dr. Peter Hotez, Dr. Eric Fombonne and Dr. Paul Shattuck have.  Combined it’s many tens of millions.  It’s easy to see why they are used publicly (and so often)  to provide ‘expert commentary’ that vaccines are safe and effective.

For decades, the concern regarding vaccine ingredients was mainly around the neuro-toxic thimerosal, in recent years, there has been a switch to focus on aluminum, an adjuvant found in many of today’s vaccines at alarmingly high amounts. JB has written extensively about this in articles and information is also found in his book.

Autism is a disease, and it is not inevitable. J.B. Handley’s elegant synthesis of what we know and what we need to know argues that autism could and should be preventable. I agree with him.―Professor Christopher Exley, PhD, fellow, Royal Society of Biology; professor of bioinorganic chemistry, Keele University

Like it or not, the subject of whether or not ‘vaccines cause autism’ is one that won’t go away, and if anything, becomes talked about more each day, simply because so many parents are sharing that they too, saw something happen to their own children that they can only put down to recent vaccines.

The Implications of Truth

Despite what we are told by the mainstream media and medical industry when it comes to vaccines causing autism, the science here isn’t anywhere near settled.  Some of you might perhaps realize this ‘parroted’ term is perhaps repeated on purpose, it’s used to ‘shut down’ further discussions.  And this should make you question why?  Why are we not able to ask important questions, regarding safety, ingredients and studies?  What other drugs, that you know of, are we not allowed to question?  Could it be down to money?

Imagine if it did come out that vaccines triggered autism in children.  Wouldn’t there be a tidal wave of court cases with hundreds of thousands of claimants wanting compensation?  I wonder how much money this would amount to? The US Government has already paid out close to US 4 Billion (with taxpayers money) and that is for vaccine injury, not for Autism claims.

It is already estimated that for the cost for caring for people with autism will surpass $1 trillion in 2025, and this figure is nothing to do with compensation.  It is a frightening future that we have and one that is headed our way very soon.

The Science is Not Settled…

Science is never settled because it is a field that should always be encouraging further research and critical questioning.  Science has become so corrupted over the last few decades that it is actually an area that should now perhaps raise suspicion, especially where big profits are involved, and especially if the companies who produce the products aren’t held responsible financially if something goes wrong.

Vaccines, unlike drugs, are protected by a 1986 law that gives protection to all vaccine manufacturers. They cannot be sued.  This is disturbing to most people when they discover this, and with very good reason.  Without liability, why would a company bother to change how something is made, to improve it, if no one is going to come knocking on your door demanding change and making you pay anyone that sues you for damage? It’s called the National Childhood Vaccine Injury Act.

It is particularly intriguing to see that vaccine research is an area that vaccine manufacturers and those that speak for them, staunchly seem to not want this to be looked into further – especially around the issue of vaccine safety, and it’s connection to autism.

Vaccines have not been tested adequately in relation to them increasing the rates of autism, you might be shocked to know that only one, the MMR  (and also only one ingredient, Thimerosal) has been studied by the CDC – with questionable results at that.  They never mention these other studies on Thimerosal toxicity or acknowledge the comments made by their longtime scientist Dr. William Thomspon, who blew the whistle on the MMR vaccine.

Vaccines contain so many different ingredients and to have just studied one, seems beyond incredulous. With over 20 different types of vaccines (some which have multiple diseases in them) this is terrible ‘evidence’ that vaccines don’t cause autism.  The CDC (which, unbeknownst to the average person, actually owns 20 vaccine patents) cannot state that is true, because they have simply, not studied them all.

So the science here is most certainly not at all ‘settled.’

What does the US vaccine court say about vaccines causing autism?

Inside JB’s book is a chapter titled ‘The clear legal basis that vaccine’s cause autism’ is dedicated to how the vaccine court operates, and where it was admitted that a child’s injury, and subsequent diagnosis of autism, was because of a vaccine.  One case, which was leaked to the public, regarding Hannah Polling, whose family was given $20 million in compensation, under the condition they never speak out about the finding.  For those that want to deny there is a connection between vaccines and autism, this is a chapter they will have real trouble refuting.

Autism is predicted to affect a whopping 1 in 2 children by the year 2025. Yet nothing seems to be being done by the medical industry about the ’cause’, and certainly nothing effective for its treatment.  Many families are suffering in silence and are becoming impoverished looking after their sick children.

For those in countries like Australia and the UK, where people rely on the socialized ‘free’ health care system, many children are not being given the testing and the treatments that they need. Whilst genes are typically blamed for autism, yet there is no definitive gene for autism.  The money being put into autism research is just not going into the right areas, that would make a huge positive difference.  If it was, the autism rates would be going down.

I feel this is important to note, that the book is not about making the author money to line his pockets. 100% of the profits from How To End The Autism Epidemic are all being donated to several organizations, to help families dealing with autism.

We could do something about autism, and we could do it quickly if our Governments paid attention. The answers are found in this book.

If you are concerned about this issue, want solid science and to want to know the truth about how the vaccine industry operates, this book is for you.

To purchase the book in either paper back of kindle, please click here Remember, the proceeds go to helping other families dealing with autism.

Below is an interview with the author JB Handley

.Vaccine Court has paid 3.7 billion in damages to families