The BC Hydro Scam by Mark Hermary 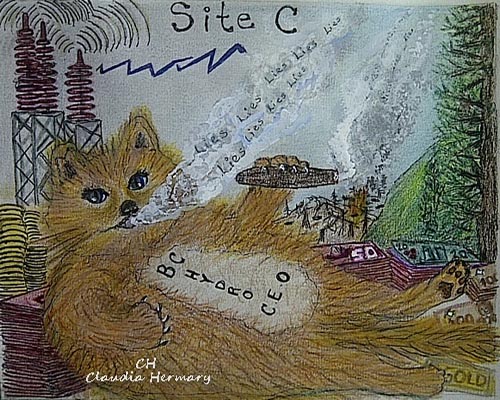 Back in 2011, the then Auditor General of BC, the Honourable John Doyle, (and he was an honourable man) had posted an 11 minute video explaining that BC Hydro was deferring 27 accounts, you know, the loan accounts that accumulate compounding interest that never get ANY funds whatsoever put into them. And at the time, Mr Doyle explained quite simply, that those deferred accounts would blossom from around $2.2 billion to $5.1 billion by 2017 via only the compounding interest we will eventually send to foreign bankers once the CEO/CFO of Hydro decides to begin to pay on these accounts.

As I’ve been following this closely since (along with the smart meter fiasco), as any concerned rate payer should be, I was astonished to learn that the actual number will not be $5.1 Billion next year, the numbers are already at $5,433,000,000.00, so next year will surpass the $6,000,000,000.00 mark! We the rate payer, will be paying for this sooner or later, one way or another.

Why defer accounts as such? Well, it’s quite simple really, it’s to make it seem to the public that they are is making huge money, when in fact they are going bankrupt! Without those debts on their books the profits look huge, and they then feel justified in giving themselves a huge raise and a bigger bonus at the end of each year! Thank you rate payers… from your pockets to the CEO etc!

There is a gentleman I’ve known for a long time who’s explained a scenario to me within the BC Hydro matrix. His brother is a manager at a mechanic shop for BC Hydro, he makes $180,000.00 a year. There are 8 mechanics at the shop, and two receptionists/assistants to answer phones, file papers etc. All normal in any business you would see anywhere. And that would be the same in this scenario, except he actually has 14 managers above him within his same office, all making higher wages with expense accounts and vehicles paid for by the corporation… er, I mean you the payers of these employees wages! You are their cash cow! You are suppose to be their bosses… do you feel like their boss? Would you allow this in any business you were to run?

Is this is a working model that is sustainable? Of course not, 10 employees can easily be managed by 1 person… in any business. BC Hydro has 15… and they are very well paid, at your expense, and this is just one of many shops in all of BC! Do you understand that this means you are being financially raped… period!

Think you’re paying too much for power today? Brace yourselves…

If this is all not quite enough, BC, via the minds of the thieves in power who claim to work for you and I, but clearly do not, have contracted the future of all British Columbians away to the tune of $76,000,000,000.00, yes, that’s a B. If you read the material below, you will see how clearly this is exposed so anyone can understand how we’ve been stolen from. And this is not even to mention the Site C Dam, another unnecessary project paid for by you and I that we already owe hundreds of millions of dollars towards, with compounding interest that will be added to all this eventually. We do not need more power in BC, we do not use it. We actually spill our own water to make power, and instead, because of contracts, are forced into buying power from the IPPs for literally 10 times as much! We have also been duped into making foreign Corporations wealthy!

Many believe we need the jobs, but we pay to give people jobs for something we do not need, all the while devastating thousands of acres of land? How does that possibly make any sense? Might as well build a bridge from Alaska to Vancouver Island while we’re at it. Just take a look at a few pictures below at what’s been done at Site C Dam already… and they’re just getting started! Disgusting!

So while the BC government, along with the wealthy BC Hydro Executives, and the foreign private corporations are installing “totally unnecessary” IPPs (independent power projects) ever since Mr Doyle’s video came out, and they have failed to address any of his concerns, the fat cats all get wealthier, and we, the rate payer, lose big time!

So for exposing not only BC Hydro’s theft but that of ICBCs theft as well, and in the meantime trying to save us all a whole lot of hard earned cash, Mr Doyle was doing exactly what he was hired to do and is one of few politicians we can say that about today! He should have been rewarded greatly! But what happens to him? They fire his ass and sent him packing back to Australia… this is your tax dollars at work! What a joke democracy becomes.

No wonders the government fired Mr Doyle, he was exposing their FRAUD!

Why do we pay people to do this to us? You, your children and grandchildren’s lives have been devastated to be the bearers of the compounding debt that even some small countries do not have! And that debt, is only to turn your lights on at night, not for the rest of the ever mounting expenses we have. $3.00 for a cucumber. Need I say more?

Why does this happen? We allow it to. They are your employees and mine. Either we take the reigns and fire those at fault or it continues escalate, just as it has been for a very long time. We are bankrupt as a province, and as a nation – what are you doing about it becomes the question?

There are well over 5000 free clean energy device patents filed with the US patent office, yet corporations spend hundreds of billions every year on oil and LNG exploration, coal mining, nuclear power research and on and on – don’t you suppose just one of those billions might more useful if used to tweak any one of these devices to do what we know must be done to save our planet?

Please read on. The lecture Brian Thiesen will be giving will be his best yet, and his others have been absolutely amazing! The numbers and names of how this all went down will be exposed at this lecture, and what we can do about this will all be explained as well. If you know someone in the areas of Vernon and Kamloops that gives a rat’s ass about anything anymore, please pass this on to them, as this is only a year or two away from blowing up in your face and mine. Brian is an amazing investigative journalist and does not tow the mainstream media line at all. He can be reached via email at nobcsmartmeters@gmail.com or at his BC FREEDOM link below. If you are reading this after his speaking dates, please visit his BCFREEDOM site which is linked below.