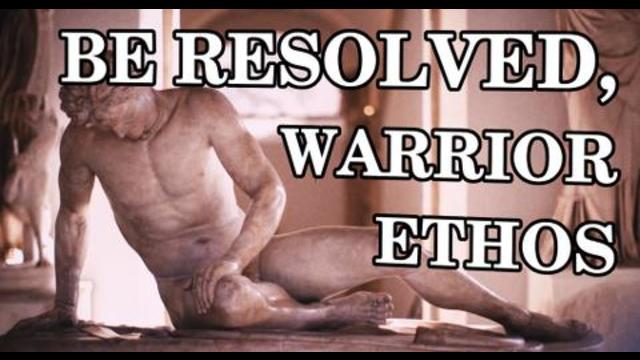 “Tell the Spartans stranger passing by, that here obedient to your laws we lie”

This simple phrase upon a hill in Thermopylae tells of the noble 300 and their adherence to the laws of their folk. Each was a warrior, who had sworn to uphold Spartan ideal and reputation. In the completion of their duty through death, they became resolved in life.

A warrior trains his body to be an instrument of war and his mind to be at peace with his final breath. By his decision, his fate becomes his craving. Thus for a warrior to be complete, he must not hide from death, but seek it. For a Spartan to fall gloriously in battle, in duty to his folk was his gift and fulfilment.

This desire to fall, to meet your fate by hand of worthy opponent was shared by all warrior societies. Harold Wartooth, was a mighty king of the North, and renowned warrior. Through his desire to meet a fitting conclusion to his noble life, he organised a battle of mythic proportion. By his command thousands gathered, Champions from all corners of the North rallied. With Dreams of Valkyrie, to die sword in hand, To shimmer golden in one bold and final action, they charged forth. In this moment, their moment, they made still the chaos of war, and silenced its drums. All their life, all its movement became refined to a single point and they became resolved.

Such was the desire, the longing, it was only by Wodens mercy that the battle was brought to an end. The Sons of the North, the sons of Gods, had proven themselves once again. Not only as warriors, but as men of purpose, who in their mastery of war had revealed the secrets of life itself.

The warrior becomes complete, because he unifies both body and mind. Once aligned, they become resolute, all movement has purpose, all thought meets active conclusion. The chaos of life, becomes an elegant dance. he watches as leaf falls when bird takes flight, as water rushes when dam breaks. All movement becomes ordered to a fixed point. The warrior in his mastery of his craft, makes certain his conclusion, that his fate is his by choice, and his alone.

In the modern age distraction plagues the mind, men become lost in an ocean of “happenings”, when nothing really is. An endless stream of distractions present themselves before him, all demanding his attention, and with no intention of his own, they consume him whole. From one vice to another he falls, all the time clinging to his petty pleasures. He begins to fear himself, even his own reflection becomes a source of shame. In his madness, the natural and good all appear to dispossess him. Locked in a battle for self preservation and pleasure, he becomes cowardly and self serving. Nothing is his fault as he becomes a victim of circumstance, hopeless and pathetic.

All thought must be followed by resolute action and all action must be supported by unwavering thought. This is true for all life, not only that of the warrior. Just as he who brings his thoughts and actions in harmony begins to dance with life, a man who cannot will be dragged along by it. He will forever be pulled by its current, unsure of his fate. His every action will be punctuated by hesitation, his every thought will be overwhelmed by doubt. He will become lost in a whirling sea of chaos, without hope.

All life, no matter how small, must obey its natural duties and believe in itself and actions enough to see them to their ultimate conclusion. A man that cannot, will never see life in its most beautiful apparition. Nature itself will become his enemy, unable to see her beauty he will see his very existence as punishment, and his life as a hopeless endeavour.

Even if you find yourself lost at sea, seize control of your ship. The Winds that torment fools, are the very same that deliver the skilled home. A storm is safer when out in open sea than close to shore. Your Life is yours, Go, believe and be certain of your course.