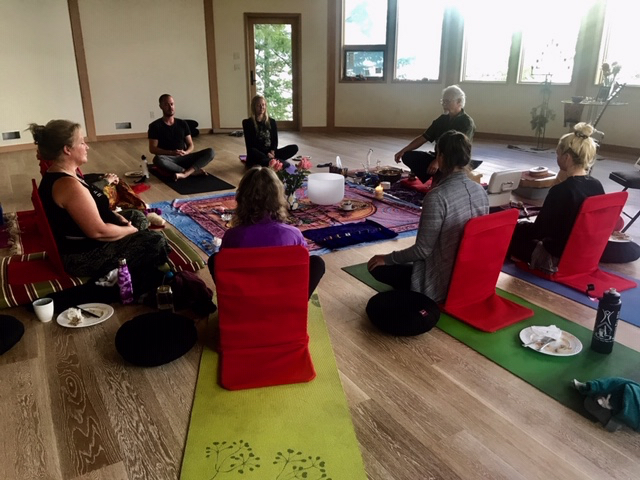 No doubt a few readers rolled their eyes at the implication of the claim in that title. If that was you, I’ll say respectfully it’s because you haven’t (yet) discovered a potential that is almost impossible to fathom until you’ve experienced it yourself. The truth is that, as an old saying from India goes, “there is a secret in these leaves.”  Unfortunately, ‘pot’ has been burdened with an undeserved, ill-informed bad rap in modern times, particularly in the last century or so.

This hasn’t always been the case—not by a long shot. The written and archaeological evidence is extensive. Along with its many other uses for everything from the materials of daily life to a multitude of medical conditions, people have known of cannabis’s potential to open up the spirit since the dawn of civilization.

We’re now seeing a rapid and widespread renaissance of recognition and application for our ancient friend and ally. But so far, this spiritual awakening potential remains its lleast acknowledged, understood, and applied capability, though fortunately this too is changing fast as increasing numbers of people discover this open secret.

The first step in explaining this bold claim for cannabis’s potential as a spiritual ally is to offer a brief description of what is meant here by spiritual awakening. Confusing words like “spiritual” aside, there is something real and ineffable at the core of all existence that almost all of us are unaware of to one degree or another. Over the course of history people have awakened to this eternal and unconditioned reality and attempted to communicate that to others.

Perhaps a useful way to understand this is to use the word “ego.”  The ego aspect within us is a story, a narrative package we’ve all constructed in an ongoing project to secure ourselves. This manufactured identity may do that, but once seen in the light of the awakened state—even if only in brief glimpses–it is recognized as a severely limited condition pervaded by at least a low-grade level of confusion, dissatisfaction, and struggle. You may not notice that when you’re on top of your game but you will when things go sideways and ego’s safe zone is challenged.

As the  wisdom guides have been telling us, awakening out of ego’s “virtual” reality involves an unraveling process of letting go of the bonds that hold us and gradually learning to trust direct perception in this moment. It’s been called primordial intelligence, free and clear from the distortions and limitations of ego’s self-protecting stories.

If you’re willing to accept these principles, at least for the moment, you might by now be asking yourself how cannabis fits into this picture. Here’s what I’ve learned from many years of working with it in a meditative way, both alone and as a ceremony leader. A handy way to think of cannabis is as a non-specific amplifier. There are bio-chemical explanations for this but I’ll mostly skip that in this short article. When it’s used with intention and attention, skill, and perhaps with good guidance in a ceremonial or therapeutic environment, the mindbody system opens up. Vasodilation and deeper breathing happen in conjunction with an increased flow of rich, freshly-oxygenated blood throughout the organism.

The resulting state is one of charged equilibrium, also described as homeostatic balance. The plant then responds to where you place your attention. Ego’s primary strategy is to cloud over the clear light of innate intelligence and wisdom with overlapping streams of thinking. Simple, follow-the-breath kinds of meditation are meant to help the practitioner acknowledge thoughts as they arise without judgment, release them, and return to full presence.

It’s in these gaps in the obscuring mind that reality can shine through. When used in this way, cannabis is not a drug, it’s a reality medicine. Its amplification capability can deepen the opening—relaxing the body, opening the heart, and even potentially inviting the seeker into a state of deep peace.

This is not speculation or hyperbole. I’ve experienced that and seen it often, and it’s what I mean in saying that cannabis is misunderstood. I hear repeatedly from people after our ceremonies that they had no idea cannabis could be this powerful. You just don’t experience that or even notice this potential if you don’t learn to quiet the mind and, as they say, “get out of your own way.”

For this kind of use, cannabis is actually an advanced spiritual medicine or practice. How many people can quiet the thinking mind for any period of time? For most of us it’s hard to do in any condition. Because cannabis amplifies, it raises the stakes and can make that surrender even more challenging. There really can be a powerful dissolution of the ego and a deep opening, although It will likely take courage and persistence to allow this opening, along with a willingness to change.

A skeptic might say, “That’s all very well, but it only lasts a couple of hours and then you’re back to where you started. You can’t rely on an external substance for awakening.” That’s true on one level, but it misses the essence. In fact, in the long term it’s not really about the high, which to some extent can even be seen as a side effect. It’s not ultimately about sensation, remarkable as that can be in the plant’s enhancing embrace. By making these temporary excursions, what we’re really doing is learning that we can relax into the moment, appreciate this moment at deepened levels, open our hearts, trust our innate intelligence, and see previously obscured truths.

In that way we’re re-training ourselves. Again, trust is key to awakening altogether. In experiencing a deepened, expanded reality—and I do mean reality—we’re learning to become more comfortable and confident with that trust. What we might discover over time is that tension and worry were counter-productive and unnecessary, and that in calming and clarifying the mind and body we become more humble, more heartfelt, more graceful, more cheerful, and more skillful and effective in our lives.

There’s a lot to learn about this “advanced spiritual medicine.” It’s not at all like taking a magic pill. It’s a developing relationship—a meeting of mind and medicine, of mind and ineffable spirit. Attitude, setting, dosage, strain (cultivar), method of intake, frequency of use, at least a tentative working grasp of what ego and egolessness are—all need to be taken into consideration for maximum benefit with the use of cannabis for spiritual healing and awakening.

Cannabis has always been and will always be “the people’s plant.” When approached with respect, intention, skill, and discipline in the context of ongoing spiritual awakening practice, our ancient friend and ally is a powerful yet humble plant “kindly bent to ease us.”

Stephen Gray is a writer, educator, ceremony leader, speaker, and plant medicine conference organizer. He is the editor and one of 18 international contributors to the popular book Cannabis and Spirituality: An Explorer’s Guide to an Ancient Plant Spirit Ally.