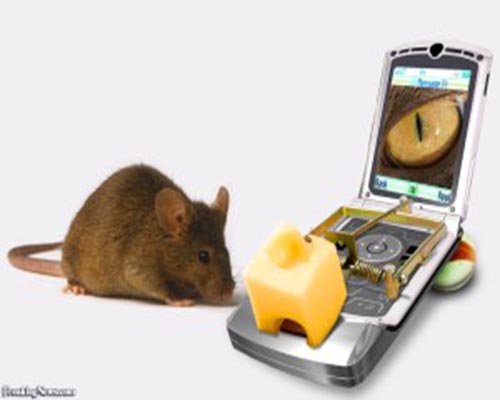 Cell phones and the Internet of Things. We are told that they are here to make our lives easier. To aid us in our quest for freedom and control of our own lives. But are we really in control, or are we the ones being controlled? Are we aiding in our own demise by allowing the creation to rule the creator, and have our creations actually become weapons of mass destruction?

We are like mice in a maze, given the illusion of freedom in nibble-sized scraps that keep us focused on remaining in the maze, never questioning if that maze is really a trap.

Driven to conform by a series of rewards and punishments, each mouse is kept in line. That is, except for the atypical mouse. Every now and then a mouse looks up from the endless maze and catches a glimpse of the handlers and will not conform as intended. These are the ones who begin to understand how the maze works and instead of blind obedience and support, go along to keep from being extinguished while searching for a door leading to the exit. A way out. They know instinctively that there is something more and will never be satisfied with the status quo. They question each command with open eyes searching for the truth, rejecting the lies.

And then there are the drones with cellphone firmly in hand, bumping into walls of self-made barriers thinking they are free. They do not want to see beyond the maze. The spirit has been sucked out of them by toxic chemicals, genetically engineered foods, brainwashing and peer-pressure to conform. They will walk through the maze dutifully memorizing every step and trampling those who get in the way of the next shiny object – treats placed in the maze to drive conformity. They are too distracted by these shiny objects to notice the strings attached. Dependent on the control grid, and unable to think for themselves, they attack others who show a spark of independence or free-thought and consider such aberrant and deviant, calling down fire and brimstone on those not like themselves. Those possessing a spark of independence and ability to see beyond the maze are thoroughly denounced. Those with any insight are attacked by these drones in an attempt to squelch the fire that burns in their bellies, using whatever weapons at hand, digging their teeth and claws into their victims in an attempt to drag them further into the maze of lies and contempt for the truth. And a bloody scene it is. The carnage is rampant and unyielding. They show no mercy because it is not in them anymore. Their nature has been changed to that of brute beast where mercy and kindness are considered traits of the stupid. They no longer know any better.

And this maze is kept in place by a myriad of rules and regulations that have become so numerous and convoluted that they in essence, create a spider web that no person can escape nor understand. This convoluted web of lies and deceit has been purposely designed to extract money from the people through intimidation and coercion using the threat of incarceration and/or monetary and property confiscation. This is entrapment, plain and simple. And it’s only getting worse by the minute. When even the simplest of things becomes so difficult to understand due to obfuscation that it cannot be understood, and agencies are set up as enforcers of those rules and regulations and tasked with collecting fines for non compliance with criminal penalties imposed as a result of this non compliance, that is entrapment. In other words, if you need to hire a lawyer to explain what should be simple stuff or go to jail, that is entrapment. A no win situation. A maze created by handlers whose sole purpose is to generate power for themselves as they control the strings, offering treats and punishments to the mice trapped in the maze.

Yet, we go along. Until one day, an escape is found. Not by the majority, but by the tireless efforts of a relentless minority that cannot and will not be content with the program. Who see the bars on the cell doors and will not stop gnawing through them to freedom. And so I say… just put the phone down and walk away, Ma’am. There is more to life than the next shiny byte.