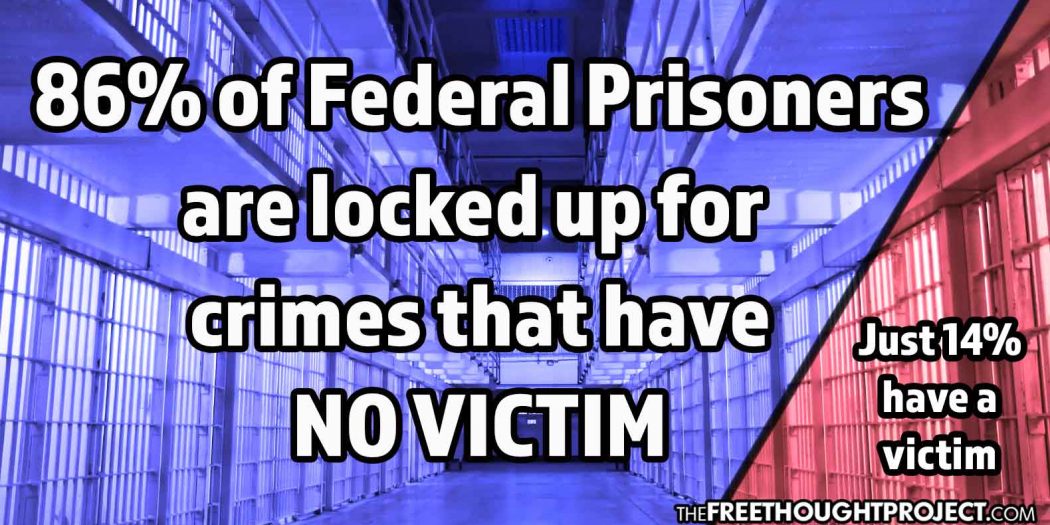 In the land of the free, 86% of the federal prison population are behind bars for victimless crimes.

Baltimore, MD — After their department gained national shame over a video showing an officer planting drugs to frame an innocent man while his fellow cops watched, the Baltimore Police Department showed the world the dark reality that is framing people to make arrests for victimless crimes in the war on drugs. Only days after the first video was released, the Baltimore Public Defender’s office released a second video that depicted “multiple officers working together to manufacture evidence.”

It was then announced that nearly three dozen people will have their charges dropped after the video of Officer Richard Pinheiro showed him planting drugs while Officers Hovhannes Simonyan and Jamal Brunson stood by and did nothing.

For decades the war on drugs ruined the lives of countless citizens in the city of Baltimore and helped to create one of the most corrupt police departments in the world because of it. But times are changing and so is the war on drugs.

State’s Attorney Marilyn Mosby recently announced the war on drugs is over in Baltimore and she is making it permanent policy to dismiss all criminal charges for the possession of drugs including heroin.

Mosby didn’t stop at drug possession either, she is also dismissing all cases for other victimless crimes like attempted drug distribution, prostitution, open containers and minor traffic offenses.

Mosby began her crusade last year when her office simply refused to keep prosecuting crimes which had no victim. Much to the dismay of the pro-police state crowd, refusing to prosecute people for victimless crimes did not lead to an uptick in criminal activity. In fact, since her policy was implemented a year ago and 1,400 victimless crimes were not prosecuted, crime went down, a lot.

Compared to this same time last year, violent crime in the city has dropped 20% while property crime fell a massive 35% compared to the same period.

“Clearly, the data suggests that there is no public safety value in prosecuting these low-level offenses,” Mosby said.

Since taking office, Mosby’s policy has led to an 80% reduction in drug arrests despite possession of marijuana, cocaine, heroin and other drugs remaining illegal in the state of Maryland.

What’s more, 911 calls for drug use, prostitution and public intoxication fell by 33% compared to the same period before this policy was enacted.

Police Commissioner Michael Harrison said that officers are now told to stop arresting people for victimless crimes like drugs or sex work. Instead of arresting them, police ask if they need help and can connect them with someone in social services or addiction treatment.

“The concept is to provide a behavioral health rather than a criminal justice response” said Edgar Wiggins, Baltimore Crisis Response Inc.’s executive director, who partners with the city to help those in need of treatment. “We have known for some time that this can be an effective way to address the underlying causes of this behavior.”

Halting the arrest of people for victimless crimes and ending the war on drugs has long been the mission of the Free Thought Project and the progress in Baltimore cannot be overstated.

Those of us who’ve been paying attention have seen who profits from this inhumane war on drugs and it’s the police state and cartels.

The reason why the drug war actually creates a drug and violence problem is simple. And those who profit most from the drug war — drug war enforcers and cartels — all know it. When the government makes certain substances illegal, it does not remove the demand. Instead, the state creates crime by pushing the sale and control of these substances into the illegal black markets. All the while, demand remains constant.

We can look at the prohibition of alcohol and the subsequent mafia crime wave that ensued as a result as an example. The year 1930, at the peak of prohibition, happened to be the deadliest year for police in American history. 300 police officers were killed, and innumerable poor people slaughtered as the state cracked down on drinkers.

Outlawing substances does not work.

Criminal gangs form to protect sales territory and supply lines. They then monopolize the control of the constant demand. Their entire operation is dependent upon police arresting people for drugs because this grants them a monopoly on their sale.

It is incredibly racist too. The illegality of drug possession and use is what keeps the low-level users and dealers in and out of the court systems, and most of these people are poor black men. As Dr. Ron Paul has pointed out, black people are more likely to receive a harsher punishment for the same drug crime as a white person.

This revolving door of creating and processing criminals fosters the phenomenon known as Recidivism. Recidivism is a fundamental concept of criminal justice that shows the tendency of those who are processed into the system and the likelihood of future criminal behavior.

The War on Drugs takes good people and turns them into criminals every single minute of every single day. The system is set up in such a way that it fans the flames of violent crime by essentially building a factory that turns out violent criminals. Baltimore is now seeing the benefits of ending such practices.

It also creates unnecessary police interactions — disproportionately carried out on black people — which leads to resentment, harassment, civil rights violations, and even death. When drugs are legal, there are far fewer doors to kick in, fines to collect, profit prisons to fill, and money to steal.

Victimless crimes other than drugs are also a major obstacle on the path toward a more free society. While most everyone in America “commits” these same victimless crimes — designed for revenue collection instead of safety — most of the people targeted by police for these crimes are the poor, minorities, and the mentally ill.

As the 2014 death of Mike Brown in Ferguson exposed, in 2013, African-Americans accounted for 86 percent of traffic stops, while making up only 63 percent of Ferguson’s population.

For those too poor to pay their tickets, routine traffic stops in Ferguson ended up with repeated imprisonment due to mounting fines. Ferguson was running a de facto debtors’ prison. Like the drug war, arrests for victimless crimes also leads to more crime by processing people into the system.

Revenue collection, persecution of the poor, and debtor’s prisons take place in every county, in every city, across every state. This institutionalized cruelty is little more than a day’s work for the millions of bureaucrats involved in the racket.

Sadly, until this system of wealth extraction is defunded or brought to a halt through radical policy changes on a massive scale, cases of cops preying on the poor will continue at an ever increasing rate until the whole country is one big prison — or, burned to the ground.

Thank you state attorney Mosby for showing the country that it is possible.

or making a one time donation at this link.