CLIMBING OFF THE BANDWAGON 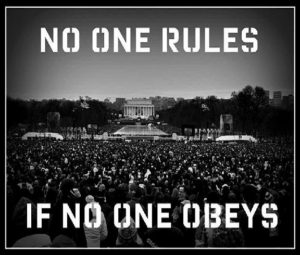 If I persuaded every anarchist in the Libertarian Party to drop out without demonstrating to them a better method of expressing anarchism, it would not be a victory. As a Voluntaryist, I not only want to convince them that politics breeds politics but to induce them to explore and implement strategies consistent with libertarianism. Because nonpolitical anarchists (excuse the redundancy) are often accused of gratuitously sniping at the L.P. without offering constructive alternatives, I want to explain why it is important for Voluntaryism, in its initial stages, to attack the L.P.

Voluntaryists observe that politics will not bring freedom any more than violence will bring peace. It is sadly necessary to stress this fact because so many anarchists have lost sight of it. Anarchists are the natural constituency, the natural recruiting ground, of Voluntaryism. It is assumed that, just as atheists reject God, anarchists reject the State, and would welcome a framework of theory and strategy aimed at delegitimizing and assaulting the system rather than working within it as the system itself encourages them to do. But anarchists-the supposed bulwark of opposition to the State-currently spend most of their time exhorting people to vote and to run for office. Those anarchists who object that no one has the right to political power, that the purpose of anarchism is to abolish the office, not merely replace the face behind the desk, are waved aside as ‘negative’ or ‘naive’. However committed these political anarchists are to a far away vision of the stateless society, from their day-to-day actions there is no way to distinguish them from any other power seekers.

As a Voluntaryist, I am in the almost comical position of telling anarchists there is something fundamentally wrong with politics, of explaining that they cannot be clear steady voices for anarchism while wearing a Clark For President button in their lapels. It is only after I present a solid theoretical case for Voluntaryism and answer objections that I can comfortably move on to the myriad of strategies which will fill the void left by electoral politics. (These strategies will be examined to an increasing degree in upcoming issues.)

Anarchists often claim to be in the L.P. simply because there is no other vehicle for libertarianism. I am suspicious of this argument for two reasons. First, the history of libertarianism and other radical movements is replete with examples of effective non-political, non-violent strategy. Anyone acquainted with the civil rights movement, the antiwar movement, Gandhianism, or the history of Nineteenth Century libertarianism cannot honestly claim there is no other way. If they are not familiar with these movements, they are speaking from ignorance and should educate themselves.

Secondly, I have too often heard the ‘no alternative’ argument used to dismiss moral objections in an off-hand manner as though morality had nothing to do with the real world. This attitude is the death of libertarianism. The strength of libertarianism is precisely what is being dismissed; namely, that it is moral and it is just and no strategic question should ever take precedence over this.

(Fortunately, there is no dichotomy between the moral and the strategic, for strategy is essential. It is the method by which one translates abstract theory into concrete action and feels the principles at work.)

But why reject politics altogether? Why not view it as simply another method within a broad framework of strategy? The obvious response is because it is inconsistent with libertarian principle, but there is another reason to emphasize the moral rejection of politics. Politics is seductive. It offers the illusion of quick, easy victory within a respectable vehicle. There is rousing campaign rhetoric, straw hat enthusiasm and the enviable advantage of an objective measure of success or failure – namely, a vote total. Anarchists who battle over an L.P. plank in a platform that even most libertarians haven’t read can go to bed feeling they have accomplished something concrete. These respectable radicals can draw on the feedback and hype accompanying electoral politics.

In contrast, many Voluntaryist strategies, such as education and non-violent resistance, are long-term and demand courage and patience without always offering an objective measure of short-term success. Voluntaryism has only two advantages: it is correct and it actually can deliver what it promises. These long-term advantages pale, however, beside the quick-kill benefits advertised by politics. Only by fully realizing that politics and politicians are a moral/strategic deadend will anarchists be induced to abandon the quick bandwagon route to liberty and settle down for the long, hard fight it is going to be.

Inevitably, the rejoinder is that politics is education.

But with what message? That libertarianism is just another political party? How can anarchists oppose the State when the crux of their message is ‘elect my man to office’? This is hypocrisy. I will oppose the claim of a libertarian to the office of senator as tenaciously as I oppose that of a democrat or a republican. Anarchists must realize that a political party cannot educate people toward anarchism; all it can do is destroy the meaning of anarchism.

I do not enjoy tearing people or institutions apart. It is because I understand the necessity of breaking the anarchist fascination with politics that The Voluntaryist editorials will repeat so often the same theme – government cannot bring freedom. Politics cannot bring anarchism. Only by convincing people of this insight will they be willing to adopt the long range strategies toward which Voluntaryism is directed.

No one said anarchism was going to be easy, only that it is right.

WE ARE NOT TAX EXEMPT

As you view our website, please remember that it is a labor of love and search for the truth. If you find anything of value here, please let us know by clicking on the Support Us button below. Your gifts to our work are not tax-deductible. Our efforts are bound by conscience and goodwill, not government regulation or political privilege. We refuse to be numbered or supervised by any government agency.    Support Us