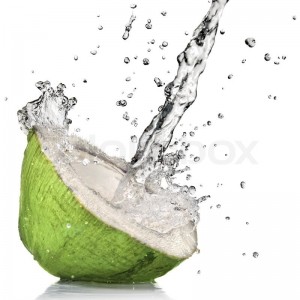 Unlike conventional drug treatments for Alzheimer’s disease, coconut oil and water may help resolve some of the root causes of neurodegenerative conditions.

Have you ever noticed that sometimes a food that nourish a particular organ often look uncannily similar to it? For instance, the walnut shell and bi-hemispheric flesh look awfully like the skull and brain it is now known to be exceptionally good for. Pomegranate fruit, the actual fruiting ovary of the plant, looks a lot like the mammalian ovary that it has been proven to support, containing relatively high levels of the actual bioidentical estrogen estrone. So too is the case with the head-like coconut, which is increasingly being looked at for preventing and/or improving brain dysfunctions such as Alzheimer’s disease (AD) due to its wide range of potentially therapeutic properties, such as:

1) Increasingly energy production in the brain by providing neurons an alternative to glucose, namely, the brain-nourishing metabolites of medium chain fatty acids known as ketone bodies.

Indeed, a growing number of cell, animal, human and population-based studies reveal that coconut consumption may provide a natural solution to a growing global epidemic that pharmaceutical drugs have been shown to do nothing to mitigate. In fact, we have discussed in previous articles how modern drug-based treatment for AD actually is more like chemical warfare than a therapeutic intervention.

One reason why conventional interventions are so ineffective is that the brain is highly protected against the entry of chemicals due to the brain-blood-barrier (BBB), with most small molecule drugs and virtually all large molecule drugs incapable of gaining entry to the brain because of it. Even naturally occurring biomolecules such as fats have a hard time penetrating directly through the BBB. Coconut may be an exception to this rule, as it has copious amounts of the medium chain triglyceride known as caprylic acid, which preliminary research indicates is able to pass through the BBB and which has been demonstrated to possess  anti-convulsive and neuroprotective properties in the animal model.[1]

We have reported previously on coconut oil and Alzheimer’s research, but it appears another coconut product: coconut water, which contains no fatty acids of physiological relevance, may also have great value for those suffering with Alzheimer’s disease.

Coconut water is one of nature’s best forms of hydration due to its isotonic properties (it is able to pass through cell membranes easily). And while the focus on brain health has been primarily on brain structures, e.g. neurons, brain plaque, etc., little focus has been on the role of water in brain health, and particularly dehydration as a factor in chronic neurodegeneration illness. Coconut water may help to restore hydration to the brain, and considering thediscovery of a 4th phase of water known as EZ by Gerald Pollack which acts like a battery by absorbing the energy of sunlight, this increased hydration of the brain may also translate to increased energy production in those tissues and associated improvements in cognition.

First, coconut water contains a range of essential biomolecules needed for health, including vitamins, minerals, antioxidants, amino acids, enzymes, growth factors and other nutrients which have yet to be fully characterized.

Second, one of the more promising classes of phytocompounds in coconut water (and related plants) is known as cytokinins. These plant hormones modulate plant cell division and are believed to have anti-aging properties. One cytokinin known as trans-zeatin has been investigated as a possible new treatment for neuronal diseases including Alzheimer’s disease. According to a recent review on coconut’s value in Alzheimer’s disease, trans-zeatin is capable of preventing the brain cell damaging properties of amyloid beta brain plaque and related impairments in memory:

“Zeatin has demonstrated antioxidant and cell protective effects against Ab-induced neurotoxicity in cultures of neuronal PC12 cells, and in experiments of mice treated with scopolamine to induce amnesia, pretreatment of the mice with zeatin caused a reduction in the level of induced amnesia, according to the passive avoidance test and Y maze test(165)[2]. Interestingly, another study has found that trans-zeatin could inhibit acetylcholinesterase (166,167)[3][4]. This indicates that cytokinin could have therapeutic value, as levels of the neurotransmitter acetylcholine are reduced in AD, and acetylcholinesterase inhibitors are currently used to ameliorate the symptoms of AD.”

The enzyme acetylcholinersterase is the target of most AD drugs, because when this enzyme is inhibited it increases the duration of activity for the neurotransmitter acetylcholine, which in Alzheimer’s patients is believed to impaired or deficient.

“Coconut water has also been shown to have beneficial effects on serum and tissue lipid parameters, when given to rats concurrently fed a high-cholesterol containing diet(168).[5] Another study has investigated the positive effect of regular consumption of two tropical food drinks, coconut (C. nucifera) water and mauby (Colubrina arborescens), on the control of hypertension(169).[6] The combined products were found to be almost twice as effective as the products in isolation.”

If you have followed my previous writing on coconut water it is no secret to you that I am quite smitten with coconut water. In a previous article, “Coconut Water: More Than Just A Refreshing Beverage,” I broke down the multitude of health benefits it has been studied to possess. Despite these scientifically validated health properties, a common concern is coconut water’s sugar content. And yet, despite coconut water’s sweet taste and not insignificant simple sugar content it has actually been studied to have significant anti-diabetic properties.[7][8] Also, take a look at this study showing that coconut water may outperform a blockbuster statin drug[9] for improving blood lipid profiles.  Because statin drugs are well known diabetogenic agents, coconut’s potential role in substituting for statin drugs may actually make it a powerful contributor to reducing iatrogenic, drug-caused diabetes.

Ultimately, I believe a compelling pattern of evidence points to the use of coconut oil and water as a therapeutic agent in the prevention and treatment of neurodegenerative diseases. To learn more about how alternative fuel sources such as fatty acids may benefit brain health read “Sugar and Your Brain: Is Alzheimer’s Disease Actually Type 3 Diabetes?” To explore a rich database of research on natural interventions for Alzheimer’s disease view our section dedicated to the topic here: Alzheimer’s disease research.