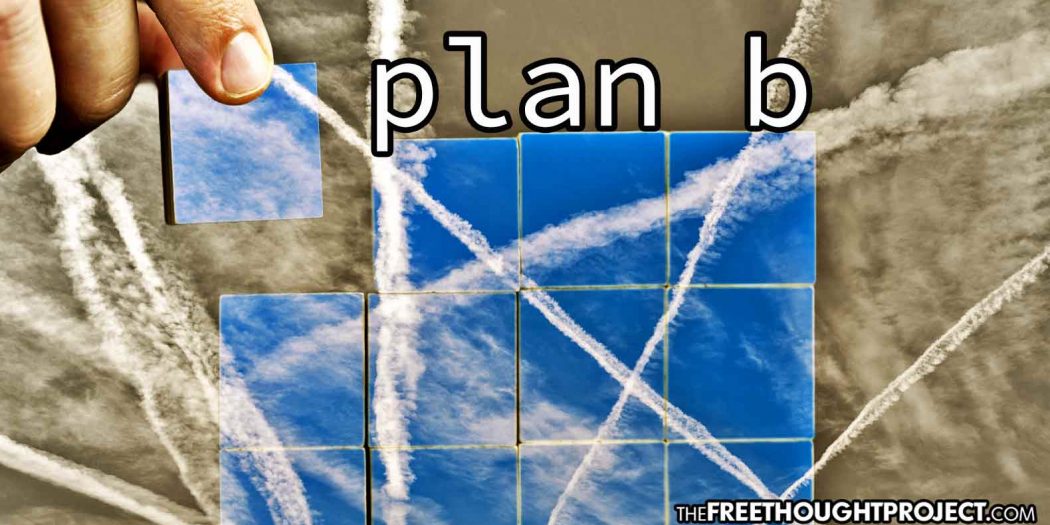 It was reported this month that the top climate change scientist for the National Oceanic and Atmospheric Administration has received $4 million in funding from Congress along with permission to study two highly controversial geoengineering methods in an attempt to cool the Earth. According to Science Magazine, David Fahey, director of the Chemical Sciences Division of NOAA’s Earth System Research Laboratory, told his staff last week that the federal government is ready to examine the science behind “geoengineering”—or what he dubbed a “Plan B” for climate change.

What could possibly go wrong?

Before we go any further, it is important to point out to new readers that we are not a satire site. We are not a conspiracy theory site. The information you are about to read is factually accurate and 100% real despite the ostensible ‘skeptics’ who claim otherwise.

Over the past several years, the “conspiracy theory” of spraying particles into the sky to cool the Earth has become more mainstream. It came to a head last year when CNBC put out a videotitled How Bill Gates-Funded Solar Geoengineering Could Help End Climate Change.

The video is nothing short of an infomercial for chemtrails. It is truly bizarre how this subject has moved from the fringes of conspiracy circles and into the mainstream and no one is even batting an eye. Now that Bill Gates has endorsed and funded it, the world is suddenly open to the idea of attempting to modify the planet’s weather by spraying chemicals into the atmosphere to block out the sun.

Now, the government is throwing their hat into the mix as well. This “Plan B” approach is two-pronged, according to NOAA.

One is to inject sulfur dioxide or a similar aerosol into the stratosphere to help shade the Earth from more intense sunlight. It is patterned after a natural solution: volcanic eruptions, which have been found to cool the Earth by emitting huge clouds of sulfur dioxide.

The second approach would use an aerosol of sea salt particles to improve the ability of low-lying clouds over the ocean to act as shade.

The Free Thought Project has reported on the first method before when Harvard scientists began talking about doing it. Harvard scientists announced that they will attempt to replicate the climate-cooling effect of volcanic eruptions with a world-first solar geoengineering experiment, last year. The university announced in July of 2019 that it has created an external advisory panel to examine the potential ethical, environmental and geopolitical impacts of this geoengineering project, which has been developed by the university’s researchers.

Known as the Stratospheric Controlled Perturbation Experiment (SCoPEx), the experiment will spray calcium carbonate particles high above the earth to mimic the effects of volcanic ash blocking out the sun to produce a cooling effect. This appears to be the same as NOAA’s “Plan B.”

Naturally, there are many critics of geoengineering.

The idea of geoengineering the planet has become so controversial that the government will soon be referring to it by a different name in a likely attempt to distract. Fahey recommended changing the nomenclature from geoengineering to “climate intervention,” which he described as a “more neutral word.”

As not to be too controversial, however, Fahey emphasized that this is not an approval to begin geoengineering. Rather, it is a move by the US to prepare for the possibility that it may do this one day.

“Geoengineering is this tangled ball of issues and science is only one of them,” he said.

“One of the things I’m interested in doing is let’s separate the science out,” he added. The idea is to give policymakers a clear view of how a hurry-up bid to save the planet would work.

This type of talk is concerning to many people, including environmental groups, who say such efforts are a dangerous distraction from addressing the only permanent solution to climate change: reducing greenhouse-gas emissions.

The idea of injecting particles into the atmosphere to cool the earth also seems outright futile considering what scientists are trying to mimic—volcanic eruptions. If we look at the second largest eruption of the 20th century, Mount Pinatubo, which erupted in the Philippines in 1991, it injected 20 million tons of sulfur dioxide aerosols into the stratosphere. Scientists from the USGS estimated that this 20 million tons only lowered the temperature of the planet by about 1°F (0.5°C) and this only lasted a year because the particles eventually fell to back to Earth.

While this talk of geoengineering may sound like something out of a dystopian science fiction movie, the reality is that it has long been on the table of governments and think tanks from around the world. In fact, just last November, a study published in Environmental Research Letters, talked about doing the exact same thing—geoengineering and planes spraying particulates into the atmosphere to curb global warming.

What’s more, that study echoed the sentiments of then-CIA director John Brennan when he addressed the Council on Foreign Relations in 2016, detailing a similar process of spraying chemical particulates in the atmosphere to cool the planet.

At the meeting, Brennan addressed instability and transnational threats to global security at a meeting with the Council on Foreign Relations. During his long-winded talk of threats to US interests and how the largely CIA-created ISIL threat is impacting the world, Brennan brought up the topic of geoengineering.

Another example is the array of technologies—often referred to collectively as geoengineering—that potentially could help reverse the warming effects of global climate change. One that has gained my personal attention is stratospheric aerosol injection, or SAI, a method of seeding the stratosphere with particles that can help reflect the sun’s heat, in much the same way that volcanic eruptions do.

Brennan went on to echo the calls from some scientists who have called for aerial spraying.

Again, this is not some conspiracy theory. Watch him say all of this in the video below starting at the 12:05 marker.

The extent to which Brennan talked about stratospheric aerosol injection shows that he and the CIA have likely been considering this for some time.

Although we are hearing more and more talk about geoengineering, it has been around for a very long time and not just in the realm of conspiracy theories. In fact, scientists have already suggested that it could be going on right now, unintentionally.

Researchers with NOAA previously suggested that contrails from airplanes may be inadvertently geoengineering the skies.

Chuck Long is a researcher with the Cooperative Institute for Research in Environmental Sciences (CIRES) at the NOAA Earth System Research Laboratory at the University of Colorado in Boulder. At the American Geophysical Union Fall Meeting in 2015, Long and his team released their paper, “Evidence of Clear-Sky Daylight Whitening: Are we already conducting geoengineering?” The analysis found that vapor from airplanes may be altering the climate through accidental geoengineering.

To be clear, no one here is claiming to be an expert on climate change or the effects of geoengineering. But one thing is clear and it’s the fact that there is still much to be debated and learned before humans deliberately begin altering Earth’s climate. Aside from doing nothing to curb carbon emissions, if we are so quick to jump on this method, it could set off a chain reaction that could prove to be catastrophic.

Please share this article with your friends and family so that they may see what’s being planned for their future.