Study: Humans Can Communicate From Brain To Brain (Telepathy) 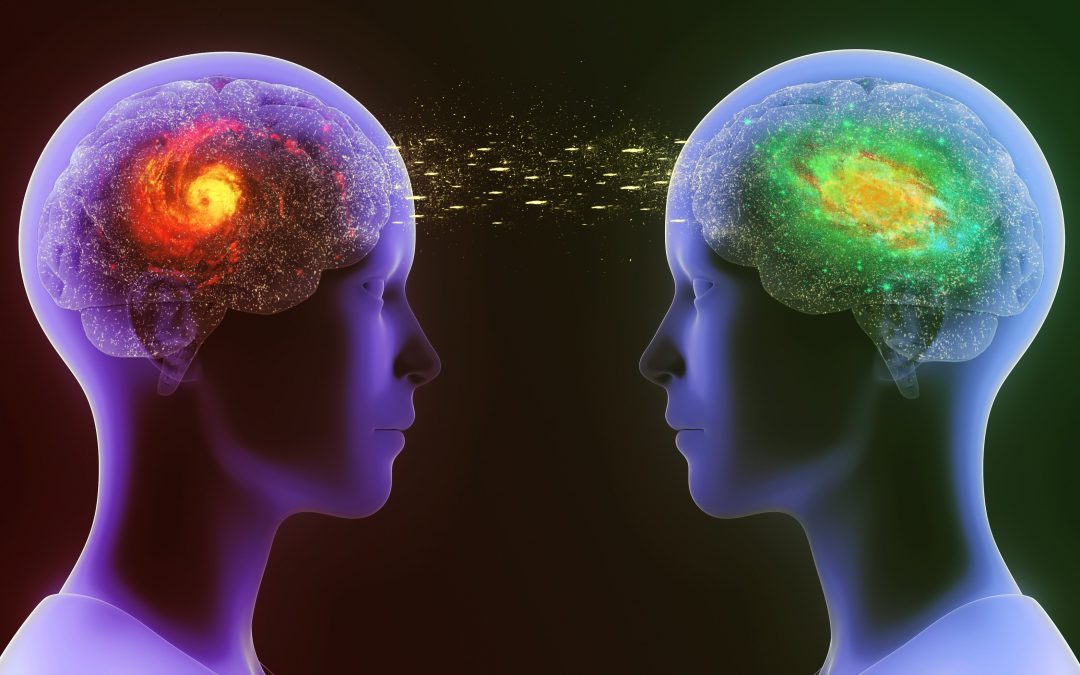 Study: Humans Can Communicate From Brain To Brain (Telepathy)

Fascinating research out of the University of Washington successfully replicates a direct brain-to-brain connection between multiple pairs of people in a scientific study, following-up on the teams initial demonstration.

The study involved six people who were engaged with each other in pairs from different areas of campus. Researchers sent signals from one person’s brain over the internet to another person in an attempt to control the other’s hand motions with thought.

In order to properly conduct the study researchers needed to separate the subjects and close off certain perceptions of the study method. Each sender of thought was placed in front of a computer game where he or she had to defend a city by firing a cannon and intercepting rockets launched by a pirate ship. But, the senders were not able to interact with the game physically. The only way they could properly defend their city was through thought. When a rocket was coming or when they wanted to fire a cannon, they had to think about doing that intentionally.

Across campus, each receiver sat in a dark room with headphones on and no ability to see the computer game. Their right hand was positioned overtop the touchpad that would fire the cannon when tapped. If brain-to-brain connection was successful between the two pairs, the send would effectively be able to get the receiver to tap the touchpad and fire the cannon.

From a technology standpoint, researchers used two types of noninvasive instruments that can connect with human brains in real-time. One participant was hooked up to a electroencephalography machine that reads brain activity and sends electrical pulses via the web to the receiver. The receiver is wearing a swim cap with a transcranial magnetic stimulation coil placed near the area of the brain that controls hand movements.

This setup effectively allows one person to send a command that would in theory move the hand of another person simply through thought.

“The new study brings our brain-to-brain interfacing paradigm from an initial demonstration to something that is closer to a deliverable technology,” said co-author Andrea Stocco, a research assistant professor of psychology and a researcher at UW’s Institute for Learning & Brain Sciences. “Now we have replicated our methods and know that they can work reliably with walk-in participants.”

UW students Darby Losey, left, and Jose Ceballos are positioned in two different buildings on campus as they would be during a brain-to-brain interface demonstration. The sender, left, thinks about firing a cannon at various points throughout a computer game. That signal is sent over the Web directly to the brain of the receiver, right, whose hand hits a touchpad to fire the cannon.Credit Mary Levin.

It was found that accuracy varied depending on each pairing. The accuracy range was from 25 to 83 percent. Misses were mostly found to be caused by the sender failing to accurately execute the thought to send the “fire” command. The researchers also were able to quantify the exact amount of information that was transferred between the two brains.

Interestingly the degree of accuracy being low in subjects who couldn’t properly extend intention to the receiver also indicates that it isn’y simply just thoughts that affect our reality but actually the intention. Therefore during study of the phenomenon accuracy in whether or not subjects are truly intending vs just thinking is crucial.

For me personally, this brings interesting insight to my theory that thoughts don’t create reality, but that there needs to be a power behind that thought. A strong intention, emotion, feeling, etc. Further to that, it takes deep practice and a level of mastery to truly train yourself to impact physical reality with thought and intention.

This isn’t the first time brain-to-brain communication has been demonstrated scientifically. Another research team from the company Starlab in Barcelona, Spain, recently published a study with very similar results to the one above. Direct communication between two human brains was demonstrated but this one only featured two subjects.

Also, a study was done that demonstrated telepathy between humans during dreams.

The research team from the University of Washington has been granted a new $1 million grant from the W.M. Keck Foundation so they can take their work to the next level. This clearly illustrates the validity and impressive potential implications of their work.

“Imagine someone who’s a brilliant scientist but not a brilliant teacher. Complex knowledge is hard to explain – we’re limited by language,” said co-author Chantel Prat, a faculty member at the Institute for Learning & Brain Sciences and a UW assistant professor of psychology.

It feels like we are living in a time where new discoveries are truly making us question what it means to e human. Who are we? What are our capabilities? If the story of who we truly are changes, would that change how we choose to create our society and life?

Thankfully there are many brilliant people out there not only doing this work to bring forth cutting edge science. Of course this new science does come with opposition and controversy as paradigms are challenged by these ideas. It’s my feeling that there is little value in simply calling this work “pseudoscience” as it often is called, as it only seeks to cast off this work without truly looking into it and remembering to stay curious and playful.

“The day science begins to study non-physical phenomena, it will make more progress in one decade than in all the previous centuries of its existence.” – Nikola Tesla