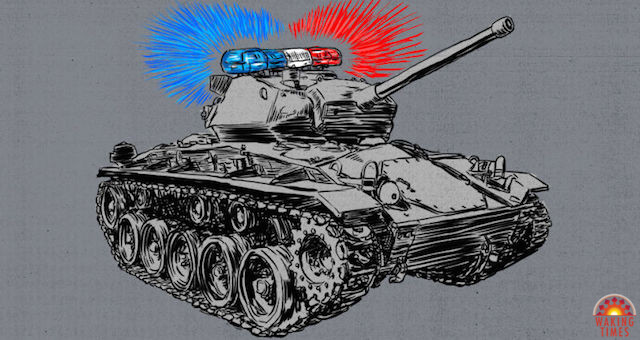 “Restlessness and discontent are the first necessities of progress.” ~Thomas Edison

The restlessness and discontent evident in the streets comes down to a mis-balance in power that the people are slowly becoming aware of. This gross mis-balance is due to an overreaching state with the monopoly on force, the monopoly on violence, and thus the monopoly on power. And although most people are looking at the top of the authoritarian state for change, they should be looking at the bottom, where the authoritarian state begins its diabolical overreach through a poorly trained, militarized police force made up of individual cops given more power than God, acting as judge, jury, and executioner in the streets. It’s the height of insanity, and yet the vast majority of people just shrug their sheep-like shoulders and say things like, “It’s just the way things are.”

Here’s the thing: the offense minded, militarized condition of the police is a huge problem. It forces the everyday citizen into a defensive position against an offensive state. Hence the restlessness and discontent. The solution is not more ill-trained offense-minded police with too much power, but more well-trained defense-minded police with just enough power (a power with built-in checks and balances in place to prevent power from corrupting).

The militarization of the police is one of the greatest tragedies of our time. But such militarization is a secondary problem, and probably a side effect of the primary problem: offense-minded policing. What is offense-minded policing? It’s when a police force hired by any given entity goes beyond mere defense of the hired entity and resorts to offensive overreach into the everyday lives of otherwise free human beings – free people who may or may not even agree with the hiring entity’s values to begin with. It’s the type of policing that is aggressively forced onto its citizens by threat of violence. Such policing is less concerned with protection and more concerned with control.

It is offense-minded in the sense that it will go out of its way to enforce petty, outdated, and unjust laws merely to achieve a certain quota that lends itself to a “legal” extortion racket which tends to make the poor poorer and the rich richer. Simply put: it is oppressive. Offense-minded policing is a slippery slope titled “Police State” which can easily lead to tyranny.

The biggest problem with an offense-minded police state is the threat of violence forced upon non-violent citizens. The use of violence to defend the self (or the hiring entity) against violence can be moral, but the use of violence to enforce the values of the self (or hiring entity) onto non-violence, free human beings is immoral. This is the crux of the matter. This is the fly in the ointment of the police state. This is where statism utterly fails. Not only does it break the non-aggression principal, it breaks the Golden Rule while also defying common sense, logic, and reasoning. All in one fell swoop.

The tendency within such police states is for the majority of its citizens to be culturally conditioned and brainwashed through rampant statist propaganda, into believing that such offense-minded, extorting, overreaching and violent policing is perfectly okay. They are caught in a psychological double-bind, a catch 22 of monumental proportions. These state-driven delusions carry with them extreme consequences in the real world. Consequences like ridiculously high numbers of police acting as criminals, as well as the highest incarceration rates (in for-profit prisons, mind you) per capita in the history of the human race. Offense-minded policed statism is the tragedy of our times; as bad, if not worse, than slavery, the tragedy of our previous era. But just as we were able to evolve past slavery (or at least hard-slavery anyway), we should be able to evolve past statism. We just need a little imagination.

“The most useful piece of learning for the uses of life is to unlearn what is untrue.” ~Antisthenes

Defense-minded policing works well within both statist and anarchist circles. Which makes it a superb tool that we can use to leverage our progressive evolution through, and eventually out of, the outdated, unsustainable, and untenable system of statism. Defense-minded policing within the system of statism can work well for people as long as the state, and the police who defend the state, stick to defense and do not slip into offensive overreach. That means the police act more like what statists are used to fire fighters acting like. Barring the necessity of defensive security, if police simply acted as a defense against violence, as fire fighters act as a defense against fire, it would go a long way toward, not only demilitarizing the state, but preventing unnecessary police violence and oppression. It’s a far cry from a state-less defense-minded policing system, but it’s much better than a militarized police state.

So what would a state-less defense-minded policing system look like? Simple: for any free human being who is unable to protect themselves or their property, whether due to lack of skills, an ailment, age, or even cowardice, they are free to hire a defense-minded policeman or police force to help protect them and their property. As long as their police force doesn’t become offense-minded, by forcing their values and ideals and rules onto others, then it can work. It’s only when the hired police force violates defense-mindedness by becoming an oppressive, extorting, violence force with the monopoly on power when it ceases to work well for free people. It really is that simple.

At the end of the day, too few people are able to use logic and reason to think their way out of the cognitive-dissonance-infused conundrum of statist conditioning that has them believing (blindly even) that offense-minded, oppressive, extorting, and violent policing is “just the way things are.” But it doesn’t have to be the way things are. If enough people can rise up, question the system, and then be proactive about thinking through their own cognitive dissonance, then we can begin the difficult journey into progressive evolution that leads away from the outdated system of police enforced statism. There are many tools which we can use along the way, we just need to become aware of the reasons for using them in the first place.

As Rumi wisely said, “Some people pick up their tools, others become the making itself.”

“Fallen Soldier”- The tyrannical tentacle of the state continues to hold one of our own. Gary Z McGee remains in jail for the petty offense of not pulling over quickly enough. It has been 4 months since his arrest, and still he has not had his day in court. Gary remains behind bars, guilty until proven innocent. He faces 2 to 15 years in prison if convicted. He is charged with evading arrest, and endangering a minor, because his son happened to be in the car while he was being pulled over. To release him on bail, $1700 is needed. Any donation is greatly appreciated. Let’s come together to help free this free-thinker. If you enjoy his words, and would like to contribute to his freedom…donations can be sent to his paypal account: mcgeezfund@gmail.com

This article (Counter-Cop – On the Evolution of Policing) was originally created and published by Waking Times and is printed here under a Creative Commons license with attribution to Gary ‘Z’ McGee and WakingTimes.com. It may be re-posted freely with proper attribution, author bio, and this statement of copyright.