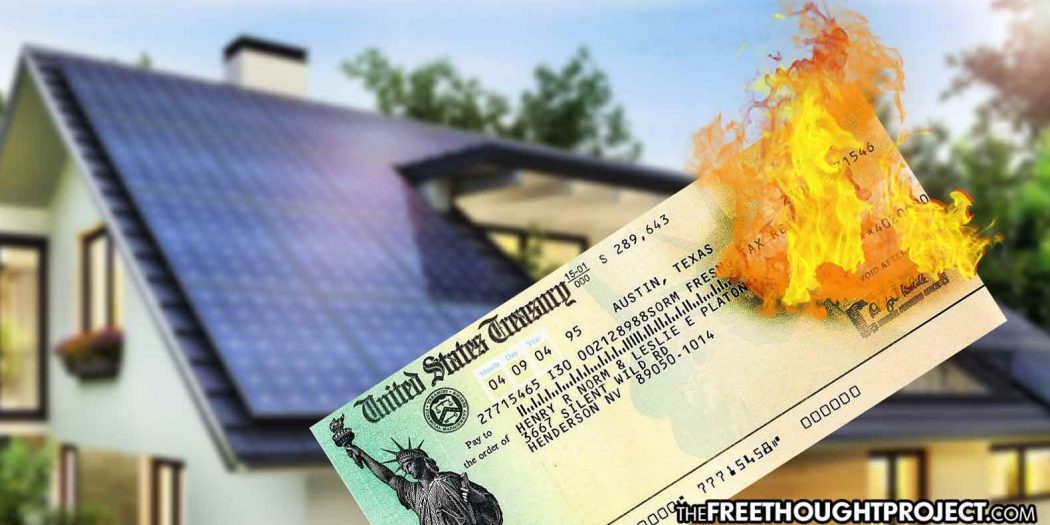 It is now April 2021 — thirteen months into “two weeks to flatten the curve.” Since March of last year, Americans and the world alike have watched from the sidelines as power hungry politicians have ushered in draconian lockdowns, shutdowns, police state measures, and brought the economy to its knees. While governments around the planet used their central banks to devalue their currencies by printing money to fund their tyranny, the US led the way down this road fiscal horror.

Here we are, over a year later and thousands of businesses have closed down forever, many states continuing to refuse to reopen schools, tyrannical policies still implemented from coast to coast and we’ve added over $6 TRILLION to the national debt in the name of COVID-19 “relief.”

To put this number into context, the COVID spending over the last year is at least eight times larger than the price tag of President Franklin Delano Roosevelt’s “New Deal.”

Government spending has reached historical levels and the already-unsustainable nature of such irresponsible fiscal policy has been fast tracked to complete meltdown. So, last month, the feds announced they are coming after more of your paycheck.

Someone has to pay the piper for the $6 trillion, right? Also, where, exactly, did all that money go? It certainly did not go out to Americans who needed it most.

For the same $6 trillion in expenditure, the government could have given every federal taxpayer a $41,870 check. Or, to think about it a bit differently, it could have written every American roughly an $18,181 check.

Or, as Congressman Thomas Massie put it, it could have put solar rooftops on every household in America and “the United States could be running on solar panels… for the rest of our lifetimes.” 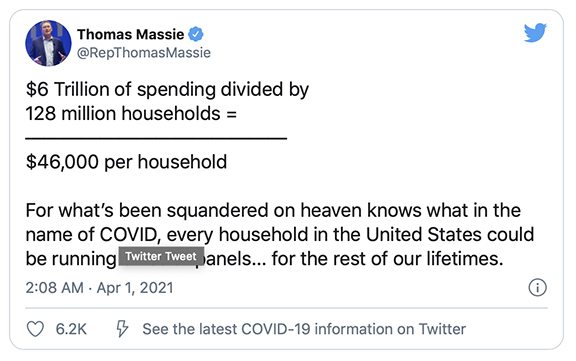 Obviously there would be a lot of logistics involved in such a venture, but it goes to show just how bloated and wasteful US government’s COVID spending is. For almost all Americans, the actual benefits of the multiple pieces of lengthy stimulus legislation come in far below the figure that they would have received if the entire pile of money was just even split up and sent out.

But this was entirely predictable as US concerns lie not in the American people, but in special interests and the military industrial complex who keep them in power.

Want proof? In February, instead of helping the American people, President Joe Biden launched an airstrike in Syria. Like Trump before him, Biden carried out this act of war with absolutely zero Congressional approval and, according to several sources, without evidence.

Biden promised to forgive student loans, hand out $2,000 stimulus checks, raise minimum wage, get the kids out of cages, and help America heal after four years of Orange man bad. Instead, however, he is continuing the wars in the Middle East, bolstering the police state, and giving billions to the military industrial complex. Oh, and kids are still in cages.

As Brad Polumbo writes at FEE, this spending is not without consequence either.

There’s no such thing as a free lunch, and, much to the chagrin of spend-happy politicians’, Santa Claus is not real. Government spending doesn’t create wealth; it only transfers wealth, generally destroying a lot of it in the process.

So, unless Americans are actually seeing equal or greater benefit from spending compared to its cost, it’s a raw deal for taxpayers. And for the federal government’s “COVID” spending binge, it’s not even close.

Unfortunately, the masses are so easily distracted and manipulated into fearing whatever boogieman the state throws at them like COVID, the ‘insurrection’, Antifa, defunding the police, or Trump 2024, that they don’t even notice what’s happening. This fear and distraction, in turn, feeds the budgets of the military industrial complex while laying waste to human rights — both abroad and domestically.

So, no, there will be no solar rooftops. Instead, the masses will continue to argue over irrelevant partisan talking points fed to them from their rulers until there is no more value to steal and the dollar is but a fleeting memory.