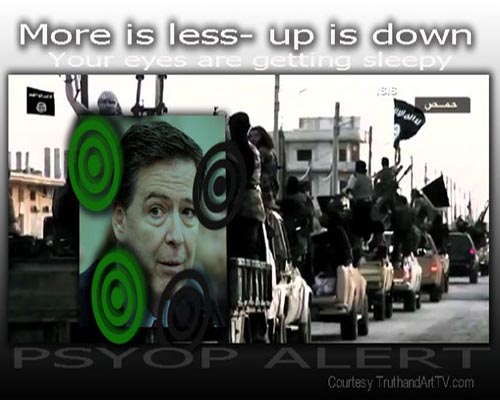 The now wrapped Democratic National Convention proved to be an ugly circus of lies, deceit,betrayal, censorship, issue-dodging, finger-pointing, name-calling, propaganda, fake speeches, snappy quotes and cliques, you name it. It was an ugly moment in American history of course. Anyone paying attention and anyone who sees what I see knows we are watching history unfold before our very eyes because we are watching the official attempt (by the ruling elite) to transform America, once and for all, into a broken and depopulated dangerous wasteland of slaves living in fear and ruled by evil overlords. Following seven and half years of Obama it feels like we’re already there, but unfortunately, as many of us suspect, it CAN get much worse and that’s where Hillary comes into the picture. Yes, Obama has been a good slave for the West’s ruling elites’ new world order agenda, but now it’s Hillary’s turn to take all of Obama’s tyrannical efforts to the next level. We know this and they (the oligarchs fighting for the throne) know this as well.

We can all feel it even if we can’t all articulate what we see unfolding before our very eyes. Hillary seems to already be quietly in charge. Just look at the death trail she’s leaving behind … and she’s not even president yet. Think about this. Okay perhaps Hillary is not yet “officially” in charge but she is now (without officially being crowned president) officially above the law as proven by the words told to us by FBI Director James Comey. Given what we now know, we need to all recognize the plans of the Western cabal unfolding before our very eyes. There are a lot of parts to this plan but today we turn our attention to Comey who just a few weeks ago (July 2016) officially declared Hillary above the law. We can appreciate with our own eyes that Comey is an obedient stooge for the new world order oligarchs, and what he recently declared is a clear confirmation of this.

In perfect timing coinciding with the end of the DNC the smell of “terrorism” is already in the air thanks to Comey himself. Acting as if he was just handed his first assignment in the post ‘Hillary-is-above-the-law-and-will-soon-be-your-boss’ era, Comey, like a good little stooge, is suddenly announcing that because ISIS is failing, dying and slowly being eliminated in Syria and surrounding regions that (get this) this means that MORE (not less!) ISIS terrorism is coming to America, Europe and around the world! Talk about a psyop statement! It doesn’t get any worse than this.

Additionally, working in perfect timing with the Comey’s psyop comments, CNN released an entire report (similar tothis psyop report I exposed over a year ago) built around a 22-year-old angry “pro-ISIS” “terrorist,” Abu-Rayyon, who is apparently very willing to make his “pro-ISIS” and “pro-terrorist” comments available for everyone to read on social media. So while the good people of America are being ambushed with that psyop report here comes Comey with what can only be described as “new world order” logic :

Speaking to a cybersecurity conference at Fordham University Wednesday, Comey predicted that eventually crushing ISIS in its self-proclaimed caliphate in Syria and Iraq will likely result in dispersing terrorists elsewhere.

“At some point there is going to be a terrorist diaspora out of Syria like we’ve never seen before,” Comey said. “Not all of the Islamic State killers are going to die on the battlefield.”

The FBI director’s warning that the collapse of the caliphate will mean increased attacks in Western Europe and the United States mirrors a consensus among intelligence officials.

Comey compared it to the formation of al Qaeda, which drew from fighters who had been hardened and radicalized fighting the Soviet Union in Afghanistan in the 1980s and early 1990s.

“This is an order of magnitude greater than anything we’ve seen before” Comey said. “A lot of terrorists fled out of Afghanistan… this is 10 times that or more

Now let’s review. Defeating ISIS means MORE terrorism because they are “angry” that they have been defeated? So then what is the best option? Not defeating them? This is like the old saying – “heads I win tails you lose!” This is exactly what the oligarchs are saying! Anyone who has done their research knows the West operates in the Middle East via their proxy (paid for) sectarian armies like ISIS, al-Nusra, “moderate rebels,” al-Qaeda or whatever else you want to call them. These groups are all part of the West’s strategy of tension to break up countries that don’t cooperate with the West. Alternative and worldwide media not included in the tiny information bottleneck known as Western mainstream media has been covering this for years now. Even Russian President Putin has repeatedly stated and has warned the world about who created ISIS. James Comey, his new boss Hillary and the rest of the treasonous criminal elite in charge hope that you are still confused about who ISIS works for and who created them.

According to his latest psyop statements Comey is implying that if we want to see “less” terrorism in Europe, America and around the world we need to somehow allow ISIS to exist and respect their existence, might and greatness. This is exactly what Comey is implying! Nothing Comey says should surprise us any longer. He is clearly a mouthpiece and new point-man assigned to oversee what they hope will be the transition to the new global rule beginning in January 2017 if not sooner with an event that will justify Continuity of Government or worse.

The ruling elite are clearly going for it all, and now is the time to educate everyone you know and remind them who created ISIS and what ISIS really is. ISIS is a US Intelligence (CIA-Mossad) operation with support from Saudi Arabia and neighboring countries (Jordan, Qatar) where the fighters have been conveniently armed and trained just prior to officially joining ISIS. ISIS even drives around in Texas-made pick-up trucks and has been given massive caches of US made weapons via Nouri al-Maliki’s Iraq (Mosul and Ramadi) if not directly from the US via the “moderate rebels” and “redirection” strategy in Syria and surrounding regions.

Hillary, Comey and the rest of the traitors know the following very clear – no ISIS means no new world order. This is a topic I’ve been covering for some time now. Also, ISIS is the best tool they can come up with to keep the people in fear. The ruling elite are afraid that you won’t be afraid. They know that once you shed the fear and don’t react to psyop announcements like the one Comey is putting out here it’s game over for them. Nothing threatens the new world order more than masses of clear thinking unafraid people who have had enough of the corruption. Can you imagine this?

This latest ISIS psyop scare tactic is just a continuation of the ISIS propaganda campaign that launched in 2014. Back then they were telling us every day how great and unbeatable ISIS was and it’s no different now. Beware of this running theme to make ISIS seem greater than life. Imagine if during WW2 President Roosevelt announced we can’t defeat Germany because if we do they will attack everyone even more. In this Orwellian new world order logic being helpless, defeated and small makes you more powerful and more dangerous because you are angry and isolated. This is extremely distorted new world order newspeak psyop logic. Wrong. When you are defeated you are arrested, jailed, executed, disarmed, rejected by society and left for dead. You do not become MORE of a danger, stronger and somehow more armed and organized. The bottom line is that the US war machine needs their imaginary enemies to seem entirely indestructible and with eternal god-like powers.

Solutions: What can stop an idea?

Clearly we are living in historic times and none of us know how this will end. I want to share with readers a few thoughts. One of the driving forces for the (Luciferian) ruling elite gangsters is the need to control. This need to control and impose their will on all of nature and all of humanity is driven by their own fear of death and demise. They are afraid because they don’t have anything to believe in. They don’t have love, compassion, care, joy or any of the characteristics that make us human. When all is said and done then we need only to reject fear and act with wisdom in all we do. None of us can control the future but the ideas we share can actually change the future. This article and the work of many truth seekers are examples of sharing the information and ideas.

In the end it’s ideas that change the world and no amount of “terrorism”, false flags and staged psyop events to scare you into giving up more freedoms will ever stop us from sharing and spreading our ideas. They know this and so should we. The critical question then is, what can stop an idea? What can stop an idea that makes sense and is good for all of humanity? Nothing can! This is true because more and more people are waking up to the corruption and lies we are seeing every day and they can see for themselves that something is very wrong.

Bernie is a revolutionary writer with a background in medicine, psychology, and information technology. He is the author of The Art of Overcoming the New World Order and has written numerous articles over the years about freedom, government corruption and conspiracies, and solutions. A former host of the 9/11 Freefall radio show, Bernie is also the creator of the Truth and Art TV project where he shares articles and videos about issues that raise our consciousness and offer solutions to our current problems. His efforts are designed to encourage others to joyfully stand for truth, to expose government tactics of propaganda, fear and deception, and to address the psychology of dealing with the rising new world order. He is also a former U.S. Marine who believes it is our duty to stand for and defend the U.S. Constitution against all enemies foreign and domestic. A peace activist, he believes information and awareness is the first step toward being free from enslavement from the globalist control system which now threatens humanity. He believes love conquers all fear and it is up to each and every one of us to manifest the solutions and the change that you want to see in this world, because doing this is the very thing that will ensure victory and restoration of the human race from the rising global enslavement system, and will offer hope to future generations.