In the Culture of Hungry Ghosts by Dylan Charles 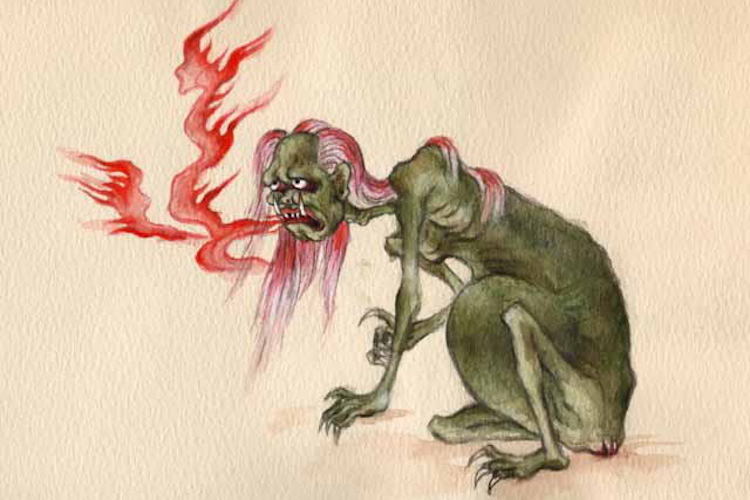 In the Culture of Hungry Ghosts

“No society can understand itself without looking at its shadow side.” ― Gabor Maté, In the Realm of Hungry Ghosts: Close Encounters with Addiction

Something wicked bubbles just beneath the surface of the collective conscience. Our society is rife with corruption, predation, perversion, over-consumption, violence, addiction and so much more. Somehow enough is never enough, as if the driving force behind human existence is pure want.

This is not true, though, for we know that spiritually well beings are content beings, looking no further than the present moment’s blessings for satisfaction. We don’t have an inherent need for want. Want is a symptom, not the condition. It’s something that enters when the spirit is untended to.

It must then be a spiritual illness which plagues society. Something secretly driving so many of us mad with insatiable desire for sensation and objects. Unforgiving cravings that manifest in any way imaginable, from sex, to money, to food, to power and even in the need to be perfect. It’s a war against the self, waged unconsciously by the self. A below subconscious campaign of self-annihilation.

There are no contemporary metaphors to understand this kind of emptiness. The void just is. And since the void is so rarely acknowledged and so rarely looked at deeply, it sits in the shadows driving us mad, steering with impulse.

In Chinese Buddhist philosophy, though, there is a story that fits. The hungry ghost.

“In Chinese Buddhist teachings, “hungry ghosts are unable to take in or assimilate what they desperately need. The problem lies in their constricted throats — which cannot open for nourishment. They wander aimlessly in search of relief that is not forthcoming.”” [Source]

Interestingly, according to some of its origin myths, the hungry ghost was born out an act of cruelty. In many of the stories, it is a wealthy man’s wife who did some terrible thing to a monk, and when she eventually dies her spirit takes the form of the hungry ghost, forever lurking in purgatory, unable to ever fill its distorted belly and therefore always needing and wanting more.

The hungry ghost, then, is an expression of karma.

Hungry ghosts are the demon-like creatures described in Buddhist, Taoist, Hindu, Sikh, and Jain texts as the remnants of the dead who are afflicted with insatiable desire, hunger or thirst as a result of bad deeds or evil intent carried out in their life times. [Source]

In the realm of hungry ghosts, a deep drama between the ego and the ghost plays out ad infinitum. It’s an interplay that feeds the ego just enough for it to survive, so that in turn the ego can feed the hungry ghost. A dead-end cul-de-sac of sorts. A looping projection of one of our worst human vulnerabilities.

“The work of the ghost does not want to completely destroy its prey. Having fed off the other through dissociative trajectories of turbulence, the ego again becomes more robust. The hungry ghost now has, as companion and source of nurture, a replenished ego on which internal feeding may resume inside the space of erasure until the plenitude of the ghost-within again permeates the intersubjective.” ~  Nick Totton, Psychoanalysis and the Paranormal: Lands of Darkness

Spiritually healthy people understand their cravings for what they, expressions of innumerable forms of pain. Manifestations of the suffering caused by disconnection from the self, and from nature. And the self is nature. There really is no distinction between the two. The illusion is of separateness.

The ghosts are there to remind us that our real work is transmuting our suffering and cruelty into resilience and compassion. It’s not enough to numb the pain, it must be used to our advantage, for our growth, to serve as a catalyst for transformation, and to provide a chrysalis in which the transformation can take place.

“We are social beings. When we feel disconnected or alienated, we experience pain. Addiction, depression, anger, and violence are different ways we react to pain. To heal our society we must heal the emotional wounds.” ~Chris Agnos

Few understand this more clearly than Dr. Gabor Maté, whose work with drug addicts has transformed our understanding of what it means to be stuck in the realm of hungry ghosts.

Dylan Charles is a student and teacher of Shaolin Kung Fu, Tai Chi and Qi Gong, a practitioner of Yoga and Taoist esoteric arts, and an activist and idealist passionately engaged in the struggle for a more sustainable and just world for future generations. He is the editor of WakingTimes.com, the proprietor of OffgridOutpost.com, a grateful father and a man who seeks to enlighten others with the power of inspiring information and action. His remarkable journey of self-transformation is a testament to the power of the will and the persistence of the human spirit. He may be contacted at wakingtimes@gmail.com.

This article (In the Culture of Hungry Ghosts) was originally created and published by Waking Times and is published here under a Creative Commons license with attribution to Dylan Charles and WakingTimes.com. It may be re-posted freely with proper attribution, author bio, and this copyright statement.