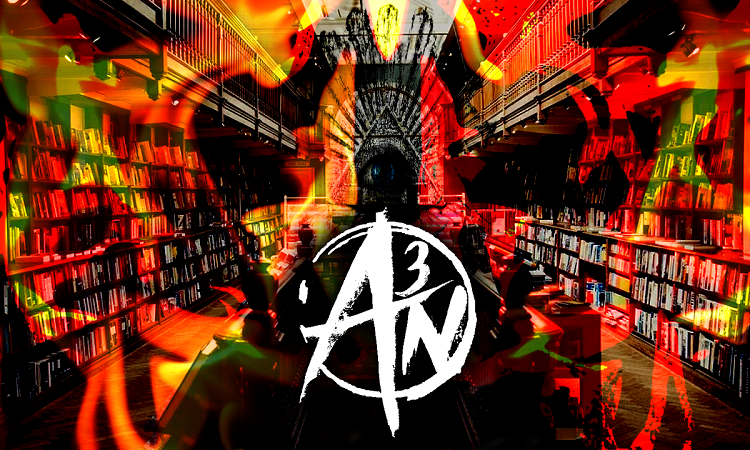 In language, definitions change and meanings naturally evolve over time and across cultural shifts. But there’s another kind of change being done to language unilaterally and intentionally, and it is designed to make you a slave.

I’ve got my old, worn copy of George Orwell’s 1984 on the bookshelf beside me. I open it to read:

“There were the vast repositories where the corrected documents were stored, and the hidden furnaces where the original copies were destroyed. And somehow or other, quite anonymous, there were the directing brains who coordinated the whole effort and laid down the lines of policy which made it necessary that this fragment of the past should be preserved, that one falsified, and the other rubbed out of existence.”

The Power of Honest Language, the Deceit of Euphemism

“Taxation is the price we pay for a civilized society.”

“Sensible (fill in the blank) laws.”

“Pay me some of your money for things I want, or be caged or killed.”

“Cutting off of supplies and trade by violent force to an entire region of individuals.”

Euphemism and sophistry are incessantly employed by those wishing to hide the true nature of their communications. Think how much harder it would be to tax people, garner approval for war or sanctions, or get support for political processes, if direct, accurate speech was used.

“My fellow people on the same violently and arbitrarily claimed piece of dirt on the earth as me: we need you to show your support for our murder of innocent people overseas by being extorted to pay for it. Our great mob rule crime syndicate has a rich history of making laws so special people like us can do whatever we want to non-special people like you, by way of words we write on pieces of paper we say are important. These values of murder, mob rule, and extortion are central to the very fabric of who we are as people-on-this-piece-of-dirt-icans.”

This is the insidious nature of euphemism perverted. Euphemism used to disguise violent and despicable acts. But what about actual examples of dictionary definitions being changed? Medical definitions? The very agreed upon meanings of words themselves?

From Dictionary to Fictionary 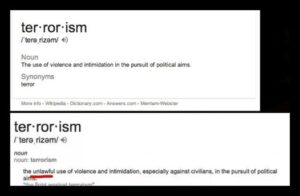 If you care to dig around a bit (I sourced and created the above image myself, in 2019), great examples of definitions being tossed down the “memory hole” can be found online. Above, two Google definitions of “terrorism” can be seen, with the older being on top. Notice the striking difference in meaning. The first definition includes as terrorism all violence and intimidation in the pursuit of political aims. The second definition qualifies the violence.

Now, according the the world’s number one search engine, as long as the violence is legal i.e. done by the government, it cannot be called terrorism. Convenient. Dropping bombs on infants? Not terror. Starting a private militia with friends to defend against the baby killers? TERROR.

An eye-opening example to be sure, and far from the only one.

After significant noise about this quiet little update and omission of natural herd immunity from this “medical expert” definition, the WHO looks to have been forced to amend things, and the current one once again includes natural immunity.

Perhaps they were busted on this count and had no choice to turn back. No bother, meaning everywhere is being eroded. If nobody stands up and fights back, soon the WHO’s preferred definition will hold sway, and the other, original definition can be incinerated. Gone forever.

Thanks to Merriam-Webster, those shouting online that humans with greater melanin levels in their skin cannot be racist now have some ammo in the form of a dictionary definition:

This second definition defining a systemic aspect of racism was added just last year. A young woman named Kennedy Mitchum had enough of people using a dictionary definition to prove they were not racist. God forbid. As this article from the BBC notes:

“Ms Mitchum had encountered people pointing to the dictionary to prove that they were not racist because of the way they felt towards people of colour. She felt the definition needed to reflect broader issues of racial inequality in society.”

To be sure, racism is systemic, epidemic, and institutionalized. But it doesn’t have to be to be racism. Strange someone would be opposed to others using the actual meaning of words to defend themselves against accusations of bigotry.  Lucky for everyone, at least for now, Merriam-Webster’s number one definition still remains:

Isn’t the above definition enough to define the concept? Why not just add that it can be and often is systemic? Now what we are working with is two definitions that could almost be differentiated from one another qualitatively, when what we dealing with is really very simple to define: hatred of another human based on biological differences.

By this updated definition, if a non-white individual wishes to oppress me to gain social, political, or economic advantage, it is not racism. Why? Because it is not “systemic.” They can oppress me as long as they are not viewed as “the system.” They are not white and white people are seen as dominating most systems. In other words: all white people are the same. A racist definition of racism. Very clever.

One last example. Contrary to claims that this definition has been changed recently, it has remained the same since its introduction to Merriam-Webster’s dictionary in 2018. What is interesting is that though the definition itself is terribly insidious, most social justice warrior types seem happy just to “debunk” the mistaken chronologies put forth by those disturbed by it. They don’t focus on the lunatic definition itself.

For anyone with any critical thinking skills, it is clear to see why we are now in so much danger as people who value consent. Have a look: 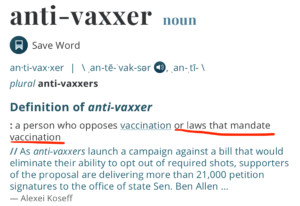 Surely Merriam-Webster is not so thick as to not understand one can oppose something being mandated and still be an advocate of said thing. There are many people, for example, who are pro-vaccine but anti-mandate. Now even if I support an influenza vaccine, if I do not want it to be forced on people violently, I am still by definition called an “anti-vaxxer.”

Do you see what they are doing to us? They are programming reality via language. Those not paying attention will end up unwittingly redefining their reality and reshaping it, based on these literal lines of linguistic code social engineers are feeding into our brains. Watch out. And again I say unto you, watch.

Save your classic novels. Keep screenshots, archives, and records. Music with “offensive” language. Save actual, physical writing and photos where advantageous. The beautiful thing about the internet is the connection we all have to virtually limitless information resources and individuals. The downside is, it is really easy to silently change and erase information in the digital realm.

Don’t let them incinerate meaning. Let’s turn the flames back on the book burners, and let them feel the devouring hellfire of etymology and memory.