Diet & the Endocannabinoid System: Food for Thought By Martin A. Lee 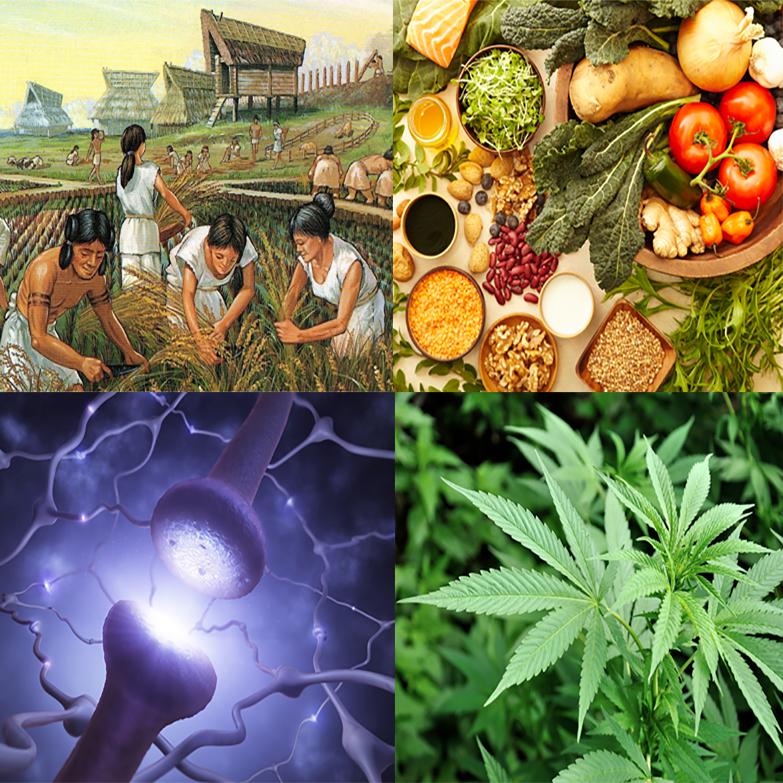 By Martin A. Lee

Cannabis has been a friend to humankind since before the written word, providing fiber for cordage and cloth, seeds for nutrition, and roots, leaves and flowers for ritual and healing. During the Neolithic period, our ancestors discovered uses for every part of cannabis, which was one of the first agricultural crops, perhaps the first, ever to be grown and harvested some 12,000 years ago.

Agriculture, strictly speaking, is not a natural phenomenon. It is an expression of human ingenuity, an invention that has been described as the basis – literally the ground – of modern civilization. “The onset of agriculture was probably one of the most dramatic and important developments in human history,” writes Swiss scientist Jürg Gertsch, who explores the profound consequences of dietary changes brought on by food cultivation in a recent article in the British Journal of Pharmacology, entitled “Cannabimimetic phytochemicals in the diet – an evolutionary link to food selection and metabolic stress adaptation?”

Gertsch’s provocative thesis is that chronic metabolic disorders, currently a worldwide pandemic, are rooted in “a mismatch between ancient genes and high caloric diets” that ensued with the introduction of agriculture. “The multimillion year evolutionary process during which nearly all genetic change reflected the life circumstances of our ancestors [was] suddenly disturbed” when “carbohydrate farming” supplanted the “hunter-gatherer diet rich in animal food,” says Gertsch, who maintains that “the interplay between diet and the endocannabinoid system” is key to understanding today’s obesity/diabetes crisis and its potential remediation.

The endocannabinoid system, an ancient biological signaling network, regulates numerous physiological processes, including intestinal function, glucose metabolism, and the stress response. A dysregulated endocannabinoid system is implicated in metabolic and bowel pathologies and many other diseases. Gertsch discusses the different, yet complementary, roles of the cannabinoid receptors – CB1 and CB2 – pertaining to diet, digestion, and energy metabolism.

Mammalian CB1 receptors are concentrated in the brain and the central nervous system. They are also present in taste buds and the enteric nervous system (the gut-brain axis). Tetrahydrocannabinol (THC), marijuana’s main psychoactive component, boosts appetite and food intake by binding to the CB1 receptor – a phenomenon playfully known as “the munchies.” But CB1 receptors, as Gertsch points out, “can exert paradoxical effects on food intake,” facilitating essential nourishment as well as metabolic imbalance.

CB1 receptor signaling triggers a newborn’s suckling instinct. Mother’s milk is well endowed with arachidonic acid, a basic building block of the brain’s own marijuana-like compounds, anandamide and 2AG. These endogenous cannabinoid compounds bind to the same cell receptors – CB1 and CB2 – that mediate many of the effects of marijuana. Found in eggs, meat, and dairy products, arachidonic acid intake increases endocannabinoid levels in different tissues and is crucial for pre- and post-natal brain development.

In addition to heightening one’s sense of smell and stimulating appetite, CB1 receptor signaling “may facilitate survival after excessive physical activity, stress and trauma by restoring homeostasis, suppressing negative memories and reducing anxiety at the level of the central nervous system,” writes Gertsch, who explains that “CB1 receptor activation is associated with increased energy intake and decreased energy expenditure by controlling neural pathways.”

And CB1 taketh away

Combined with rigorous, day-to-day aerobics, the hunter-gatherer diet did not engender obesity, metabolic problems or cardiovascular disease. But the high-fat hunter-gatherer diet, which served our ancestors well, changed significantly with the advent of cultivated food. “Carbohydrate farming incited the most important dietary transition, which is still ongoing to the present day,” says Gertsch. There is a continuum, he maintains, between plant carbohydrate cultivation of yore and today’s over-starched, over-sweetened and over-processed Western diet.

Grain, carbs, sugar, alcohol, high fructose corn syrup: What started as the basis of civilization has spiraled into a mass-marketed refined sugar binge. “Dietary carbohydrates once essential for the cognitive and social development of Paleolithic humans gradually turned into a metabolic stress factor as a function of their glycemic indices,” Gertsch explains. “Epidemiological evidence points toward a pandemic diet-induced glucose toxicity due to excess sugar intake.”

“The generation and excess use of sugars could be seen in analogy to the detrimental impact of the first distilled alcohol on humans. The sudden availability of excess sugars in combination with fats in diet may have led to a collision of genes that evolved to cope with high energy demands due to constant physical activity,” says Gertsch. “Excessive consumption of high-energy palatable food without physical activity contributes to obesity.” Which, in turn, leads to metabolic syndrome, heart disease, and other degenerative conditions.

CB2 to the rescue

Gertsch suggests that the contemporary “mismatch between ancient genes and high caloric diets” might be reconciled in part by CB2’s ability to mediate the effects of secondary plant metabolites (terpenes, flavonoids and other polyphenolic compounds) that are found in kitchen spices, leafy greens, and other vegetables. “Dietary secondary metabolites from vegetables and spices are able to enhance the activity of CB2 receptors and may provide adaptive metabolic advantages and counteract inflammation,” Gertsch reports.

Several scientific studies have explored the link between the intake of polyunsaturated fatty acids (PUFAs) and the endocannabinoid system. Docosahexaenoic acid (DHA), an omega-3 fatty acid, is the principal long chain PUFA found in the human brain. (Omega oils are considered “essential” fatty acids because they can’t be produced by the body in sufficient amounts and therefore must be ingested.) Dietary DHA and eicosapentaenoic acid (EPA), another long chain PUFA, support neurological function, retinal development, and overall health by up-regulating CB1 receptor gene expression. Preclinical research has shown that administering DHA and EPA prevented glucose intolerance and low-grade inflammation of white adipose tissue in obese mice.

The manifold health benefits of omega-3 PUFAs – prominent in oily fish, walnuts, flax and hempseeds, for example – include the prevention of heart disease, dementia, cancer cell proliferation, insulin resistance, and depression. Low levels of DHA and EPA can lead to premature aging, as well as mental illness. Nutritional omega-3 dietary deficiency “abolishes endocannabinoid-mediated neuronal functions” and is associated with neuropsychiatric disease, according to a 2011 report in Nature Neuroscience. Alzheimer’s sufferers and children with attention deficit hyperactivity disorder tend to be deficient in omega-3 fatty acids…

A healthy balance of omega-3 fatty acids and grain-derived omega-6 fatty acids is fundamental for preventing and managing obesity and metabolic syndrome. But a well-balanced ratio of PUFAs is typically lacking in a carb-heavy Western diet that favors greater omega-6 intake at the expense of omega-3. Gertsch suggests that it is possible “to reprogram energy metabolism” by increasing omega-3 and decreasing the amount of omega-6 in one’s diet: “Generally a lower omega-6 to omega-3 ratio is desirable in reducing the risk of many of the chronic diseases of high prevalence in industrial society or societies with high carbohydrate intake.”

A 2014 paper by Japanese scientists reported that the ratio of dietary omega-6 to omega-3 fatty acids influences how CB1 cannabinoid receptors regulate fear memory. The upshot is that altering the omega-6/omega-3 ratio in one’s diet could improve treatment regimens for anxiety and PTSD, as well as for metabolic disorders. Human beings have evolved in such a way as to have “an advanced capacity to digest and metabolize higher fat diets,” says Gertsch, who concludes that a “low-carb, high fat diet should be the most effective measure against obesity” – with the caveat that a high fat diet must be combined with regular physical exercise, much like in the hunter-gatherer days before agriculture.

Given what scientists know about how the endocannabinoid system functions, there is a strong basis for adopting a high fat, low carb diet with lots of fresh vegetables and spices, both as a general health practice and a remedy for many maladies.

Martin A. Lee is the director of Project CBD and the author of Smoke Signals: A Social History of Marijuana – Medical, Recreational and Scientific.

1 THC binds directly to the CB2 receptor and activates it, but not as potently as THC binds to CB1, the “psychoactive” receptor.

2 When metabolized, fatty acids yield large quantities of mitochondria-mediated ATP, the main energy source for most cellular functions. Fatty acids are important components of phospholipids that form the phospholipid bilayers out of which all the membranes of cells and the membranes of organelles within cells, such as mitochondria and the nucleus, are created. In addition to modulating cannabinoid receptor activity, diet affects cell membrane fluidity and permeability, which, in turn, impacts the ability of fatty acid binding proteins to transport endogenous cannabinoids and plant cannabinoids through the cell’s membrane and into the cell’s interior, where they activate nuclear and mitochondrial receptors.

Via Phoenix is Risen