Don’t Let the Flu Vaccine Get You! 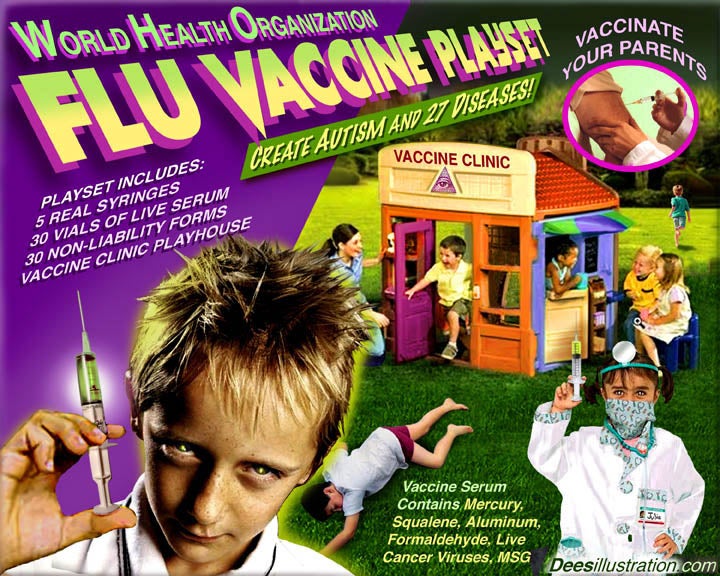 Don’t Let the Flu Vaccine Get You!

No [Flu] Vaccines for Me

“It’s your health we are talking about!”

Seasonal flu generally peaks in February and March. For the past few years, around 3.5 percent of all doctor visits in late February have been for flu-like symptoms. Last year, that number was nearly half at 1.8 percent.

Dr. Joseph Mercola: It’s becoming increasingly clear that the SWINE FLU pandemic of 2009 will go down as one of the biggest government and pharmaceutical SCAMS ever. And this has not only renewed a healthy, and necessary, skepticism about the swine flu vaccine, but it has also created a more open debate about vaccinations in general.

57 million? But the feds stopped counting “suspected” swine flu cases in July. The truth is, no one knows how many swine flu cases there were, not even the math whizzes at the CDC. That 57 million figure is just the midpoint of a massive estimate range that claims up to 84 million Americans may have had swine flu. They may as well say it was between 1 and 300 million.

How many people die from flu?

Usually 36,000 people die from flu complications yearly. We are WAY behind the usual mortality so far. Flu isn’t the big killer, the secondary bacterial infection is. (if it was flu in the first place). WHO has confirmed 18,036 deaths from the H1N1 starting last year – far fewer than would have died from seasonal flu during the same period. Dr James Bogash <http://www.facebook.com/profile.php?id=1136003930>: when the CDC states some 30,000 people a year die from influenza, the number is more like 700

Most common side effects with Synagis may include upper respiratory tract infection, ear infection, fever, and runny nose. In children born with heart problems, Synagis was associated with reports of low blood oxygen levels and abnormal heart rhythms. Side effects, such as, skin reactions around the area where the shot was given (like redness, swelling, warmth, or discomfort) have also been reported.

About a quarter of the swine flu vaccine produced for the U.S. public has expired – meaning
that a whopping 40 million doses worth about $260 million are being written off as trash. About 30 million more doses will expire later for a total of more than 43 percent of the supply for the U.S. public going to waste.

Germany and Spain are trying to return or cancel orders for millions of doses H1N1 vaccines.

Australia, just coming out of its flu season, had to suspend flu shots for kids – because kids were suffering febrile seizures at 10 times the normal rate. There is a “normal rate?” WAKE UP FOLKS! Seizures are usually an indicator of brain damage happening — now. Who wants a flu shot AND a seizure and still perhaps get the flu… or worse?

Does the flu vaccine work?

If you had your flu shot last year you are twice as likely to contract swine flu according to a Canadian study.

There’s no evidence that flu shots cut the number of flu deaths. None whatsoever… 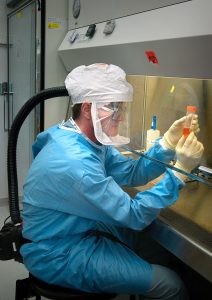 What’s in the flu vaccine?

Thimerosal is in vaccines. 250 times EPA safety limits in 1 flu shot. Material Safety Data sheets for Thimerosal lists: fetal death, miscarriage, mental retardation and gross motor impairment as possible outcomes of in utero exposure to Thimerosal. There are 3,000 trillion atoms (25 mcgs) of mercury in it. Who gives a baby 50 mcg of mercury in two flu shots? Newest CDC flu recommendations: During the 2010-2011 season, 2 doses of a 2010-2011 seasonal influenza vaccine should be given at a minimal interval of 4 weeks to children aged 6 months to 8 years. AND the CDC is, of course, mentioning pandemic…again…

Squalene: “Carcinogenicity – we have done no testing for the carcinogenicity of MF59 adjuvant in any of our vaccines. We haven’t done it and we don’t plan to.” Dr. Novicki, Scientist for Novartis.
WHO website: Since 1997, an influenza vaccine (FLUAD, Chiron) which contains about 10 mg of squalene per dose, has been approved in health agencies in several European countries. Squalene is present in the form of an emulsion and is added to make the vaccine more immunogenic. The difference between “good” and “bad” squalene is the route by which it enters your body. Injection is an abnormal route of entry which incites your immune system to attack all the squalene in your body, not just the vaccine adjuvant. Your immune system will attempt to destroy the molecule wherever it finds it, including in places where it occurs naturally, and where it is vital to the health of your nervous system. 95% of overtly ill deployed GWS patients have antibodies to squalene.

Flu vaccines can also contain a number of chemical toxins, including ethylene glycol (antifreeze), formaldehyde, phenol (carbolic acid) and even antibiotics like Neomycin and streptomycin.

Russell Blaylock MD states that Celvapan, the Baxter swine flu vaccine, uses cultured cells from the African green monkey. These cells are previously implicated in transmitting a number of vaccine-contaminating viruses including HIV.

According to the CDC, the following vaccines which are marketed as mercury free, actually do have mercury in them (less than 3mcgs per vaccine) DTaP (Tripedia) DTaP/HIB (TriHIBit) DT (Sanofi) Hep B (Engerix-B) Hep A/Hep B (Twinrix) Influenza (Fluarix, Flulaval, Fluvirin and Fluzone brands) Japanese Encephalitis (JE-Vax) Meningococcal (Menomune) DT (Decavac) DT (Massachusetts)

When patients complain of adverse reactions, studies show that doctors are likely to dismiss them. Over 90% of vaccine injuries and reactions alone go unreported.

A new study shows that men who have sex at least twice a week makes the body more capable of fighting cold and flu. Side effects: happiness and physical exhaustion.

WC Douglass MD: Vitamin D and the flu. If you were to maintain your vitamin D levels within the optimal range of 50-65 ng/ml, you would likely avoid being affected during the cold and flu season entirely. According to a recent study, vitamin D may help reduce the incidence and severity of both viral respiratory tract infections and the flu. Researchers gave Japanese school children either a D supplement or a placebo, and found the kids who got the D were 58 percent less likely to get the flu.

Dr. Andrew Weil for talking about the benefits of taking herbs and natural substances to prevent the Swine flu.” Astragalus has been noted for 4,000 years in Chinese Medicine.
Despite what they would have you believe, healing did occur before pharmaceuticals were invented–using herbs and foods and fasting and cleansing.

Instead of the deadly jab, try taking lots of GMO-free vitamin C, Lysene, vitamin D and astragalus. All of these are proven to be effective in flu prevention – but without the adverse vaccine risks.

Beyond the flu vaccine

FDA’s motto for Fluzone: “approve first, ask questions later.” Unfortunately, “later” is often after you’ve suffered from side effects like pain, redness, swelling, headaches, muscle aches, fever and worse. And those are just the known side effects of this under-tested drug.
Tamiflu Drug giant Roche is being accused of hiding key data from eight unpublished studies on its flu drug, Tamiflu and, as a result, researchers now say there’s no evidence that the drug can reduce the risk of flu complications such as pneumonia. Original studies used to back Tamiflu were written by Roche employees and consultants, and that not one researcher named in a study even claimed no involvement in the project.
So here’s about all those researchers can say about Tamiflu now: It could reduce flu symptoms by about a day.
And here’s what I can tell you about this dangerous drug: Its side effects include nausea, vomiting, stomach pain and diarrhea. Some patients experience severe allergic reactions, confusion, bizarre behavior, hallucinations, seizures, fever, sore throat and more.