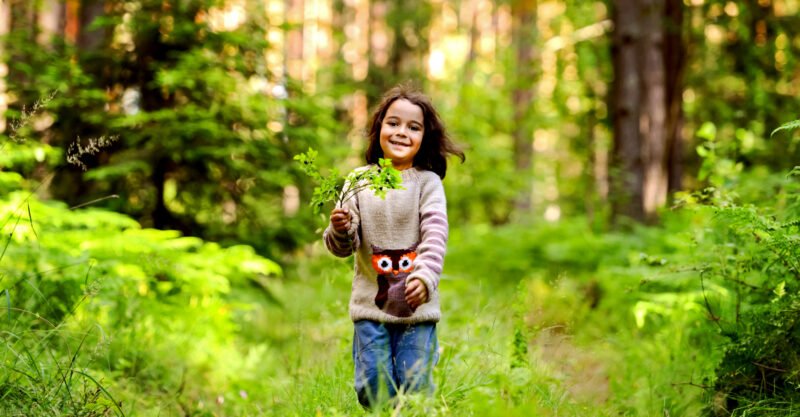 Green spaces support children’s development better than pavement, and forested space is more beneficial than grassy areas, according to a study of more than 27,000 children in Vancouver, Canada.

The authors of the study, which appeared in the May issue of Environment International,  investigated the association between early-life residential exposure to vegetation and childhood development in a population-based birth cohort in Vancouver.

They looked not only at green space but also at what kind of green space was more beneficial: trees or grass.

Their hypothesis was that there would be a positive association between vegetated land cover (green space) and childhood development.

They also hypothesized that the association with childhood development would vary according to vegetation type.

The study took place in Metro Vancouver — the third-largest metropolitan area in Canada, with more than 2.5 million residents.

The researchers assessed Early Development Instrument (EDI) teacher ratings of kindergarteners that were completed in the spring of the academic years 2005–2006 to 2010–2011, when children were, on average, 5-and-a-half years old.

EDI is a questionnaire developed by Dr. Dan Offord and Dr. Magdalena Janus at the Offord Centre for Child Studies at McMaster University. The 103-item questionnaire, completed by kindergarten teachers in the second half of the school year, measures children’s ability to meet age-appropriate developmental expectations in five general domains.

The authors of the study assessed the environment near children’s homes using a land cover map of Metro Vancouver derived from a combination of RapidEye high spatial resolution imagery from 2014 and airborne laser scanning data.

The data about the children’s EDI scores and the vegetation cover near their homes were linked using the children’s six-digit residential postal codes, which were recorded at each contact with the healthcare system.

The postal code is a common geographic identifier used in Canadian environmental epidemiological studies and generally corresponds to a block or single multi-unit building in urban areas, according to the researchers.

The authors found that residential exposure to green space in early childhood may improve childhood development.

The authors noted their results are consistent with previous research that showed residential access and exposure to green space are associated with better childhood development.

The researchers also found exposure to green space may reduce the risk of developmental vulnerability, and reducing the risk of poor childhood health and development through residential exposure to vegetation offers important public health benefits.

“This knowledge can inform preventative programs, including urban greening, to be prioritized towards children considered ‘vulnerable’ to poor development, for whom interventions may be most effective.”

Ideas about why trees — more than grass — might support child development include the hypothesis that trees have attributes that help humans recover from mental fatigue and may help reduce stress more than other types of plants.

Furthermore, exposure to paved surfaces seemed to have a stronger impact on EDI scores than did residential exposure to vegetation.

According to the authors, the study’s results suggest:

“Converting paved surfaces to vegetated environments may have important effects on early childhood health and development, as not only will they offer added beneficial services provided by green spaces, but perhaps more so reduce the adverse effects associated with impervious environments.”

The authors argued that while the strength of observed associations between residential green space exposure and childhood development were relatively weak, “even small individual gains can shift the population distribution of early childhood development to higher levels, resulting in important public health benefits.”

They argued their results support urban planning and policy frameworks that increase the availability of green space in neighborhoods.

“If confirmed by other studies, our findings can inform urban planners of the types of green space that support optimal early childhood health and development, with potential positive health benefits across the life course,” the authors wrote.

Do children have a right to nature?

The Vancouver study adds to the evidence that access to green space benefits children’s development and may help prevent poor health and development in vulnerable children.

However, it’s been documented that in cities, green space may not be equitably distributed — leading to questions about environmental justice.

In 2019, Louv wrote an article describing a movement to codify the right to nature into the United Nations Convention on the Rights of the Child, one of the very few human rights instruments that refer to the environment.

The Child Friendly Cities Initiative seeks to actualize the Convention on the Rights of the Child.

According to UNICEF, child-friendly city is “a city, town or community in which the voices, needs, priorities and rights of children are an integral part of public policies, programmes and decisions.”

A child-friendly city also is a place where children can “Live in a safe secure and clean environment with access to green spaces.”

Julie Comber is a freelance science reporter for The Defender. She is a mother, activist, writer and singer-songwriter. She has a Master’s in human genetics, a Master’s in bioethics and a Ph.D. in environmental education. Julie seeks to protect children from corporate thieves. She acknowledges, with gratitude, to live on the traditional and unceded territory of the Algonquin Anishinabe.