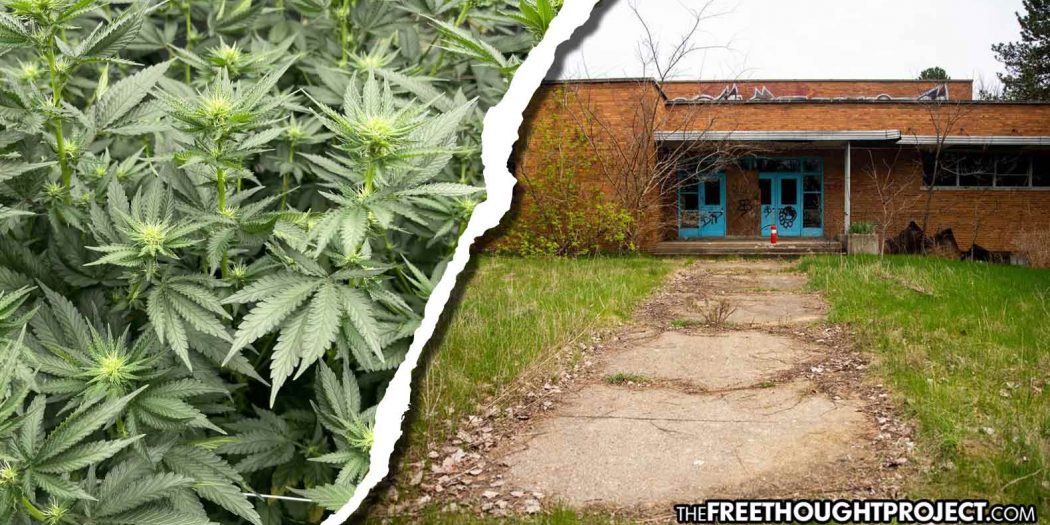 As the drug war crumbles across the United States, those who profit from kidnapping, caging, and killing people over arbitrary substances are clawing to the shreds of their existence in a desperate yet failing attempt to keep it alive. Perhaps there is no greater symbol for the current paradigm shift than what’s taking place in Flint, Michigan. The city just agreed to sell the former police academy for $500,000 to a company who is going to turn it into a marijuana grow facility.

Naturally, the decision to do so did not sit well with those who still think that this incredible plant is somehow related to criminal behavior. According to mlive.com, the city council was split on their decision and the measure only passed with a 5-4 vote.

The bidding has been empty for years, is covered in graffiti and is an eyesore in the city. Yet somehow multiple people were opposed to selling it for 25 times more than the only offer ever to come in over the last several years of $20,000.

“It’s kind of ironic that the training facility for the police department, that used to go against marijuana, is going to possibly become a marijuana grow shop,” Flint council member Santino Guerra, who voted for the sale said.

This was “absolutely fair and open bidding” and a “half-million dollars can do a lot for our city’s general fund,” council President Kate Fields said, according to the outlet.

Before the grow operations could start at the old police academy, the company who purchased it, Evergrow LLC, would be required to obtain the approval of the Flint Planning Commission and apply for and receive a marijuana business license from the state. The company would also be required to file for and obtain all necessary permits, pay fees, pass required inspections, and receive a certificate of occupancy for the building.

This move to erase the police state culture and replace it with a free market version of what police used to justify their existence for so many years cannot be understated. And it has happened before.

As we previously reported, a tiny California desert town made a drastic change to reverse its downward spiral and embrace an enlightened future. For 24 years, Adelanto, California tried unsuccessfully to sustain its economy through prisons, but in 2016, they decided to to cultivate a different kind of business — cannabis. Since then, multiple grow operations have replaced the prison system and the town is better off for it.

Despite this move, however, cops are still going after those who dare to grow the plant without paying government for the privilege of doing so. In January, “hero” cops busted an unlicensed grow operation in the town and destroyed over 20,000 plants and 186 pounds of processed cannabis.

TFTP also reported on the town of Coalinga, California where a similar symbolic move took place the same year Adelanto made their decision.

In 2016, the city council voted 4-1 in favor of an ordinance to allow commercial cannabis cultivation at the empty Claremont Custody Center that housed inmates who were likely put in there for that very reason.

They also voted for ballot initiatives to let the citizens decide if the town should host cannabis dispensaries, and if all these operations should be taxed. Coalinga joined its fellow California town, Adelanto, in restoring freedom and medical advancement, as well as generating revenue.

Momentum is growing around the country to stop filling jails with non-violent drug offenders. One measure of progress would be more jails becoming empty. What an inspiring trend it would be to turn these places of state-sanctioned misery into grow centers for a miraculous therapeutic plant.