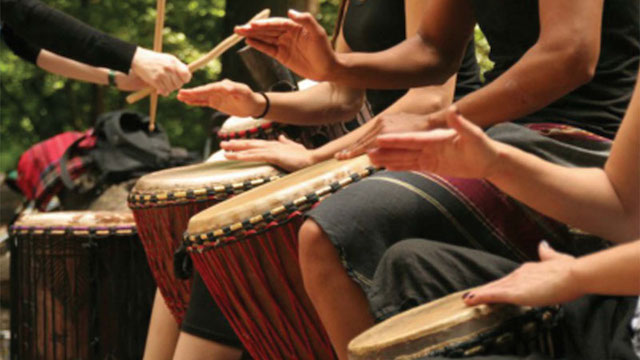 With the World Health Organization identifying depression as the #1 leading cause of disability, globally, and psychiatric medications causing severe side effects, including permanently disabling the body’s self-healing mechanism, drug-free alternatives are needed now more than ever. Could group drumming provide just such a solution? 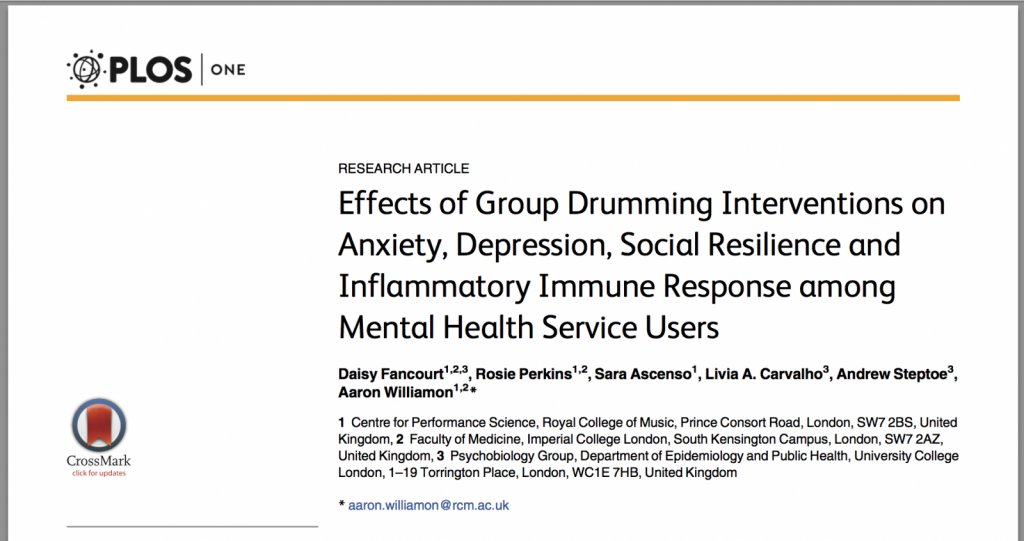 Titled, “Effects of Group Drumming Interventions on Anxiety, Depression, Social Resilience and Inflammatory Immune Response among Mental Health Service Users,” UK researchers enrolled thirty adults who were already recipients of mental health services but were not receiving antidepressant medications in a 10 week program of drumming versus a control group of 15. The two groups were matched for age, sex, ethnicity and employment status. The control participants were informed that they were participating in a study about music and mental health but were not given access to the group drumming sessions. The treatment group received weekly 90-minute group drumming sessions over a period of 10 weeks. The drum group sizes were between 15-20. Each participant was provided with a traditional African djembe drum and sat in a circle. Twenty percent of the session time involved instruction and talking, whereas 80% was direct participation in music-making. The control subjects were enrolled in community group social activities (e.g. quiz nights, women’s institute meetings and book clubs). Both groups were monitored for biomarkers related to immune status and inflammation, e.g. cortisol and various cytokines, to track the biological as well as psychological changes associated with the intervention.

The results of the study were remarkable and reported as follows:

Significant improvements were found in the drumming group but not the control group: by week 6 there were decreases in depression (-2.14 SE 0.50 CI -3.16 to -1.11) and increases in social resilience (7.69 SE 2.00 CI 3.60 to 11.78), and by week 10 these had further improved (depression: -3.41 SE 0.62 CI -4.68 to -2.15; social resilience: 10.59 SE 1.78 CI 6.94 to 14.24) alongside significant improvements in anxiety (-2.21 SE 0.50 CI -3.24 to -1.19) and mental wellbeing (6.14 SE 0.92 CI 4.25 to 8.04). All significant changes were maintained at 3 months follow-up. Furthermore, it is now recognised that many mental health conditions are characterised by underlying inflammatory immune responses. Consequently, participants in the drumming group also provided saliva samples to test for cortisol and the cytokines interleukin (IL) 4, IL6, IL17, tumour necrosis factor alpha (TNFα), and monocyte chemoattractant protein (MCP) 1. Across the 10 weeks there was a shift away from a pro-inflammatory towards an anti-inflammatory immune profile. Consequently, this study demonstrates the psychological benefits of group drumming and also suggests underlying biological effects, supporting its therapeutic potential for mental health.”

In summary, by 6 weeks the drumming intervention group experienced decreases in depression, increased social resilience; by 10 weeks they saw further improvements in depression, alongside significant improvements in anxiety and mental wellbeing. These changes continued to be maintained 3 months follow-up. The drumming intervention group also saw their immune profile shift from a pro-inflammatory towards an anti-inflammatory response. 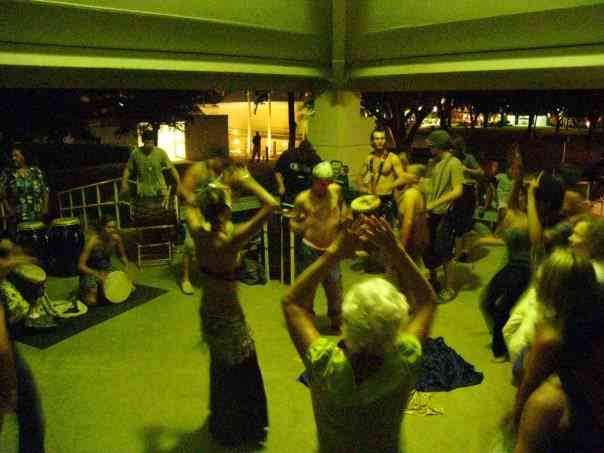 This remarkable research opens up the possibility that group drumming may produce positive psychospiritual changes that, in comparison to conventional treatment with psychiatric medications like Prozac, support side-effect free improvement in parameters beyond symptom suppression.

Additionally, when one considers that the benefits associated with conventional pharmaceutical treatment of depression may actually result from the placebo effect and not the chemicals themselves, as well as the fact that antidepressants can cause severe adverse effects including suicidal ideation, the findings of this exploratory study becomes all the more promising.

Another important discovery here is that group drumming down-regulated inflammation within the immune profiles of study participants. Could the dysregulation of inflammation be a root cause of a wide range of psychiatric disorders and anti-inflammatory interventions a solution? This is exactly a thesis explored in-depth by Dr. Kelly Brogan in her new book, “A Mind of Your Own: The Truth About Depression And How Women Can Heal Their Bodies To Reclaim Their Lives,” wherein the crucial physiological role of inflammation in conditions as varied as depression, bipolar disorder, and anxiety are discussed. The inflammation-depression link, in particular, explains how interventions such as turmeric have been clinically proven to be superior to common antidepressant medications like Prozac, presumably because of turmeric’s broad spectrum and systemic anti-inflammatory properties.

In a previous article titled, “6 Ways Drumming Heals The Body, Mind, And Soul,”  I reviewed the published scientific literature on drumming’s therapeutic potential, and explored some of the possible evolutionary origins of this ancient cultural technology. It is fascinating to consider that even insects drum, and that human language itself may have originated from these primordial gesticulations, which appear almost universally within the animal kingdom. Moreover, sound waves (percussion) may carry biologically meaningful energy and information with epigenetic significance. Drumming could therefore be considered a form of “informational medicine.”

While the science on drumming’s therapeutic value continues to accumulate and is increasingly compelling, it may not at all be necessary. The most important thing to remember is that drumming is something one must directly experience in order to fully appreciate and understand it. There are hundreds of community drum circles throughout the country. They attract all ages, walks of life, experience levels, and are always free to join. Those who know them intimately understand that the only thing required to be part of a drum circle is a human heart beat, as the beat of the drum and this ancient rhythm within your chest are fundamentally one. 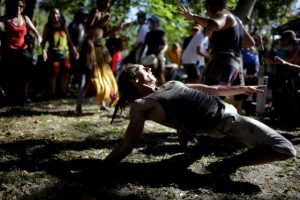 Anthony Dunford dances with others in the drum circle during the Earth Day festival at Koreshan State Historic Site in Estero on April 24, 2010. Greg Kahn/Staff

“Rhythm and harmony enter most powerfully into the inner most part of the soul and lay forcible hands upon it, bearing grace with them, so making graceful him who is rightly trained.”  – Plato

Where I come from we say that rhythm is the soul of life, because the whole universe revolves around rhythm, and when we get out of rhythm, that’s when we get into trouble.” – Babatunde Olatunji

“Rhythm is a heartbeat. It’s the first drum, a story in sound that reveals our imagination and celebrates our power. Rhythm is the multi-culti common ground of the human family.”-Tony Vacca