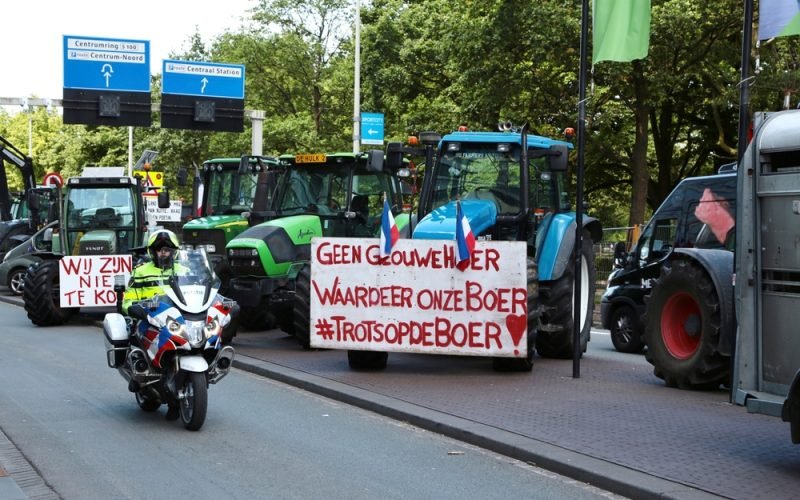 Huge protests similar to the recent ‘Freedom Convoy‘ in Canada are occurring in the Netherlands. Farmers have taken to the streets in the thousands to protest new government policy set to force farmers to cut emissions of nitrogen, as well as cut their livestock herds dramatically. The Dutch government acknowledged that many farms will simply not make it through this transition and have offered to buy out the farmers.

Farmers who do not comply with the new government regulations can see their properties seized by the Dutch government.

These protests initially began in 2019 but were stunted by the onset of COVID.

According to the lawmakers, emissions of nitrogen oxide and ammonia produced by livestock need to be drastically reduced to meet the climate goals the Netherlands has set. This is especially important close to natural areas that provide habitats for wildlife and endangered plants.

The goal is to cut nitrogen oxide and ammonia emissions by 50 percent across the nation by 2030. The government is calling this an “unavoidable transition” that will drastically improve environmental conditions, especially air, land and water quality, and that farmers will simply have to adapt or deal with the prospect of shutting down their businesses.

In the past, the government has cut the national maximum speed limit on highways from 130 kilometers per hour (80 miles per hour) to 100 kmh during the day as a way of reducing nitrogen oxide created by vehicle engines.

Approximately 40,000 farmers gathered last week to protest the government’s plans. Many arrived in their trucks and tractors to block roads, access points and even borders. Earlier this week, they covered highways, made appearances at town and city halls and, in some cases, have started bonfires outside the buildings.

Our team is not on the scene in the Netherlands to verify, but the government is claiming that these protests are turning violent – farmers on the ground have a different story.

Claims have been made that tear gas has been used in an attempt to subdue the protests. All while there is footage on social media of police firing shots at farmers. 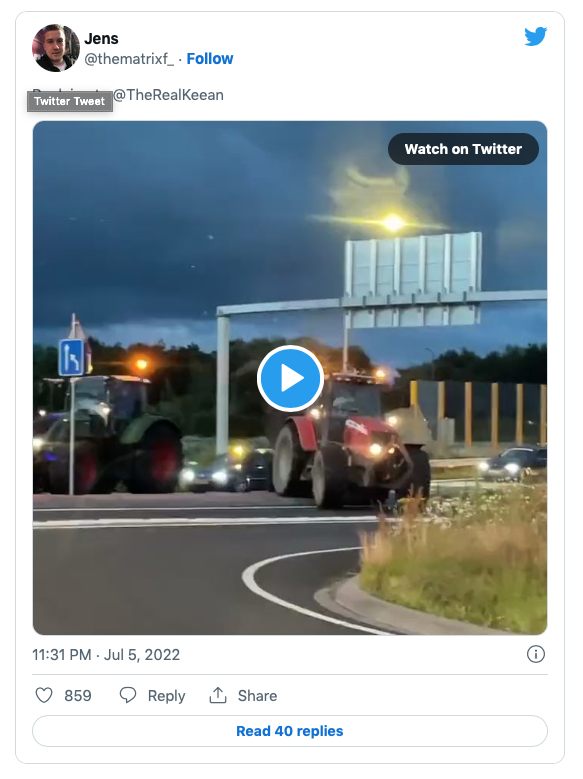 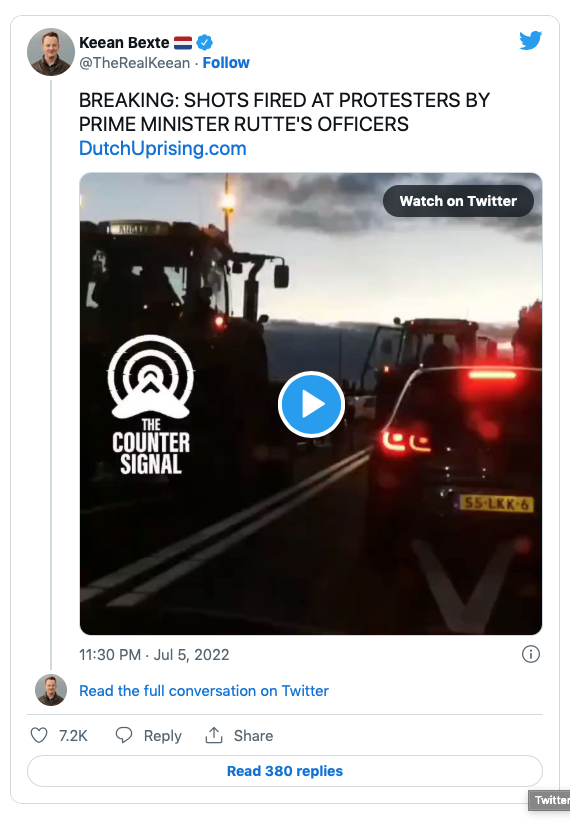 Media in the Netherlands is also painting the “extremist and militant” narrative, which has caused an even harsher reaction from protestors due to the fact that government and media is misrepresenting the truth, painting a false narrative with regards to the nature of these protests.

Here in Canada, the Canadian government along with mainstream media completely misrepresented the peaceful nature of the Freedom Convoy, and also labelled that protest as being one full of hate, extremism and racism. Our team was on the ground in Ottawa from the Freedom Convoy for almost the entire length of the protest, and it was nothing like what was said in mainstream media and popular politicians.

This is a common and classic tactic by governments. Simply label a threatening demonstration as extreme to justify the use of force in order to shut it down.

Even prior to these recent announcements, the Dutch government has been paying farmers to shut down pig farms, effectively shrinking the countries nitrogen footprint.

As a result of livestock farms being cut, and farmers unable to use manure as fertilizer, artificial fertilizer costs have skyrocketed – making it even harder for farmers to operate. An illustration of how many aspects of our economies are deeply intertwined.

Furthermore, the Netherlands is the second largest exporter of agricultural products in the world, this will likely have a ripple effect and cause even more food shortages and skyrocketing prices for everyone.

Ultimately, it seems big food corporations are in prime position to take over and ‘create’ our food however they see fit. This seems to be happening all in the name of the idea that it’s necessary, and good for everybody as well as the planet. But is this even true? How do we know?

When it comes to climate science, just like health science, evidence that calls into question measures being taken to combat climate change are never given any attention via mainstream media. Scientists are constantly ridiculed, ignored and censored. Why is there never an appropriate debate and conversation with a balanced perspective presenting both sides? Why does mainstream media and government always paint a picture of black and white when it’s nothing of the sort?

We all want a cleaner world and a cleaner environment. We all to help our planet thrive, but are we taking the best steps to get there?

Are the climate measures we are seeing around the globe really about what’s best for our planet? Or are they simply being used to put more power, control and money into the already very wealthy political and corporate elite?

Those who have dove deeply into the subject of climate change see this very quickly: you cannot simply solve our climate woes by planting more trees or lowering CO2 emissions, as you are just looking at one TINY aspect to the puzzle. This direction won’t truly help us solve the problems, it will only make us think we are doing that.

We produced a short documentary in January 2020 to illustrate this point. You can watch it below.

Perhaps what’s even more worthy of questioning is the fact that there are many technological solutions to our climate woes that are going completely unacknowledged by wider culture. Technologies that can completely free us from the use of modern day fossil fuels and outdated technologies like wind, solar and geothermal.

Here is an example of just one.

No matter which end of the spectrum you may land on in terms of the climate debate, is it not important that we acknowledge all possible solutions we have? Or should we only consider the plans of governments who have been deciding what will happen for the masses without their consent? Plans that come from an economic elite that is grabbing more and more control and power every year.