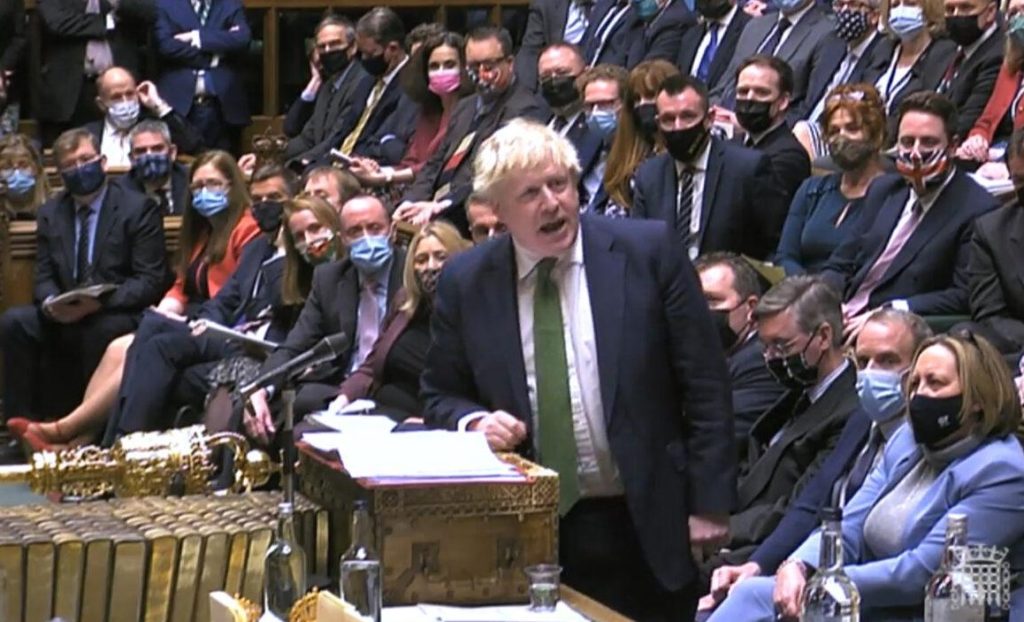 Restrictions including COVID-19 passes, mask mandates, and work-from-home requirements will be removed in England, UK Prime Minister Boris Johnson announced on Wednesday. Johnson also suggested that self-isolation rules may also be thrown out at the end of March as the CCP (Chinese Communist Party) virus pandemic becomes endemic.

Effective immediately, the UK government is no longer asking people to work from home.  The COVID pass mandate for nightclubs and large events won’t be renewed when it expires on Jan. 26. And from Thursday, indoor mask-wearing will no longer be compulsory anywhere in England.

The requirement for secondary school pupils to wear masks during class and in communal areas will also be removed from the Department for Education’s national guidance.

Roaring cheers from lawmakers could be heard in the House of Commons following Johnson’s announcements on masks.

People who test positive for COVID-19 and their unvaccinated contacts are still required to self-isolate, but Johnson said he “very much expect[s] not to renew” the rule when the relevant regulations expire on March 24.

“As COVID becomes endemic, we will need to replace legal requirements with advice and guidance, urging people with the virus to be careful and considerate of others,” the prime minister said.

Asked to remove testing rules for vaccinated UK-bound travellers, Johnson said the government is reviewing the testing arrangements on travel and that an announcement can be expected in the coming days.

But he refused to reconsider the vaccination mandate for frontline health care workers, insisting “the evidence is clear that health care professionals should get vaccinated.”

Johnson told MPs that the Cabinet decided to remove its so-called “Plan B” measures on Wednesday morning as data suggest the Omicron wave has peaked nationally, and he attributed stabilising hospital admission numbers to “the extraordinary booster campaign” and the public’s compliance to the restriction measures.

The removal of the “Plan B” measures against the CCP virus came as the prime minister battles increasing pressure calling for him to resign over alleged lockdown-breaching parties in Number 10 Downing Street, the prime minister’s official residence, during the pandemic.

It also came after Number 10 received a petition on Monday signed by more than 200,000 people, calling for an end to vaccine passports and similar COVID certifications.

A separate petition calling on the reversal of vaccine mandates for health care workers, which was also delivered to Number 10 on Monday, received about 160,000 signatures.

Governments in Scotland and Wales have also announced the removal of Omicron curbs, but mandatory indoor mask-wearing and COVID passes will remain in place.