Everyone’s A Conspiracy Theorist, Whether They Know It Or Not

Plutocratic propaganda outlet MSNBC has just run a spin segment on the breaking newsthat the medical examiner’s determination of the cause of Jeffrey Epstein’s death is “pending further information”.

“Our sources are still saying that it looks like suicide, and this is going to set conspiracy theorists abuzz I fear,” said NBC correspondent Ken Dilanian. “NBC News has been hearing all day long that there are no indications of foul play, and that this looks like a suicide and that he hung himself in his cell.”

Dilanian, who stumbled over the phrase “conspiracy theorists” in his haste to get it in the first soundbyte, is a known asset of the Central Intelligence Agency. This is not a conspiracy theory, this is a well-documented fact. A 2014 article in The Intercept titled “The CIA’s Mop-Up Man” reveals email exchanges obtained via Freedom of Information Act request between Dilanian and CIA public affairs officers which “show that Dilanian enjoyed a closely collaborative relationship with the agency, explicitly promising positive news coverage and sometimes sending the press office entire story drafts for review prior to publication.” There is no reason to give Dilanian the benefit of the doubt that this cozy relationship has ended, so anything he puts forward can safely be dismissed as CIA public relations.

When I mentioned Dilanian’s CIA ties on MSNBC’s Twitter video, MSNBC deleted their tweet and then re-shared it without mentioning Dilanian’s name. Here is a screenshot of the first tweet followed by an embedded link to their current one (which I’ve archived just in case): Multiple people briefed on the investigation tell @NBCNews that suicide remains the presumed cause of death. 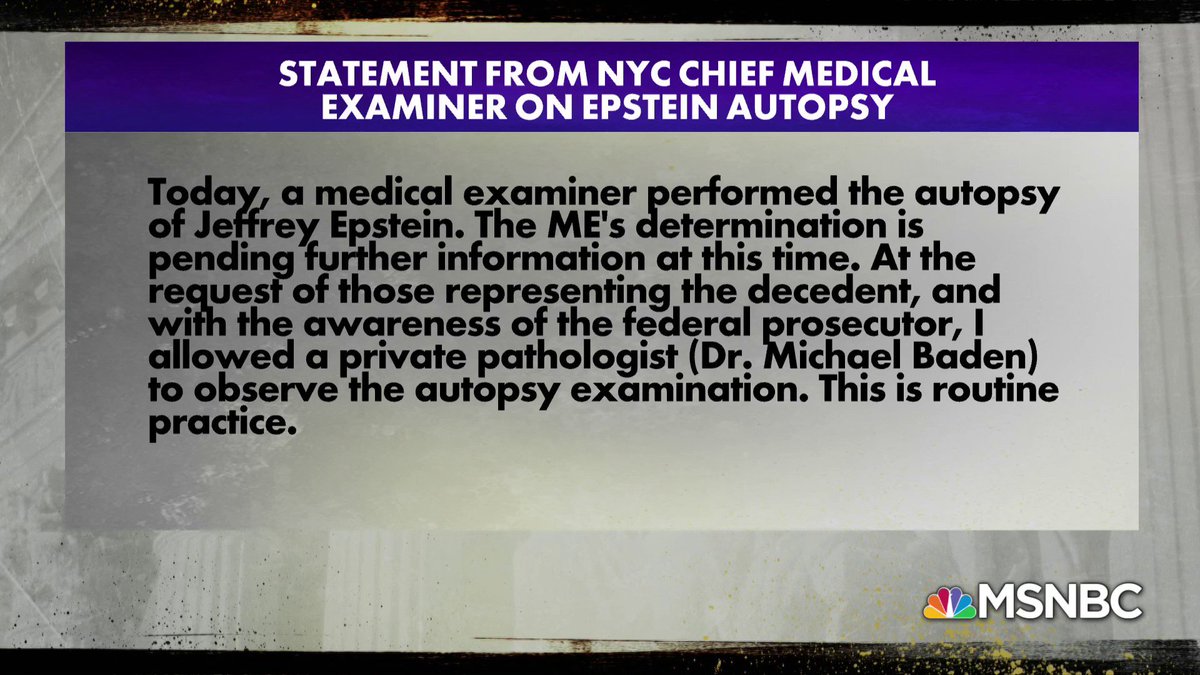 Up until the news broke that Epstein’s autopsy has been unable to readily confirm suicide, mass media headlines everywhere have been unquestioningly blaring that that was known to have been the cause of the accused sex trafficker’s death. This despite the fact that the FBI’s investigation has been explicitly labeling it an “apparent suicide”, and despite the fact that Epstein is credibly believed to have been involved in an intelligence-tied sexual blackmail operation involving many powerful people, any number of whom stood plenty to gain from his death.

So things are moving in a very weird way, and people are understandably weirded out. The response to this from mass media narrative managers has, of course, been to berate everyone as “conspiracy theorists”.

These outlets generally match Dilanian’s tone in branding anyone who questions the official story about Epstein’s death as a raving lunatic. Meanwhile, normal human beings all across the political spectrum are expressing skepticism on social media about the “suicide” narrative we’re all being force-fed by the establishment narrative managers, many of them prefacing their skepticism with some variation on the phrase “I’m not a conspiracy theorist, but…”

“I’m not a conspiracy theorist but there are an awful lot of very powerful people who would like to see this Epstein thing go away. Is anyone investigating the guard on duty?” tweeted actor Patricia Heaton.

“I am not into conspiracy theories. But Epstein had destructive information on an extraordinary number of extraordinarily powerful people. It is not easy to commit suicide in prison. Especially after being placed on suicide watch. Especially after already allegedly trying,” tweeted public defender Scott Hechinger.

I’m not a conspiracy theorist but there are an awful lot of very powerful people who would like to see this Epstein thing go away. Is anyone investigating the guard on duty? #JeffreyEpsteinSuicide

Journalist Abi Wilkinson summed up the silliness of this widespread preface very nicely, tweeting, “’I’m not a conspiracy theorist’ is such a weird assertion when you think about it, the idea there’s a binary between believing all conspiracies and flat out rejecting the very concept of conspiracy in all circumstances.”

Indeed, I think it’s fair to say that everyone is a conspiracy theorist if they’re really honest with themselves. Not everyone believes that the official stories about 9/11 and the JFK assassination are riddled with plot holes or what have you, but I doubt that anyone who really sat down and sincerely grappled with the question “Do powerful people conspire?” would honestly deny it. Some are just more self-aware than others about the self-evident reality that powerful people conspire all the time, and it’s only a question of how and with whom and to what extent.

The word “conspire” is defined by Merriam-Webster as “to join in a secret agreement to do an unlawful or wrongful act or an act which becomes unlawful as a result of the secret agreement”. No sane person would deny that this is a thing that happens, nor that this is likely a thing that happens to some extent among the powerful in their own nation. This by itself is a theory about conspiracy per definition, and it accurately applies to pretty much everyone. Since it applies to pretty much everyone, the label is essentially meaningless, either as a pejorative or as anything else.

The meaningless of the term has been clearly illustrated by Russiagate, whose adherents react with sputtering outrage whenever anyone points out that they’re engaged in a conspiracy theory, despite the self-evident fact that that’s exactly what it is: a theory about a band of powerful Russian conspirators conspiring with the highest levels of the US government. Their objection is not due to a belief that they’re not theorizing about a conspiracy, their objection is due to the fact that a highly stigmatized label that they’re accustomed to applying to other people has been applied to them. The label is rejected because its actual definition is ignored to the point of meaninglessness.

Recently, FBI comes out with absurd notion that conspiracy theories are threats to national security & Esptein is found dead in his cell. But like when Garry Webb who uncovered intelligence collusion in crack cocaine epidemic shot himself in the head – twice! Don’t ask questions

The problem has never been with the actual term “conspiracy theory”; the problem has been with its deliberate and completely meaningless use as a pejorative. The best way to address this would be a populist move to de-stigmatize the label by taking ownership of it. Last month Cornell University professor Dave Callum tweeted, “I am a ‘conspiracy theorist’. I believe men and women of wealth and power conspire. If you don’t think so, then you are what is called ‘an idiot’. If you believe stuff but fear the label, you are what is called ‘a coward’.” This is what we all must do. The debate must be forcibly moved from the absurd question of whether or not conspiracies are a thing to the important question of which conspiracy theories are valid and to what degree.

And we should probably hurry. Yahoo News reported earlier this month that the FBI recently published an intelligence bulletin describing “conspiracy theory-driven domestic extremists” as a growing threat, and this was before the recent spate of US shootings got establishment narrative-makers pushing for new domestic terrorism laws. This combined with the fact that we can’t even ask questions about extremely suspicious events like Jeffrey Epstein’s death without being tarred with this meaningless pejorative by the mass media thought police means we’re at extreme risk of being shoved into something far more Orwellian in the near future.

The best way to get around the internet censors and make sure you see the stuff I publish is to subscribe to the mailing list for my website, which will get you an email notification for everything I publish. My work is entirely reader-supported, so if you enjoyed this piece please consider sharing it around, liking me on Facebook, following my antics on Twitter, throwing some money into my hat on Patreon or Paypal, purchasing some of my sweet merchandise, buying my new book Rogue Nation: Psychonautical Adventures With Caitlin Johnstone, or my previous book Woke: A Field Guide for Utopia Preppers. For more info on who I am, where I stand, and what I’m trying to do with this platform, click here. Everyone, racist platforms excluded, has my permission to republish or use any part of this work (or anything else I’ve written) in any way they like free of charge.