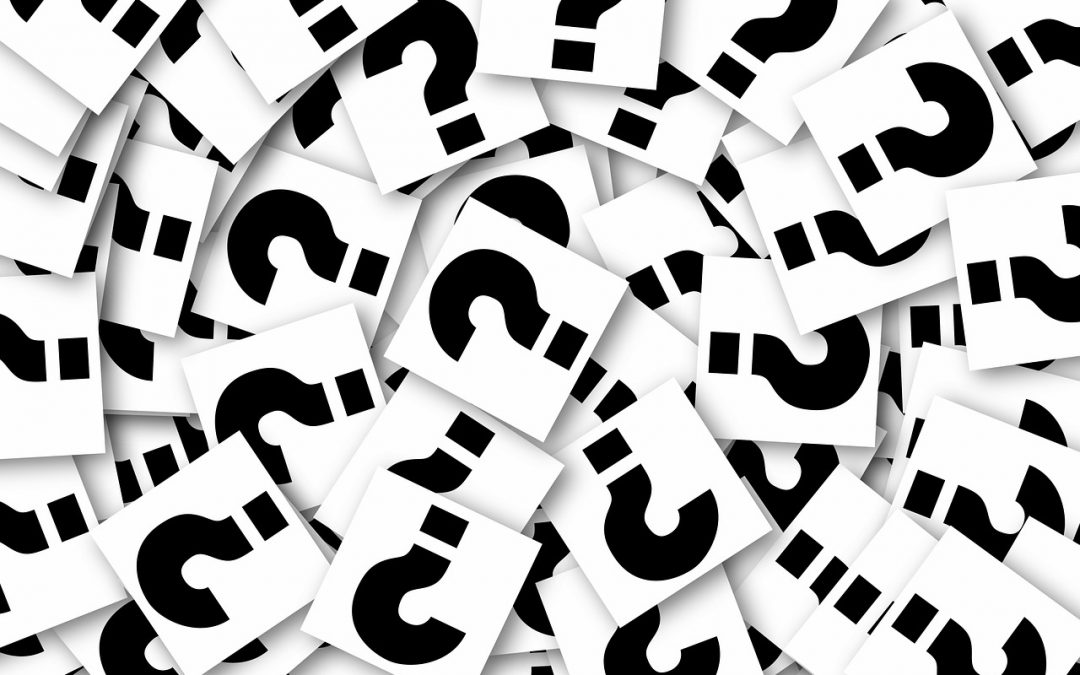 Factism: The Creature from Quantum Reality

What a difference a year makes….

We might seem on the brink of catastrophe on a dozen fronts: COVID, lockdown, nukes, biowarfare, polar meltdowns, the New Abnormal, the New World Order, Civil War 2.020, Agenda 2021, financial collapse, the Russians, China…

Wait, did someone say, “the Russians”? I think we’ve seen that movie before. And didn’t the last series just get cancelled? Oh well, with all this unemployed time at home on our hands, what’s wrong with another rerun?

On that note, let’s check into this blogger’s ruminations a year ago, and compare notes. Even pre-COVID, we saw the face of big-tech-fascism showing itself; we saw the signs of the latest greatest empire teetering toward history; and we glimpsed the antisocial distance between the digital and the real.

No Hope or Hope at Last? 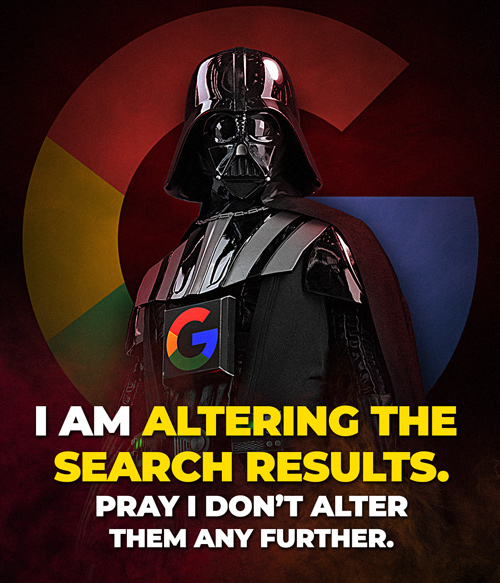 This morning I watched the latest Corbett Report called “The Information War is Over and We Have Lost.” He demonstrates Google’s selective filtering of controversial subjects like “moon hoax” or “vaccination,” directing users to information channels representing only one side of the debate. In a similar strategy, typed-in search terms are completed with suggestions of a slanted nature (“organic… is a lie”). Then there are the outright bans for a variety of views forbidden by the invisible censors of the tech giants (Facebook, Twitter, YouTube, etc.) who arbitrarily ban or block traffic to voices (e.g., antiwar presidential candidate Tulsi Gabbard) they want to muzzle.

Corbett’s conclusion: we are past the point of no return. The information spigot has been commandeered by the powers that be, and the brainwashing of the masses will ratchet forward, unimpeded by informed research or dissenting opinion. Orwell’s dreaded Ministry of Truth has arrived.

Then tonight, at the end of the day, I see an article which takes the chief culprit of the above narrative, the “Last Western Empire”of the last 1000 years, and lays it on death’s doorstep. That’s only the beginning of the good news. Unlike the historic succession of other world empires, the death of this one will invite no successor. Other nations are neither equipped or eager for the task the US will soon be forced to abdicate. Anglo-Zionism, as The Saker calls it, has “reached a terminal stage of decay.” It faces defeat of its fantasy of regime change by fiat (Venezuela), and a new strategic partnership of Russia and China (and other Empire resisters, Iran and Turkey) championing not a conquesting military force but an internationalist paradigm honoring sovereign states.

So is there hope or not? 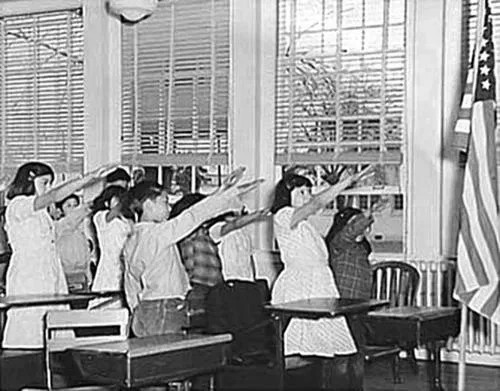 Could it be that we and our children are really seeing the last days of empire… though the supergoons seem intent to the end, on blowing us all up in a fit of dying rage? I’ve seen that movie all my life too, and I go way back, an H=bomb baby.

As for Corbett’s window of information sanity, it always was the case that the patrons of the arts, whether kings or merchants, called the tunes. So it is again with the media masters; we just got spoiled for a while with free access to everything our greedy awakening minds could get our eyes on. Now that we are awake, in such gaudy numbers, the Matrix will not be able to stem the ongoing production of subversive red pills. Lop one off, and nine grow from it. Big Tech will go the way of Hillary Clinton and Joe Biden. The Millennials, and the average Joe in Oklahoma who hacks the Net to tune into Alex Jones, now know too much. Fake trust is broken forever.

But about that iPhone generation? Their greatest test will be to divest.

If their medium of virtual life remains, then its nonhuman message prevails, and we’re in trouble.

We’ll see how the Biden bit works out. Otherwise you might say it’s a case of business as usual this year, in the larger frame of reference—the same old “Great Game” our chess-masters like so much to play because… well, that’s yet to be disclosed. Maybe it’s just addictive. Or something we can blame on a dead man, an Epstein.

COVID-1984, in this larger picture, is another brick in the wall. But it’s starting to look an awful lot like the long-awaited capstone to complete the quest of eons, the pyramid of earthly power.

With that prelude out of the way, it might be time to switch channels… er, swipe screens. New messages need new media: memes for higher consciousness. Thus I present to you… 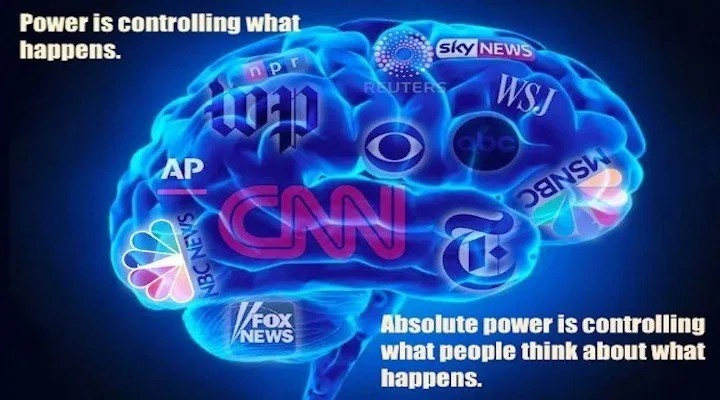 The very near future (heard on gab)

>talking to your friend in your living room. you say the phrase “all lives matter”. your smart tv is listening.

>you try to take uber to get to store a bit later. says there’s a problem with your account. no big deal you think. you’ll just walk.

>you go to whole foods for groceries. “sorry sir your transaction is declined and prime account suspended”.

If memes are what we have left, will they save us from the supergoons? Are they even able to help us awake? They’re still just memes, after all—creatures of the “social” media landscape, which by virtue of being virtual is, in nature’s terms, anti-social.

Have we abandoned nature altogether by now, except for a walk in the park, a kayak skip across a shimmering surface, once in a while? 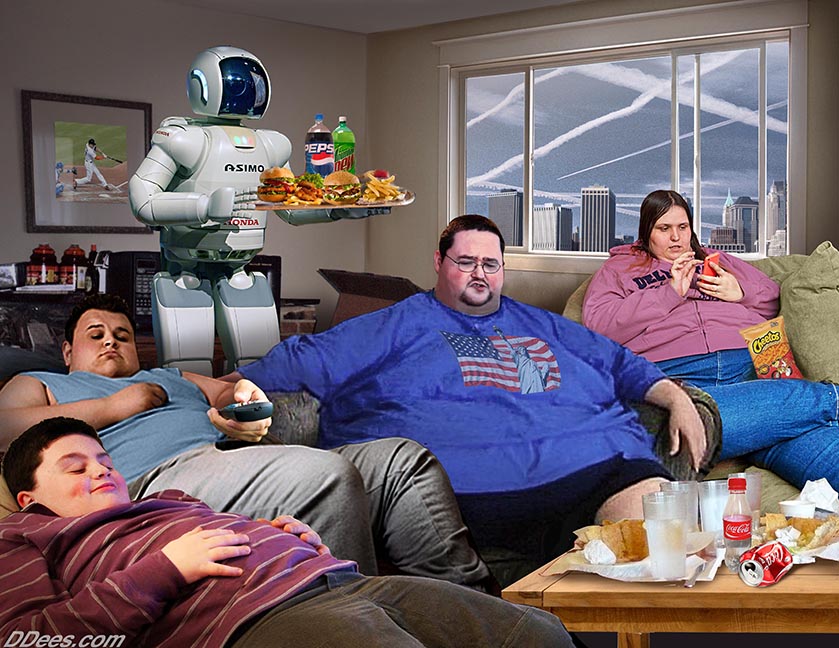 Throw away the phone and we’re still left with words… and empire.

Did the phone give us the power to crack open the walls of power? Perhaps… but beware it wasn’t just an illusion of the great game, a virtual coup having no consequence.

Look in the mirror to see the real. Are we, the blessed avatars of the new evolution, in fact couchbound in the paradise of our own confinement, our days numbered in the padded cells of a prison planet?

Unconvinced by the illusion of safety, I took it upon myself to voice my discontent, on Facebook. Oh, the horror…

The Sheeple of the New Abnormal

It started with the sheep meme, sheep wearing masks. One friend was offended right away and told me to go to hell. I tried to explain that my intention was political, not personal.

Or if it was personal—not about her, per se, but about causing discomfort—then I would take responsibility for the disturbance, daring to shake people from mute compliance.

The argument raises questions of art, of presenting opinions objectively but implicitly taking sides. The viewer’s response depends on how much a person identifies with the image. Take an opposite example, the tinfoil hat. Were I to identify closely with the corresponding nametag, “conspiracy theorist,” I too might be offended, if I wished to be. Or I might simply discount the integrity of the person tagging me with such a broad and tarry brush.

In the case of the sheeple mask, if a viewer takes offense, is that my fault or theirs? Since I didn’t direct it at them personally, they chose to identify as the target. Even so, I if take my fair portion of fault and responsibility, isn’t that the very purpose of art, to hold a mirror to provide a glimpse of self-reflection, painful perhaps but necessary for seeing clearly, for inspiring growth?

So I persisted. I posted another mask meme, but this time an actual box label with the bold print, “THIS PRODUCT… WILL NOT PROVIDE ANY PROTECTION AGAINST COVID-19(CORONAVIRUS) OR OTHER VIRUSES.”

Cue the Fa(s)c(is)t Checker, who stepped in with swift editorial oversight. No matter that I had made no claims of my own about masks in my post. The censor’s box read, “This information is factually inaccurate. Conclusion: False.” 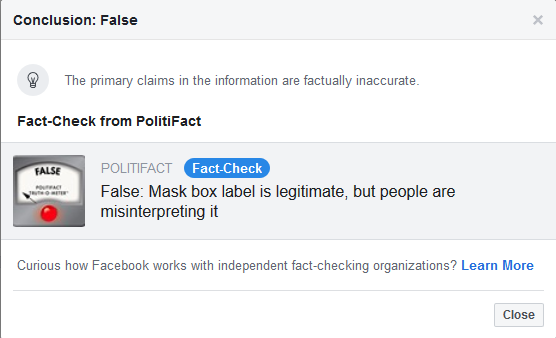 Helpfully, the so-called “independent” Fa’c’t Checker goes on to explain, “Mask box label is legitimate, but people are misinterpreting it.”

Folks, this is a revelation. It signals we have already entered a post-reality landscape, where any fact can now be declared taboo if any yahoo might take it the wrong way. This gets back to the sheep mask thing. Someone feels offended, you’re guilty. In this case the “false information” is actually admitted to be true but that doesn’t matter; interpretation trumps reality. In such a world no fact is ever safe again. Orwell himself was no match for this new level of doublespeak and pre-thought control.

The actual mask and its purported purpose is beside the point; what matters now is that one can no longer speak freely; we are effectively muzzled. If you use the word womanyou are sexist. If you use the word blackyou must be racist. If you use the word whiteyou are tagged BLM. If you tell a joke beginning, “A seventy-year-old man walks into a bar…” you’re really in trouble: ageist, genderist, culturalist. Language is reduced to cryptic code, a kind of engineered virtual DNA, signaling survival or exile. If you’re the president of a small African country (Burundi) and you question the COVID narrative, you might suddenly suffer a fatal heart attack.

Factism is the new Fascism. Welcome to the Brave New Abnormal, the world of Quantum Reality. Where the subjective reflections of a given fact overwhelm the fact itself, helpless as a particle in a wave of change. Where the timelines of possible futures all converge into one singular outcome of global consensus, programmed to self-correct on all channels. Where self-replicating opinions of respondents overwhelm former bodies of evidence, themselves removed to archives if lucky enough to survive targeted deletion. Truth is relative, to what the experimental controller determines to measure. “Reality is what we say it is.” 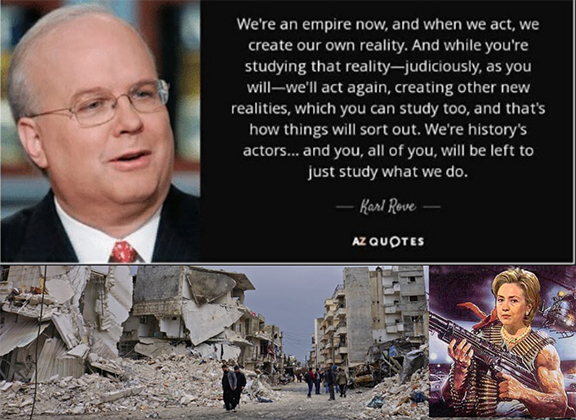 Visit NowickGray.com for more writings: edgy narratives that explore the borders of imagination and reality, choice and manifestation, freedom and structure, desire and limitation, nature and civilization.