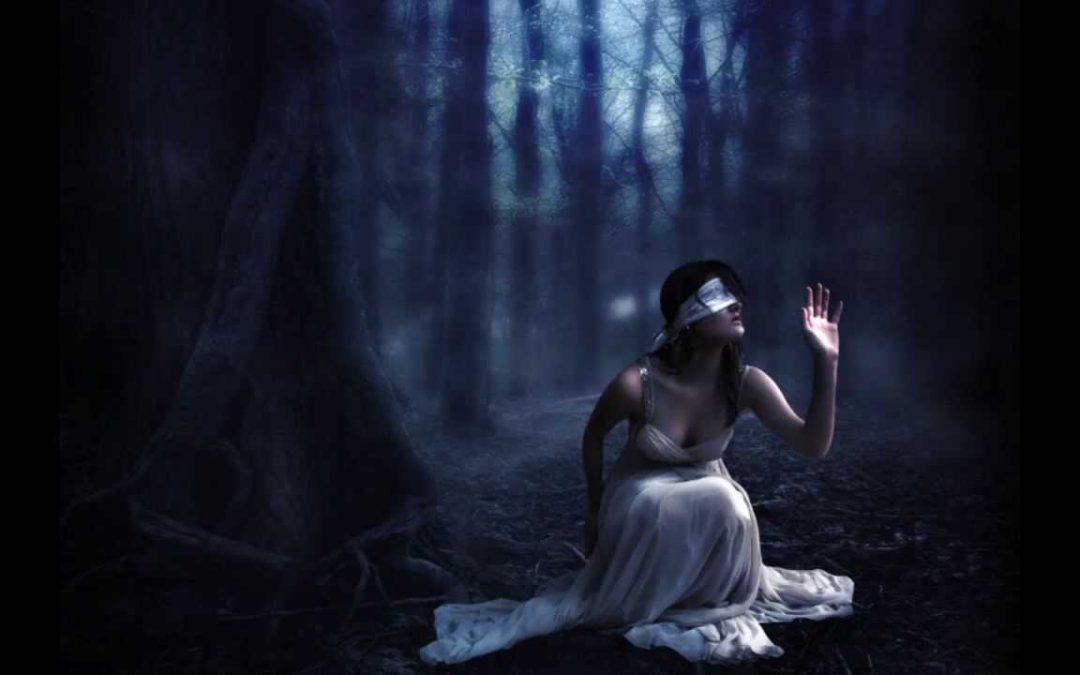 Transcript (of the video found at the end)

Why does history keep repeating itself? Why can’t mankind get its act together and put an end to physical, financial, and spiritual slavery? Maybe it’s because every attempted solution has failed to address some very fundamental human weaknesses. Until these critical flaws are overcome, change will remain superficial as the old problems keep resurfacing.

The first weakness is that our perception is limited to only the five physical senses. In being unable to see anything beyond the material universe, we are lured into emulating its ways, into acting like animals or machines even though at the core we are spirit.

It also blinds us from seeing our occult enemies and the nonphysical control structures and energies that they employ. Like an iceberg, most of the Matrix Control System is hidden from view. For that reason, humans are like puppets being pulled by invisible strings.

Sooner or later, mankind must develop clairvoyant powers. Through proper esoteric training, it will become possible to perform miraculous healing, remote viewing, psychic self-defense, perception and removal of etheric parasites, precognition, telekinesis, probability influencing, telepathy, and quick detection of agent saboteurs. Imagine how significantly this would level the playing field. If we could see beyond the flesh, it would be game over for those psychopaths driven by alien and demonic forces.

But for now, mainstream institutions don’t even believe in extrasensory perception, let alone try to develop it. You never hear it mentioned by social or political movements either, which goes to show just how deeply our society has been had by the Control System.

Our second weakness stems from science staying firmly in the realm of physical matter, physical energy, 3D space, and linear time. This holds back the necessary revolutions in technology that would overcome scarcity and environmental destruction. Our primitive technology also makes Earth physically defenseless against alien forces, giving them the strategic upper hand.

Therefore we must move toward a higher type of science that makes use of energies and principles still unexplored by the orthodox. Examples include scalar physics and demiurgic technology, which employ zero point energy, longitudinal electromagnetic waves, force-free gauge potentials, and etheric energy to accomplish the seemingly impossible. They would allow for free energy, antigravity, invisibility, and time travel. Without such technology, the human race will continue being preoccupied with physical survival, competition over dwindling resources, and dependence on the few who control these resources.

Our third weakness is ego, the mental parasite that keeps us emotionally invested in the Matrix. It is a foreign installation, grafted upon the soul through genetic imprinting and social conditioning. Ego functions as a mortal personality worn by spirit in order to operate smoothly within the Matrix, though at the risk of getting lost within it. When Spirit, the core of our being, over-identifies with Ego, it takes on its weaknesses and forgets its own purpose. The rider then becomes the horse and can be easily lead by the reigns. So long as the Ego rules our choices, we will always be acting in ways that reinforce the Matrix.

We must overcome the tyranny of the Ego and establish a personal connection with Spirit, with the higher Self. This can be done by recognizing what stems from the Ego, what stems from the higher Self, and through discipline and introspection always following the higher. Through consistent identification with the higher, it grows in influence over the lower. It becomes more firmly anchored within us until igniting like a star into full manifestation. We can augment that process through a cultivation of intuition, meaningful dreams, synchronicity, and deep contemplation. We can increase the clarity of the connection by nurturing noble feelings such as compassion, beauty, understanding, love and empathy. Without a connection to Spirit, we remain wanderers without compasses and lamps without fire, lost in the darkness as so many currently are.

The fourth weakness is ignorance, stupidity, and naiveté, which keep us from making informed decisions. Deception succeeds only when invited in by lack of awareness. Mankind’s problem is not so much the forces who seek to control it, but the scourge of public ignorance that sustains and regenerates these forces.

Therefore we must increase awareness through a combination of study, observation, experience, contemplation, and most of all revelation. This requires a deep love for truth and learning. We must train our intellects without compromise and become very familiar with logical fallacies and the spiritual warfare strategies used against us. The intellect is not something to throw away in favor of the heart, rather both should be developed in parallel and brought to perfection. The more informed we are, the smarter our decisions. And the smarter our decisions, the better our future.

And the fifth weakness is humanity’s unquestioned faith in consensus reality. Consensus reality is the way mainstream society perceives the world, the way it works, what every individual must do to survive in it, what is permissible and what is impossible. It is the map drawn by the Matrix to chart our course through life. We are taught to assume that the rules and limitations of the many apply to us without exception.

We must disentangle ourselves from consensus reality. This will only happen when we begin living by the principles of a secret divine reality that exists around and within us. Which jurisdiction you enter depends on where you are positioned on the sliding scale between Ego and the higher divine Self. It depends on where you place your root assumptions, your emotional center point, or your mental dwelling point. By entering the jurisdiction of the higher, we overcome the authority of the lower. What the mainstream deems foolish, risky, or impossible then becomes the norm. Anomalies and miracles become the new reality. The only way to beat a rigged game is to play by a different set of rules.

These unquestioned vulnerabilities all stem from the same fundamental problem, that of spirit being overcome by the darkness of the material universe. The transcendence we seek is not about escape and avoidance, it is about the mastery of the higher over the lower. The real solutions are rooted in the “above” whereas the weaknesses arise from “below.” We cannot defeat the “below” using only the tools and methods of the “below.” Attempting to do so merely replaces one Control System with another. And that is why all human revolutions, social experiments, and utopian attempts have failed, for they have ignored the fundamental problems I have outlined.

These weaknesses reinforce each other. Where three are overcome, the other two eventually produce defeat. All must be overcome together if mankind is to permanently secure its freedom. If the human race as a whole cannot do it, maybe the rest of us can. We shall accomplish it through the mastery of spirit over the mind, and mind over matter.

(YouTube | MP3) Seven signs that your soul resonance has shifted to a higher or lower state.

(YouTube | MP3) Synchronicities are meaningful coincidences or improbabilities sent to you from behind the veil of reality. Find out what they mean and what causes them.

28 May, 2016 – Hyper-Dimensional Interference and the Keys to Discernment

(YouTube) How consciousness influences reality on the quantum level. The nature of synchronicity & its workings. Timeline dynamics – how our present decisions effect the PAST as much as the future! How the Law of Attraction really works. Polarization of consciousness, and more.

(Youtube | Transcript) This episode reveals the hidden alien interference that can be sneaking through the backdoor of your mind. Tom and Sienna discuss how even though we are told by many new age teachings that we are creating our own reality until we are fully aware of hidden alien and demonic influences many of us remain unwitting puppets for other dimensional forces. This episode dives deeper into the covert machinations that currently maneuver unconsciously through billions of unsuspecting souls.

(Youtube | Transcript) In this episode Sienna and Tom take a look at whose hands are on our steering wheel, and what we can do to take charge of our lives. Tom shares some of his alien encounters, and they break down the demiurge control grid, and how we can be recruited into serving it through our shadow selves. Methods used by alien races to enslave us are discussed and what we can do about it. Ways to discern through the Laws of Attraction are also explored, along with a path to true sovereignty.

(Youtube | Transcript) Part 1 of a three part series with aimed at helping us wise up to our true nature and to the reality of alien interference on this planet and in each of our lives.

(YouTube | Transcript) How Spirit and the Divine Realm triumph over Matter and the Matrix Control System.

(YouTube | Transcript) The fundamental flaws that keep humanity in the dark.

(Youtube | Transcript) The five components of the Matrix Control System.

(MP3 44.7MB, 74 min) Hidden nature of the alien presence, their origins, their capabilities, common types of activities, spectrum of alien types from terrestrials to ultraterrestrials, Nordic aliens, non-humans and hybrids embedded in our population.