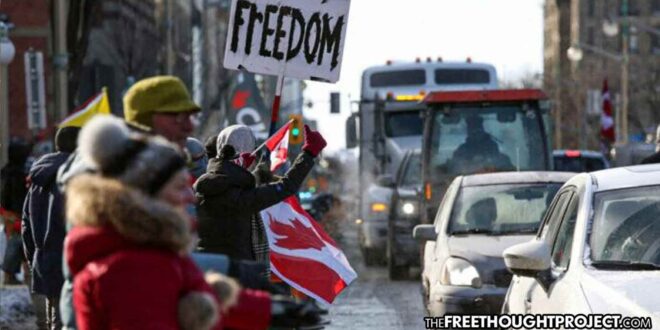 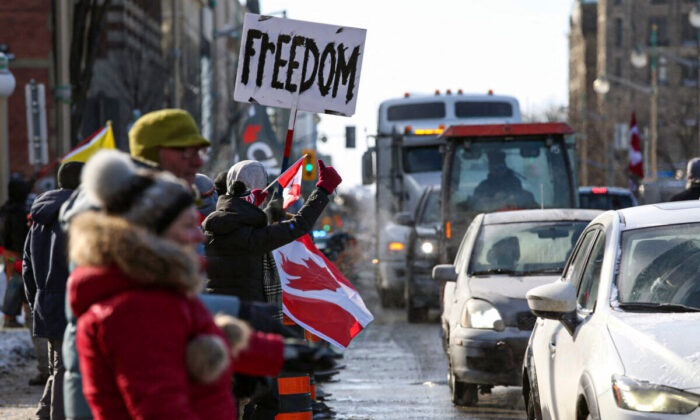 Supporters of the Freedom Convoy protest against COVID-19 vaccine mandates and restrictions in front of Parliament of Canada, in Ottawa, Canada, on Jan. 28, 2022. (Dave Chan/AFP via Getty Images)

Following the lead of Canadian truckers in Ottawa, a growing number of trucker-inspired protests appear to be gaining momentum worldwide—with groups forming in the Netherlands, Austria, the United States, the UK, Australia, and New Zealand.

The Ottawa protest, known as the “Freedom Convoy,” aims to do away with Canadian COVID-19 vaccine mandates that affect truckers working between the United States and Canada. On Feb. 6, the mayor of Ottawa declared an emergency, while police started making arrests and seizing the truckers’ fuel.

In New Zealand, truckers reportedly launched a convoy from both the North and South Islands. They are slated to converge at the country’s capital, Wellington, according to the New Zealand Herald.

One of the truckers, who only called herself Jess, told the Toronto Star that she is attempting to organize a trucker protest in New Zealand, which has some of the strictest COVID-19 restrictions in the world, because “her country needed to hear the call to stand up.”

She confirmed that after communicating with truckers via social media the two groups will converge on Wellington in the near future.

“I think you’re starting to see what will become a big global movement to end these mandates,” Brian Brase, co-organizer of the U.S. protest, told Fox News on Feb. 6, referring to vaccine requirements. “It’s a violation of your human rights to be mandated to take this vaccine. If you want it, go get it, but being mandated to get it, we’re standing up against that. We think it’s wrong.”

Last week, organizers of a U.S. freedom convoy criticized Facebook after the social media platform removed a page organizing protests against mandates. The truckers told Fox News that they were planning to drive from California to Washington, D.C.

Truckers in the United Kingdom also will demonstrate against mandates in a Glasgow, Scotland, suburb and will drive to Edinburgh, the capital, before heading to London, organizers told the Scottish Daily Express newspaper. Freedom Convoys will also depart in the English cities of Manchester, Exeter, Bristol, and Bournemouth, as well as in cities in Ireland, Northern Ireland, and Wales.

In the Netherlands, according to the local NL Times, dozens of trucks and other vehicles gathered in Leeuwarden to protest local COVID-19-related mandates and restrictions on Jan. 30. A video posted by the “Freedom Convoy Nederland” showed the group.

Elsewhere in Europe, Aram Lemmer, a business owner and organizer in Austria, told the outlet that he got commitments from about 2,500 vehicles to drive to Vienna, the capital, to protest against mandates. Recently, Austria passed a law that will mandate vaccinations for all eligible people aged 18 and older or they’ll face hefty fines.

Meanwhile, police in the Australian Capital Territory say they expect crowd sizes for the “Convoy to Canberra” to peak on Feb. 8 when Australia’s Parliament resumes. Protesters led by truckers are expected to gather outside Parliament House.

In Canada, Ottawa Mayor Jim Watson declared a state of emergency on Feb. 6, asserting that the trucker protest poses a “serious danger.” Protest organizers say their movement is peaceful.

“IMPORTANT: Anyone attempting to bring material supports (gas, etc.) to the demonstrators could be subject to arrest. Enforcement is underway,” Ottawa police also said in a statement on social media.

The decision was panned by the Justice Centre for Constitutional Freedoms, a group that represents the truckers.

“In a free and democratic society that is governed by the rule of law, citizens can freely associate with each other, including the giving and receiving of goods and gifts. There is no law that would allow the Ottawa Police to arrest people for giving fuel or food to another Canadian,” Justice Centre for Constitutional Freedoms lawyer Nicholas Wansbutter said in a statement.