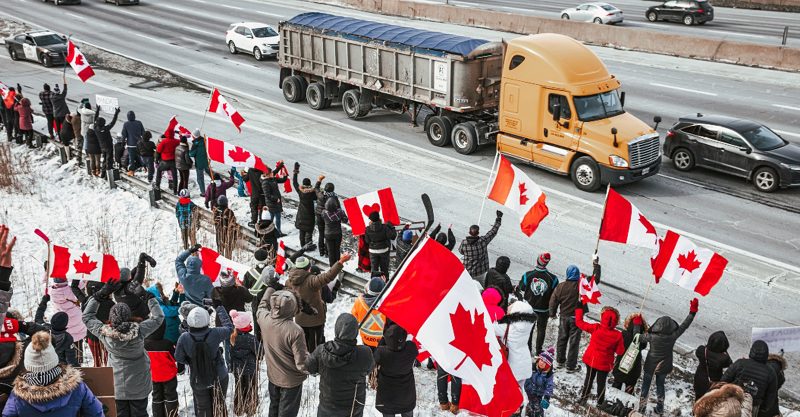 Hundreds of truckers and thousands of citizens protesting Canada’s vaccine mandates for truckers remain in Ottawa, vowing to stay until the mandates are lifted.

Thousands of truckers and others protesting Canada’s COVID vaccine mandates remained in Ottawa today, vowing to stay put until the mandates for truckers are lifted.

Ottawa’s police chief, Peter Sloly, said Monday, “all options are on the table, from negotiation through enforcement” to bring the protest, now entering its fifth day in the nation’s capital, to an end.

The “Convoy for Freedom” set out from British Columbia on Jan. 23 and arrived in Ottawa on Jan. 29. 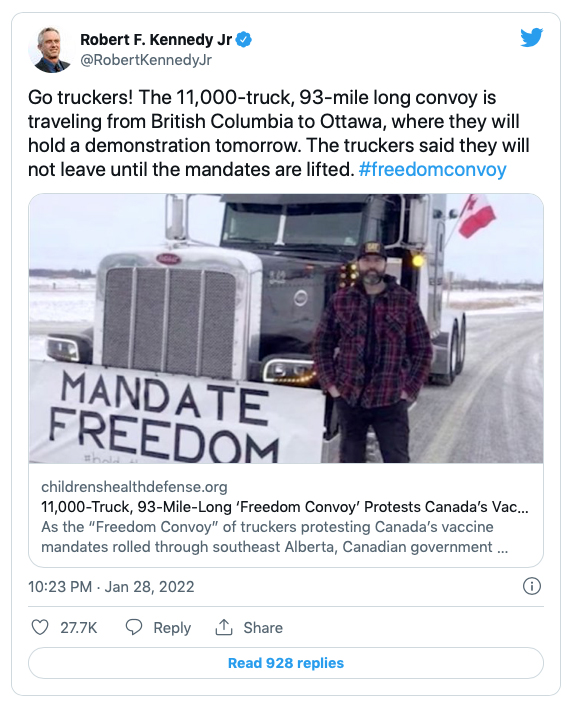 According to RT News, the organizers of the protest initially estimated 1,600 trucks, a number that grew to 36,000 trucks, and later closer to 50,000. However, national media outlets and law enforcement reported anywhere from “hundreds” of trucks to figures in the low thousands over the past week.

Prime Minister Justin Trudeau on Monday said he would not meet with the protesters because he does not believe in their goals.

“I have also chosen not to go anywhere near protests that have expressed hateful rhetoric, violence toward fellow citizens, and a disrespect not just for science but the frontline health workers and 90% of truckers who have been doing the right thing to keep Canadians safe and put food on our table.”

Trudeau on Monday also announced he tested positive for COVID, despite being fully vaccinated and boosted, and remains in an undisclosed location due to security concerns. 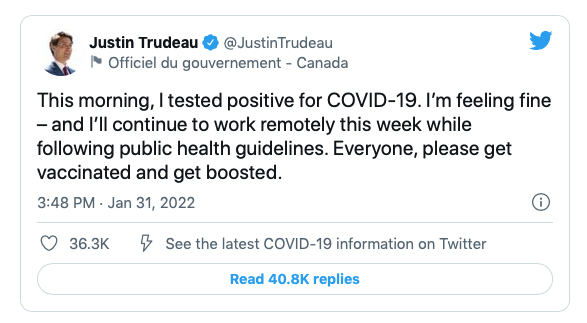 According to the prime minister’s Twitter account, he was fully vaccinated and received a booster shot on Jan. 4. 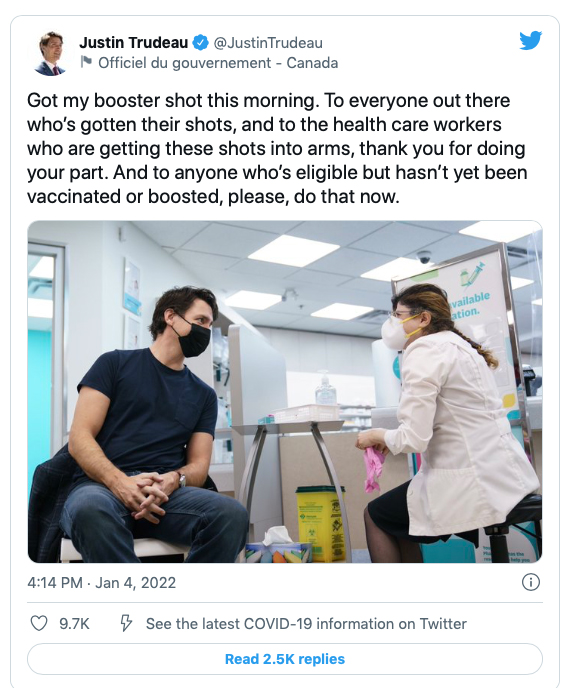 Protests ‘largely peaceful,’ with some reports of vandalism

Early reports portrayed the demonstrations as mostly peaceful, with Reuters reporting “police said most demonstrators have been peaceful,” and The New York Times describing the protest as loud, but largely peaceful.

Canada’s CTV News late Monday reported police indicated there had been “no riots, no injuries, no deaths,” but said they had 12 investigations underway into various allegations, including bribery, threats, assault and dangerous driving.

Representatives of the Freedom Convoy said the protest is peaceful, but Canada’s mainstream media, which is 70% funded by the government, told a different story.

Gord Magill, a trucker for more than 25 years and participant in the convoy, slammed mainstream media coverage of the protest. Magill said the media zeroed in on a couple of protestors who don’t represent the views of the truckers.

In an op-ed published in Newsweek, Magill wrote:

“ … tarring a demonstration that drew in excess of 100,000 people as racist and full of fringe extremists based on the actions of two people is quite a reach, proof of nothing so much as the fact that the media is clutching at straws to smear us—which are in short supply.”

Travis Smith, an associate professor of political science at Concordia University in Montreal attended the protest and later wrote:

“Despite temperatures around -20C, I saw and met many women and men, from across the political spectrum, from disparate socioeconomic backgrounds, French- and English-speaking alike, young and old, vaccinated and unvaccinated, gathered to donate their time and the fruits of their culinary talents, such as hot bowls of chili and fresh baked goods, plus sandwiches, snacks, and beverages for the road.

“They delivered additional items donated by people who couldn’t make it in person, helped to shuttle people around, and offered what other assistance they could — including offers of accommodations or a place to take a hot shower.”

“After a night of protests, Canadians band together to ensure the streets are cleaned up. The world is watching. Keep it peaceful, keep it powerful, keep it Canadian.”

In another video, a trucker explained how he went to bed at midnight and woke up in the morning with a truckful of food. There were more than 50 boxes of food with multiple packages inside with notes thanking the truckers for standing up for the freedom of Canadians.

“It’s just awesome to be part of the fringe minority,” the man said, referring to a commentTrudeau made last week where he called the protestors a fringe minority with unacceptable views.

The truckers won support from Elon Musk who spoke out publicly in support of their cause.

On Sunday, Musk replied to a tweet showing a video of protesters in Ottawa.

“It would appear that the so-called ‘fringe minority’ is actually the government,” he wrote.

Musk also tweeted a photo showing dozens of trucks lining a highway with the caption, “Taking a break from politics for a while. Here’s a nice photo of trucks.” 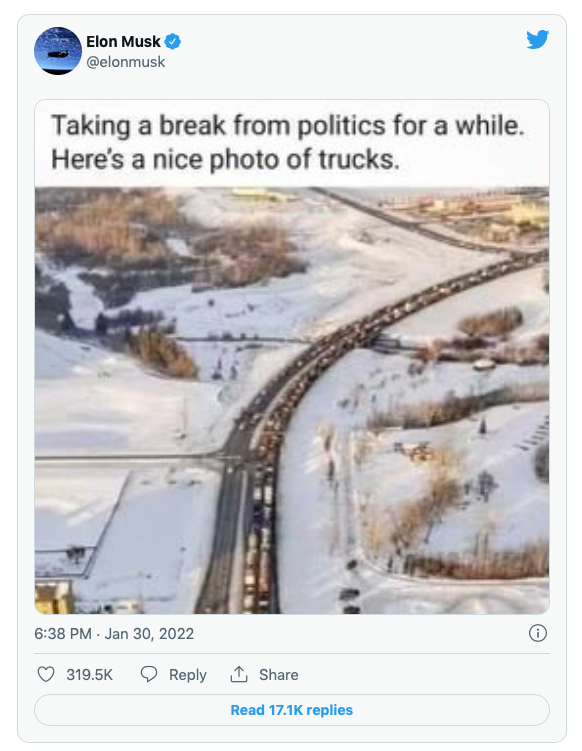 Convoy has enough funds for 4 years

As of today, the Freedom Convoy had raised more than $7.6 million ($9.7 million CAD) in donations and said they have enough funds to keep trucks there for up to four years, Newsweek reported.

Slawek Pietraszek, 43, said he plans to stay in Ottawa as long as he needs until a resolution is reached. Petraszek, a trucker who did not disclose his vaccination status, wants the government to agree to repeal all vaccine mandates.

“My fourth child was born this past Saturday, I’ve decided I need to do this for my family,” he said.

Dave Ridell, 59, has been transporting his grains by truck for the last 30 to 40 years. Ridell is concerned “government overreach has gotten out of hand, and politicians need to be held more accountable for what they are doing and the impact vaccine mandates are having on people.”

Ridell said truckers were once considered heroes along with other frontline workers, but the mandate on truckers cast aside many who “worked through the harder moments.”

Ridell, who didn’t disclose his vaccination status, hopes the Freedom Convoy will lead to all vaccine mandates being lifted.

“The amount of people who are unemployed because it’s their personal choice whether they want to be vaccinated or not, it’s not fair, just totally unfair,” he added.

This is the second time Moe made a public comment about the potential removal of the provincial proof of vaccination policy. Earlier in the week, he said in an interview with John Gormley from CJME/CKOM radio that he thought requiring proof of vaccination had “for the most part run its course.”

“It increased our vaccination rates tremendously, but I think we’re getting to a point now where those that are not vaccinated likely aren’t going to get vaccinated,” Moe said.

According to the premier, the province needs to “have a discussion” about proof-of-vaccination requirements “sometime this month.”

As of Jan. 15, the Canadian government required all truck drivers entering Canada from the U.S., regardless of citizenship, to be fully vaccinated against COVID. Any driver who cannot show proof of vaccination will be denied entry and placed in quarantine for two weeks.

The U.S. government implemented the same policy last week on the American side of the border, which could potentially sideline 26,000 to 160,000 drivers who make regular trips across the Canada-U.S. border.

Inspired by the convoy, Australian truckers are driving to Canberra to protest vaccine mandates, as Victoria’s premier has warned COVID booster doses soon will be mandatory.