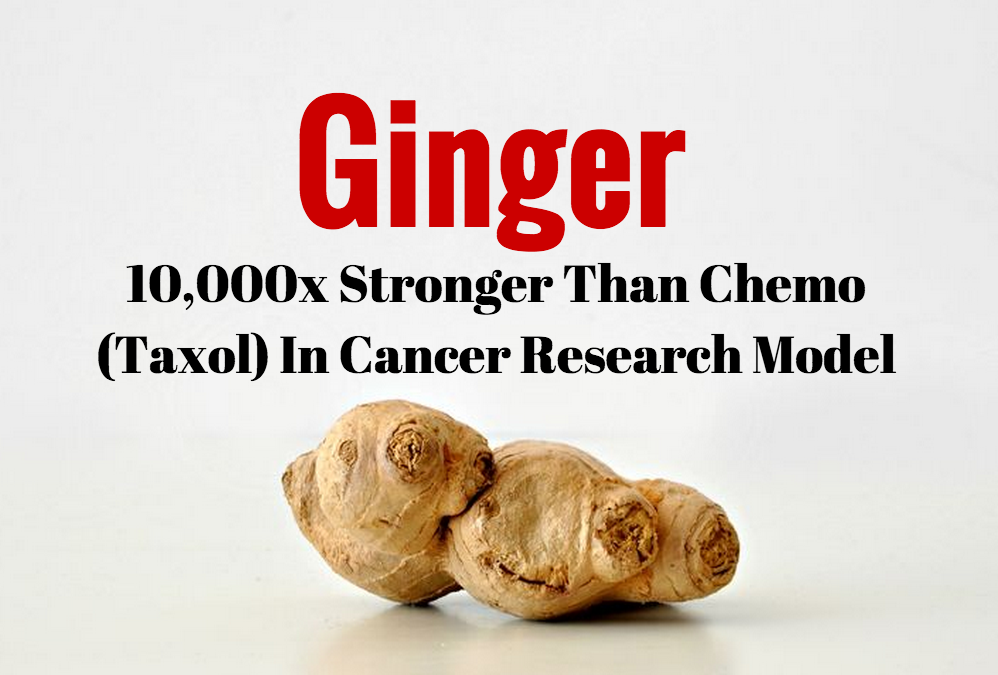 Posted on:Tuesday, August 27th 2019 at 6:00 am
Written By Sayer Ji, Founder
This article is copyrighted by GreenMedInfo LLC, 2019
Visit our Re-post guidelines

A provocative study reveals ginger contains a pungent compound that could be up to 10,000 times more effective than conventional chemotherapy in targeting the cancer stem cells at the root of cancer malignancy

A study published in PLoS reveals a pungent component within ginger known as 6-shogaol is superior to conventional chemotherapy in targeting the root cause of breast cancer malignancy: namely, the breast cancer stem cells.

As we have discussed in greater detail in a previous article titled, “Cancer Stem Cells: The Key To Curing Cancer,” cancer stem cells are at the root of a wide range of cancers, not just breast cancer, and are sometimes referred to as “mother cells” because they are responsible for producing all the different “daughter” cell types that makeup the tumor colony. While cancer stem cells only constitute between .2 and 1% of the cells within any given tumor, they have the seeming “immortal” ability to self renew, are capable of continuous differentiation, are resistant to conventional chemotherapeutic agents, and are tumorigenic, i.e. are capable of “splitting off” to create new tumor colonies. Clearly, the cancer stem cells within a tumor must be destroyed if cancer treatment is to affect a lasting cure. The study titled, “6-Shogaol Inhibits Breast Cancer Cells and Stem Cell-Like Spheroids by Modulation of Notch Signaling Pathway and Induction of Autophagic Cell Death,” identified powerful anti-cancer stem cell activity in 6-shogaol, a pungent constituent of ginger produced when the root is either dried or cooked. The study also found that the cancer-destroying effects occurred at concentrations that were non-toxic to non-cancerous cells – a crucial difference from conventional cancer treatments that do not exhibit this kind of selective cytotoxicity and therefore can do great harm to the patient.

The authors of the study further affirm these points:

Cancer stem cells pose serious obstacle to cancer therapy as they can be responsible for poor prognosis and tumour relapse. To add into the misery, very few chemotherapeutic compounds show promise to kill these cells. Several researchers have shown that cancer stem cells are resistant to paclitaxel, doxorubicin, 5-fluorouracil, and platinum drugs [8, 16]. CSCs are thus an almost unreachable population in tumours for chemotherapy. Therefore any compound, that shows promise towards cancer stem cells, is a highly desirable step towards cancer treatment and should be followed up for further development.”

The researchers identified a variety of ways by which 6-shagoal targets breast cancer:

It was in evaluating the last mode of 6-shagoal’s chemotherapeutic activity and comparing it to the activity of the conventional chemotherapeutic agent taxol that the researchers discovered an astounding difference. Whereas taxol exhibited clear cytotoxicity in the one-dimensional (flat) monolayer experimental model, it had virtually no effect on the spheroid model, which is a more “real world” model reflecting the 3-dimensionality of tumors and their stem cell subpopulations. Amazingly, this held true even when the concentration of taxol was increased by four orders of magnitude:

In contrast [to 6-shagoal], taxol, even though was highly active in monolayer cells, did not show activity against the spheroids even at 10000 fold higher concentration compared to 6-shogoal.”

This is a highly significant finding, as it affirms a common theme in cancer research that acknowledges the primarily role of cancer stem cells: namely, while conventional techniques like surgery, radiation, and chemotherapy are effective at reducing a tumor’s size, sometimes to the point where it is “debulked,” burned,” or “poisoned” out of the body even below the threshold of re-detection, the appearance of “winning the battle” often comes at a steep price, as ultimately the cancer stem cell population regrows the tumors, now with increased vengeance and metastastic invasiveness, resulting in the cancer “winning the war.”

The monolayer model, which does not account for the complex immunity of actual cancer stem-cell based tumors against chemoagents like taxol, represents the old preclinical model of testing cancer treatments. The spheroid model, on the other hand, clearly shows that even 10,000 times higher concentrations of taxol are not capable of beating this ginger component at selectively targeting the root cause of the tumor malignancy. In their concluding remarks, the authors point out a hugely important distinction between natural anti-cancer agents and conventional ones that have only been introduced in the past half century or so, namely, “Dietary compounds are welcome options for human diseases due to their time-tested acceptability by human bodies.”

Unlike modern synthetically produced and patented chemicals, ginger, curcumin, green tea, and hundreds of other compounds naturally found in the human diet, have been “time-tested” as acceptable to the human body in the largest and longest running “clinical trials” known: the tens of thousands of years of direct human experience, spanning thousands of different cultures from around the world, that constitute human prehistory. These experientially-based “trials” are validated not by RCTs, or a peer-reviewed publication process, but by the fact that we all made it through this incalculably vast span of time to be alive here today. Consider also that if our ancestors made the wrong dietary choice by simply mistaking an edible berry for a poisonous one, the consequences could be deadly. This places even greater emphasis on how the “time testing” of dietary compounds was not an academic but a life-death affair, and by implication, how the information contained within various cultural traditions as “recipes” passed down from generation to generation are “epigenetic inheritance systems” no less important to our health and optimal gene expression as the DNA in our own bodies.

Ultimately, this new study adds to a growing body of research indicating that cancer stem cell targeting approaches using natural substances present in the human diet for thousands of years are far superior chemotherapy and radiation, both of which actually increase the relative populations of cancer stem cells versus non-tumorigenic ones. For further reading on ginger’s anti-cancer properties, consult our Ginger Research database. Also, you can use our Cancer Research Health Guide for thousands of studies and articles about natural healing approaches for cancer.