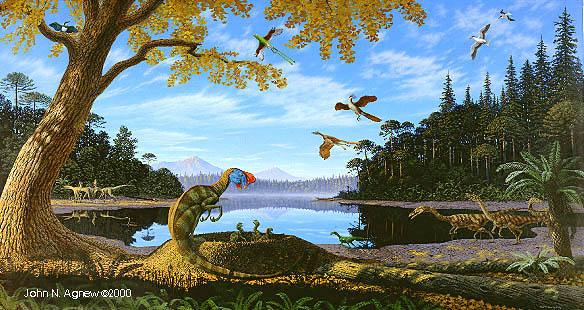 Those interested in learning how to enhance their longevity may want to look to Gingko Biloba, whose very existence today as a “living fossil” speaks volumes to its ability to survive conditions that would otherwise kill or dramatically shorten the lifespan of most other species.

There is a thread of biological immortality woven into all things that are living. Anything that breathes or pulsates with life today contains within its germline genetic information that originated from a last universal common ancestor (LUCA), and from which all living things — plants, bacteria, fungi and animal included — descended. While somatic cells within multicellular organisms perish, their germline stem cells are capable of infinite self-replication, which in the case of gingko biloba, has been going on for at least a quarter of a billion years.

Ginkgo biloba is the world’s oldest living plant, and is known as a “living fossil” because it has no close living relatives, and appears to be the same as a plant species dating back 270 million years (Permian) in the fossil record. It is also one of a rare few (6%) dioecious flowering plants, meaning it has distinct male and female organisms.

Not only has this exceptionally hardy species survived three mass extinction events over the past quarter of a billion years, but it was found to be the only surviving plant species near the epicenter of the August 6th, 1945 Hiroshima atomic bomb blast.  In September 1945, the area around the blast center was examined and six Gingko biloba trees were found standing. They budded shortly after the blast without major deformations and are still alive to this day. To learn more about the Hiroshima Ginkgo trees visit  The Ginkgo Pages. Interestingly, the same plant that survived exposure to a wide range of radioisotopes released by nuclear blast, including radioiodine-131, is capable of conferring radioprotective properties to humans exposed to at least one of the same elements. Graves’ disease patients receiving radioiodine-131 therapy, which is known to cause chromosomal damage, have been found to benefit from receiving a gingko biloba supplement before treatment by experiencing reduced damage to their DNA.

You can view the study published in 2007 in the  Journal of Clinical Endocrinology and Metabolism  here.

Ginkgo not only has a reputation for longevity, with some plants living to over 1,000 years, but it appears willing to confer longevity to those who use consume it extracts of it.

Indeed, a solid body of preclinical and clinical research indicates that it is useful in age-associated cognitive decline, e.g.  Alzheimer’s disease, dementia, as well as age-associated visual disturbances such as glaucoma. There is also indication that it may slow the aging process within the mitochondria of cells by reducing oxidative stress and enhancing mitochondrial respiration,[i] and this mitochondrial anti-aging effect is not limited to neurons, but extends to other cell lineages such as blood platelets,[ii]  and fibroblasts,[iii]  liver cells,[iv]endothelial cells,[v] heart cells[vi] and likely many others yet to be investigated.

One of the most encouraging studies on gingko biloba, which we explored in a previous article, Declaring Chemical Warfare Against Alzheimer’s, showed that it was more effective than the blockbuster alzheimer’s drug donepezil for treating symptoms of mild-to-moderate Alzheimer’s disease.

What is even more remarkable is that this plant has been shown capable of articulating over 30 different beneficial physiological actions that may be of therapeutic value in over 100 health conditions. Those conditions in the “A” group are listed below:

To view the list of all 100+ potential medical applications, from A-Z, visit the GreenMedInfo.com Ginkgo Biloba research page. Or, to acquire the entire downloadable document, including over 100 hyperlinks to the National Library of Medicine’s original citation location, go here:  Downloadable Document – Ginkgo Biloba.

A word of caution for those who wish to use ginkgo biloba. Its seeds contains physiologically significant levels of a naturally occurring neurotoxin known as ginkgotoxin (4′-O-methylpyridoxine), which as an antivitamin is structurally related to vitamin B6 (pyroxidine) and can cause neurological problems in those who are susceptible, may be deficient in B6, and/or who consume high amounts.  The leaves are generally considered harmless, but it never hurts to be careful, especially if there is a history of seizures.

Also, many herbs are subject to “cold pasteurization” with gamma radiation, indicating that they could contain formaldehyde and formic acid, as well as unique radiolytic byproducts which may be toxic. Ask the manufacturer if they have tested their raw material for such exposure, or opt for a certified organic brand if accessible.

Finally, remember that accelerated aging and cognitive decline is not caused by a lack of herbs like gingko biloba, and therefore it is always best to first embark on significant lifestyle and dietary changes, including gentle detoxification strategies, than to fall prey to the allure of “magic bullets,” even natural ones.

Sayer Ji is an author, educator, Steering Committee Member of the Global GMO-Free Coalition (GGFC), advisory board member of the National Health Federation, and the founder of GreenMedInfo.com – an open access, evidence-based resource supporting natural and integrative modalities. His writings have been published and referenced widely in print and online, including Truthout, Mercola.com, The Journal of Gluten Sensitivity, New York Times and The Well Being Journal.

In 1995 Sayer received a BA degree in Philosophy from Rutgers University, where he studied under the American philosopher Dr. Bruce W. Wilshire, with a focus on the philosophy of science. In 1996, following residency at the Zen Mountain Monastery in upstate New York, he embarked on a 5 year journey of service as a counsellor-teacher and wilderness therapy specialist for various organizations that serve underprivileged and/or adjudicated populations. Since 2003, Sayer has served as a patient advocate and an educator and consultant for the natural health and wellness field.