Global Centralization Is The Cause Of Crisis – Not The Cure 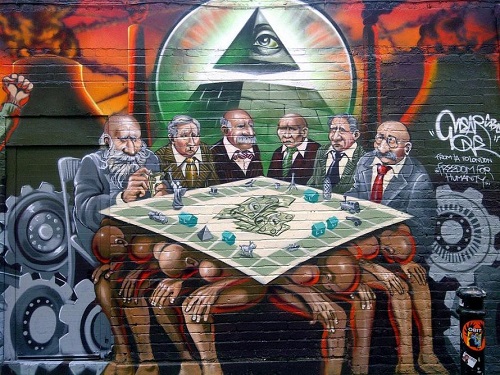 Global Centralization Is The Cause Of Crisis – Not The Cure

Once you understand the globalist mindset, almost everything they do becomes rather robotic and predictable.  It should not be surprising that the World Health Organization (WHO), a branch of the United Nations, has been so aggressive in cheerleading for the Chinese government and its response to the coronavirus outbreak. After all, China’s communist surveillance state model is a beta test for the type of centralization that the UN wants for the entire planet. They certainly aren’t going to point out that it was China’s totalitarian system that allowed the outbreak to spread from the very beginning.

Even now Xi Jinping is trying to rewrite history, claiming that he had been swift in responding to the crisis more than a month before he actually did.  The lie that the coronavirus mutated naturally in a food and animal market in Wuhan continues to be peddled by the mainstream media even though no evidence supporting this claim exists.  And China is still releasing rigged death and infection numbers while they have over 600 million people under martial law lockdown and their crematoriums continue pumping out the fumes of the dead 24 hours a day 7 days a week.

Brave health workers like Li Wenliang, who was punished by the government for warning about the virus in December, have died in the process of trying to fight against the centralized behemoth just to get vital information to the world, but that never happened, right? It was actually president Xi and the CPC that saved the day. The WHO and the CPC say so. You’ll never hear the UN praise the efforts of Li Wenliang; they want his name to disappear down the memory hole as much as the Chinese government does.

The developing narrative is a familiar one – Local officials “stifled” the response to the outbreak while the centralized national leadership put things back on track with extreme control measures that have turned the Hubei province into a veritable internment camp. Whatever you do, don’t point out that it was the national government’s habit of imprisoning health officials that release “false information” that led to the delayed reaction on the coronavirus. Also, don’t point out that ground zero for the outbreak is just down the road from the largest Level 4 Biohazard Lab in Asia, because that would make you a “conspiracy theorist”.

The message being pounded into the public consciousness is clear: “Shut up and accept that Centralization works”. Even when it fails miserably, it is still the answer to all our problems. All we have to do is “adjust” the historical record a little bit every time the system breaks and then institute even MORE centralization in response.

In other words, if the interdependent and draconian top-down structure of the globalist state leads to crisis, then it is because it was not centralized ENOUGH. Centralization always begets more centralization.

The failings of centralization have caused numerous problems long before it led to a potential pandemic. The pandemic simply clarifies the issue. For example, the breakdown in the global supply chain is becoming a bigger threat by the day.  The Baltic Dry Index a measure of shipping rates as well as global demand for goods, has essentially collapsed.  This should have been the first warning sign that the supply chain was in trouble, but the mainstream doesn’t pay attention to the fundamentals, only stock markets.  Enter Apple, one of the largest companies in the world, which has now abandoned its projections for 2020 and finally admitted that the shutdown of Chinese factories may just be a problem.

Some mentally challenged people out there are scoffing sarcastically at this issue, saying “Oh no, whatever will we do without i-Phones…?”.  They don’t grasp the wider implications.  If Apple’s production is going down because of the supply chain disruption then this is a signal that multiple companies and most of the economy are also going down because of supply chain disruptions. It’s not about i-Phones, it’s about the bigger picture.

Globalism has led to interdependent economies and nation states that no longer have redundancies in production. We have been forced to rely on production centers on the other side of the world for a vast majority of our goods.

When China shuts down, the US economy loses almost 20% of its supply chain. When Japan, Singapore, Taiwan, Hong Kong and Vietnam shut down from the virus, you can add another 10% to 15% on top of that. Retailers in the US represent around 70% of GDP. Cut off the supply chain in Asia and retailers lose a vast array of goods to sell. The US economy eventually shuts down also, even if the virus never spreads here.

Some people will argue that we don’t need all the “cheap plastic crap” from Asia anyway, and this situation is a “good thing”. Sorry to break it to you, but America’s economy is built on the selling of cheap plastic crap (along with the selling of the fiat dollar as the world reserve currency). Walmart (Chinamart if you discount agricultural products) is the largest employer in the US and the world, after all. Right or wrong, our economic system is so globalized that the fall of the Chinese dominoes will eventually knock down our own dominoes.

But when this disaster occurs and numerous national economies suffer from enforced globalist integration, guess what will happen next? The globalists will ride to our “rescue” with even greater centralization. This was their agenda all along.

Many people in the liberty movement are now aware of the Event 201 simulation, a war game run by globalists in the Bill and Melinda Gates Foundation and the World Economic Forum on a “theoretical” coronavirus pandemic that kills 65 million people. This simulation took place only a couple of months before the real thing exploded in China in December. But hey, maybe that’s all just amazing coincidence. What concerns me even more is the solution that was presented at the end of Event 201 – the creation of a centralized global financial body that would manage the international response to the outbreak.

Isn’t it amazing how every major catastrophe caused by globalism seems to lead to more globalism? One might start to wonder if some of these events were triggered by incompetence, or if they were deliberately engineered. At the very least, crisis events have been allowed to fester unchecked by organizations like the WHO as they continue to write off the coronavirus as a non-issue that is “well under control” by a Chinese government that caused it to spread in the first place.

So here is what is going to happen next:

Best case scenario is that the Western world is mostly unscathed by the virus itself but the economic supply chain suffers major setbacks. The global economy, which was already crashing over the past year due to historic levels of corporate and consumer debt, not to mention faltering exports and freight, is finally tipped over the edge. The massive Everything Bubble, fueled by a decade of inflationary central bank stimulus, implodes. Governments respond with totalitarian measures in the name of “protecting the public”.

Globalist institutions like the IMF step in and suggest that frail national monetary systems come under the management of their Special Drawing Rights basket in order to mitigate the debt crisis. Essentially, this is the first step to global governance.

Worst case scenario, the virus spreads throughout the US and Europe and governments respond the same way China’s government has; martial law and full blown concentration camp culture. This would lead to civil war in the US because we are armed and many people will shoot anyone trying to put us into quarantine camps. Europe is mostly screwed.

The establishment then suggests that paper money be removed from the system because it is a viral spreader. China is already pushing this solution now. Magically, we find ourselves in a cashless society in a matter of a year or two; which is what the globalists have been demanding for years. Everything goes digital, and thus even local economies become completely centralized as private trade dies.

A viral outbreak is a significant danger to us all, but an even greater threat is the supposed cure. Trading our economic and social freedom in the name of stopping the coronavirus?  No matter how deadly the bug, it’s just not worth it.

If you would like to support the work that Alt-Market does while also receiving content on advanced tactics for defeating the globalist agenda, subscribe to our exclusive newsletter The Wild Bunch Dispatch.  Learn more about it HERE.

With global tensions spiking, thousands of Americans are moving their IRA or 401(k) into an IRA backed by physical gold. Now, thanks to a little-known IRS Tax Law, you can too. Learn how with a free info kit on gold from Birch Gold Group. It reveals how physical precious metals can protect your savings, and how to open a Gold IRA. Click here to get your free Info Kit on Gold.